Memphis running back ready for NFL draft after opting out 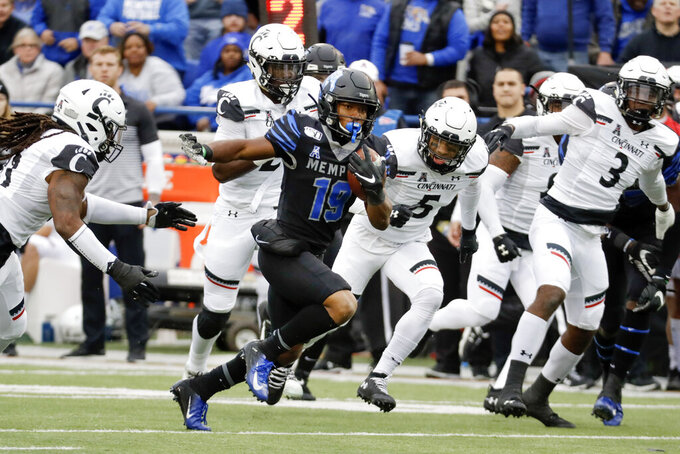 FILEm - Memphis running back Kenneth Gainwell (19) carries the ball against Cincinnati in the first half of an NCAA college football game in Memphis, Tenn., in this Friday, Nov. 29, 2019, file photo. Gainwell had every intention of playing football with the Memphis Tigers last fall, going through fall practice. The funeral for an uncle, the fourth member of his family to die of COVID-19 made opting out of the season the best decision for Gainwell. (AP Photo/Mark Humphrey, File)

Kenneth Gainwell had every intention of playing football with the Memphis Tigers, working throughout fall practice. Six days before the season opener, the running back changed his mind.

The funeral for an uncle, the fourth member of his family to die of COVID-19, made opting out of the 2020 season not just the best but the only decision for Gainwell. Not to protect his hopes of a professional future, but to keep his family safe during the coronavirus pandemic.

“Just getting the chance to talk to my family ... about COVID,” Gainwell said. “You know my family passing away, so it was a tough, tough decision. I love football. So it was really a tough decision to do, so I just had to do what was best for the fam.”

After spending the past few months studying and training for his future, the running back from Yazoo City, Mississippi, hopes to be selected in the upcoming NFL draft despite a track record of only 18 games at Memphis.

“That moment will be very, very special because it will show the young guys back in the county it’s possible," Gainwell said. "You can do it. You can do as much as you can, but you know that you can make it, you know so. It would be very important for me for the guys that’s back there.”

After deciding to opt out, Gainwell went to work. He started training in Memphis, then went to Orlando in November. He worked out and studied until just before coming back to Memphis with pro days replacing the NFL combine.

“It was kind of a difficult decision, you know, leaving the team that I loved dearly and just getting myself prepared and just being as safe and doing what I got to do to prepare for myself,” Gainwell said.

Gainwell played only four games in his first season on campus in 2018 and wound up redshirting after four carries for 91 yards. The reason? He was behind Darrell Henderson and Tony Pollard, both now in the NFL.

Gainwell put on a show in 2019 with six straight 100-yard rushing games. Against Tulane, he ran for 104 yards and a touchdown while adding 203 yards and two more TDs through the air for the first such performance by a player in the Football Bowl Subdivision since 1997. He finished with 1,419 yards and 13 touchdowns in 14 games, helping Memphis to a 12-2 record and the Cotton Bowl.

He also had 610 yards and three TDs receiving to lead all FBS freshmen with 2,069 all-purpose yards. He joined former NFL running back DeAngelo Williams and Henderson as the only players in school history to top 2,000 all-purpose yards in a season.

Gainwell won the second Shaun Alexander Freshman of the Year from the Football Writers Association of America. Trevor Lawrence won the inaugural award.

The pandemic prevented Alexander from giving Gainwell the award until March before Memphis' pro day. Alexander has seen enough of the running back to expect him to be very successful in the NFL. He compared Gainwell to Le'Veon Bell, with his explosion and shiftiness allowing him to duck inside of tackles and take off.

Count Alexander among those who would have loved to see Gainwell play in 2020.

“But it made sense for his situation,” Alexander said. "This year was crazy for everybody. But to see that kind of passion and to see that kind of speed and see his size, which is a great size for a running back, especially in today’s game, he’s going to do really well.”

Better yet, Alexander sees a drive in Gainwell to make opponents pay.

“He plays like he’s going to try to dominate you in such a way that you actually just wish the game would end faster so that he can get off the gas pedal," Alexander said.

Gainwell knows he has doubters based on his resume or size. He said they better be ready because he's been working hard to be exactly that for the NFL.