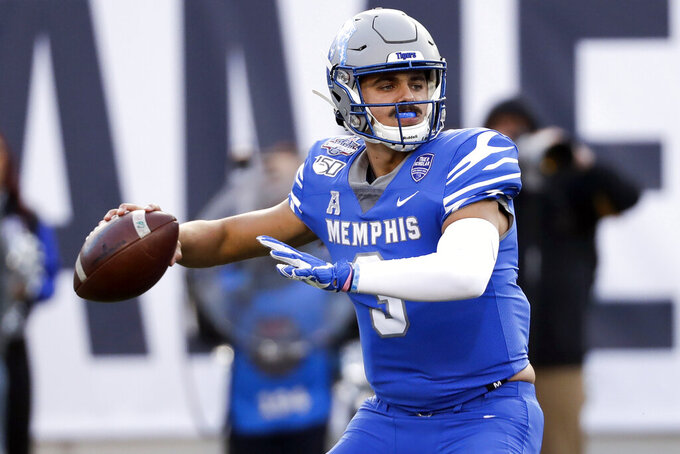 The Memphis Tigers want to make sure they don't skip a beat with Ryan Silverfield now their third different coach in six seasons.

The Tigers won their first American Athletic Conference championship last December only to lose Mike Norvell to Florida State four seasons after he replaced Justin Fuente. Silverfield replaced Norvell and coached Memphis to a 53-39 loss to Penn State in the Cotton Bowl.

“We're fortunate because I am a new head coach that's been in place now going on my fifth year where most of these guys know me,” Silverfield said. “They know that the way I would do things, the way that we work and everything is going to be to have their best interests in mind. And that’s the key to this whole thing.”

The Tigers have lots of talent to defend their American championship. Silverfield has his quarterback and top wide receiver back with both Brady White and Damonte Coxie deciding to return for their season seasons.

“Obviously Brady White and some of our veterans coming back will certainly make it easier for us in the field to have success because of the type of talent they are, but also the type of young man they are having an understanding of our offense,” Silverfield said.

The American will start conference play Sept. 19 with each team playing eight games on the dates originally scheduled. Each school can play nonconference games with opponents required to adhere to the AAC's protocols for testing and game operations.

The league also built in some flexibility because of the pandemic. The American's championship game will be played on either Dec. 5, 12 or 19 at the stadium of the regular-season champ. The conference will wait until at least Nov. 1 to decide.

Memphis is one of five American teams that won 10 or more games last season. Cincinnati posted its second straight 11-win season, going 11-3 with two of those losses to Memphis on the Tigers' home field. Navy went 11-2, while SMU and UCF went 10-3.

Cincinnati goes into the season as the highest ranked team at No. 20 followed by UCF at No. 21. Memphis is just outside the Top 25 as the first team receiving votes.

Shane Buechele is back for SMU after leading the conference with 302.2 yards passing. Better yet, he gets back one of his top receivers in 6-foot-4 Reggie Roberson Jr. His season ended in the eighth game by a foot injury that kept him from leaving early for the NFL draft.

McKenzie Milton is practicing again with UCF in his recovery from the knee injury that nearly cost him his right leg in November 2018. UCF coach Josh Heupel said how Milton's recovery continues will lead to a decision about this season or next season. If Milton isn't available this season, Heupel has Dillon Gabriel.

He turned in one of the best passing seasons in UCF history as a freshman, he started 12 games and helped the Golden Knights rank second nationally in total offense and eighth in passing averaging 316.7 yards per game. He ranked fourth in the country averaging 15.4 yards per pass completion.

Cincinnati has quarterback Desmond Ridder to help offset the loss of top rusher Michael Warren II who left early for the NFL. Ridder ran for 105 yards and three touchdowns leading Cincinnati to a rout of Boston College in the Birmingham Bowl.

Memphis lost the American's top returning rusher when Kenneth Gainwell decided to opt out of this season. He's on The Associated Press preseason All-American second team. Silverfield said Monday that he could not discuss any players who chose to pot out until paperwork had been finished.

Gainwell shared his decision Monday night on Twitter, calling it the toughest of his life. But the redshirt sophomore wrote he just lost his third family member to COVID-19 and needs to look after his family.

Memphis and SMU are set to be the first teams to play games in the American with Memphis hosting Arkansas State and SMU going to Texas State on Saturday. Navy hosts BYU on Monday, while East Carolina hosts Marshall on Sept. 12. The extra playing time could give those teams an early boost compared to some others.

Cincinnati lost three of its first four games and pushed back its opener against Austin Peay to Sept. 19 instead of Sept. 3 to avoid going a month between games. Temple lost games against Idaho and UMass and will debut Sept. 26 against Navy, which will have played two games by then.