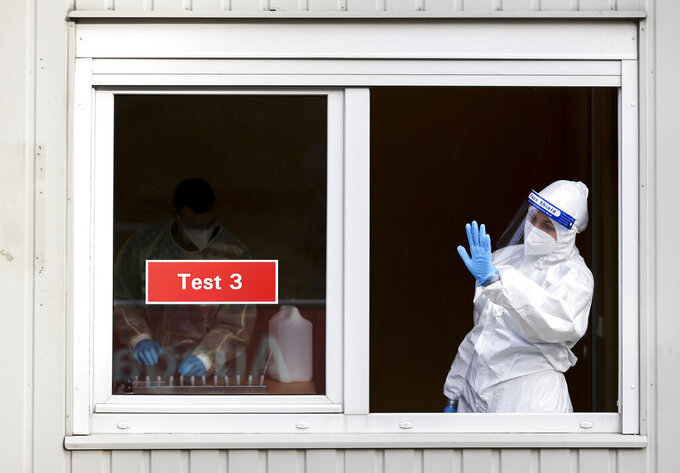 A woman in protective clothing beckons test takers to her window at a test center with the start of the model project in ugustusburg, Germany, Thursday, April 1, 2021. After five months of lockdown, hotels and restaurants here have reopened to private visitors. ( Jan Woitas/dpa via AP)

BERLIN (AP) — German Chancellor Angela Merkel asked citizens Thursday to consider the strain that nurses and doctors are under as they care for a rising number of COVID-19 patients and help them by respecting social distancing and other rules over Easter.

Germany's disease control agency reported 24,300 newly confirmed cases in the past day, and 201 deaths. The head of the Robert Koch Institute has warned that the country is seeing a third surge in infections fueled by more contagious virus variants that have come to dominate the outbreak in Germany.

“There needs to be a quiet Easter festival,” Merkel said in a video address. “I urgently ask you to refrain from all non-urgent travel (and) that we all consistently follow the rules.”

Germany has recorded more than 2.8 million COVID-19 cases and 76,543 deaths since the start of the outbreak, fewer than most other large European countries. But there has been frustration about the slow pace of its vaccination program, with only about 11.6% of the population having received at least one shot by Wednesday.

In contrast, Britain has given one vaccine shot to 46% of its people.

Merkel said she understood the disappointment felt by many Germans that they face celebrating another Easter without friends or family, but insisted that the vaccine campaign will pick up this month.

Health Minister Jens Spahn said routine vaccinations will begin in doctors' practices on Tuesday, with 35,000 GPs scheduled to receive 940,000 vaccine doses next week. He said that will rise to 3 million a week by the end of April. Until now, shots have mainly been administered in special vaccine centers and by mobile teams visiting nursing homes.

Germany expects to receive about 40 million vaccine doses during the second quarter. That includes millions of doses of the AstraZeneca shot, which Germany this week said should only routinely be given to people 60 and over amid concerns about possible rare blood clots.

German President Frank-Walter Steinmeier, who is 65, on Thursday chose to get inoculated with the AstraZeneca vaccine made by the British-Swedish company, which both the European Medicines Agency and the World Health Organization have said is safe.

Merkel, who is 66, says she would be prepared to take the AstraZeneca vaccine. But it isn’t yet clear whether and when that might happen.

Her appeal for Germans to respect pandemic rules comes as cities are trying to crack down on gatherings in parks and other public spaces over the weekend. On Wednesday evening, police in Berlin were pelted with stones and bottles as they tried to disperse hundreds of people at a park.

Starting Friday, authorities in Berlin say between 9 p.m. and 5 a.m. people will only be allowed to go outside alone or in pairs. During the day, a maximum of five people from two households can gather outside, not counting children under 14.

Berlin Mayor Michael Mueller said kindergartens will be closed except for those who need emergency day care, such as police officers. Access to nonessential stores in Berlin is only permitted for people who can show they've tested negative for COVID-19.