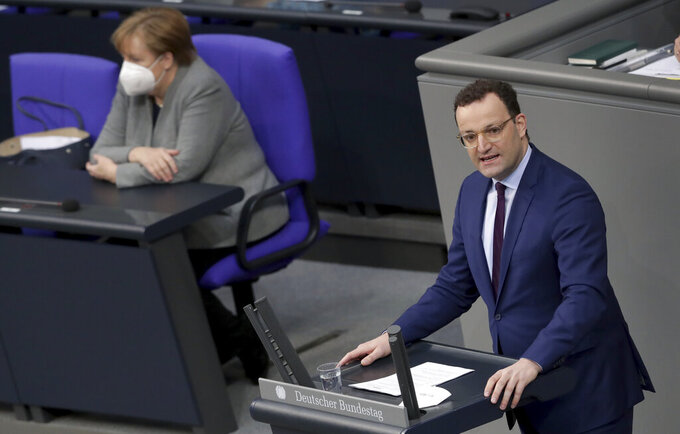 File - In this Wednesday, Jan. 13, 2021 file photo German Chancellor Angela Merkel listen to German Health Minister Jens Spahn holding a speech on the current developments of the new coronavirus pandemic in Germany at a meeting of the parliament, Bundestag, in Berlin, Germany.German Chancellor Angela Merkel's center-right party, the Christian Democratic Union, CDU, is choosing a new leader on the weekend Saturday Jan. 16 and Sunday Jan. 17, 2021, a decision that will help determine who succeeds Merkel at the helm of the European Union's biggest economy after a 16-year reign. (AP Photo/Michael Sohn, file)

BERLIN (AP) — Chancellor Angela Merkel opened a party convention Friday that will see members choose a new leader of her center-right Christian Democrats, a decision that will help shape German voters' choice of her successor after 16 years in office.

Merkel, 66, has been looked on by many as a bedrock of stability at the helm of Europe's largest economy through multiple crises, most recently the coronavirus pandemic, but said two years ago she will not seek a fifth term as chancellor.

In an opening statement, Merkel said that since she was first elected chancellor in 2005 the world had “changed dramatically,” noting the rise of Chinese power and the ubiquity of smart phones. She rattled off a laundry-list of accomplishments including the reduction of unemployment to historic lows, the implementation of a minimum wage, a regularly balanced budget and a drastic increase in the use of renewable energy.

In the online convention, members of the Christian Democratic Union are choosing Saturday between three men to take over as leader of the party, a role that Merkel gave up in 2018. That person will either run for chancellor in Germany's Sept. 26 election, or have a large say in who does.

Merkel's preferred candidate, Annegret Kramp-Karrenbauer who took over as party leader when Merkel herself stepped down, announced her resignation last February after failing to impose her authority on the party.

There is no clear front-runner among the three candidates: Friedrich Merz, a 65-year-old who is more conservative than Merkel and has been in the private sector for about a decade; Armin Laschet, the 59-year-old governor of North Rhine-Westphalia who is viewed as likely to continue Merkel's centrist approach; and Norbert Roettgen, 55, who was fired by Merkel as environment minister and calls himself a candidate for the “modern center.”

Analysts predict no candidate will emerge after the first ballot as the clear winner, prompting a run-off vote between the top two.

The latest polls suggest, however, that the strongest candidate for chancellor is none of the three, but rather Markus Soeder, the leader of the Christian Democratic Union's Bavarian-only sister party, the Christian Social Union.

Soeder, the Bavarian governor, has gained in stature during the coronavirus pandemic as a strong advocate of tough restrictions.

In a poll released Friday by ZDF public television, Soeder was seen by voters asked a yes/no question as the politician most suitable for chancellor, with 54 percent saying yes.

By comparison, Roettgen and Merz both polled 29 percent, while Laschet sat at 28.

Current Health Minister Jens Spahn, himself a member of Merkel's CDU, got 32 percent and is seen by many within the party as a possible candidate for chancellor himself.

The poll, conducted Jan. 12-14 over the phone by Mannheim's Forschungsgruppe Wahlen, had a margin of error of plus or minus three percentage points.