Messi leads Barcelona to win over Elche in Spanish league 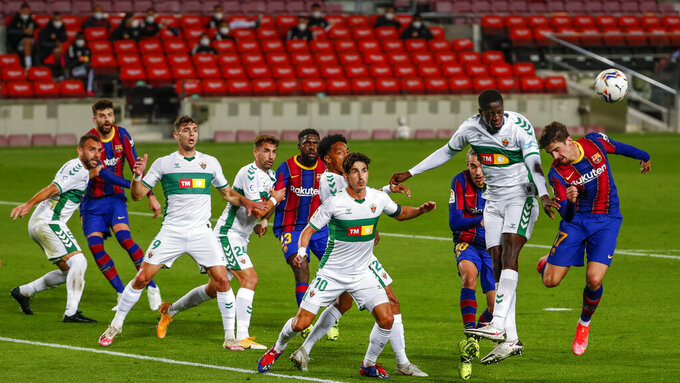 MADRID (AP) — Lionel Messi scored twice in the second half as Barcelona stayed near the top of the Spanish league by defeating Elche 3-0 on Wednesday in a match postponed from the first round because of the coronavirus pandemic.

Jordi Alba also scored after the break to help Barcelona move back to third place in the league standings, two points behind second-place Real Madrid and five from leader Atlético Madrid, which still has a game in hand.

Barcelona was coming off two consecutive setbacks at home — a 4-1 loss to Paris Saint-Germain in the first leg of the round of 16 of the Champions League and a 1-1 draw against Cádiz in the Spanish league.

“This win helps boost the team's morale," Alba said. “It wasn't easy after the draw (in the league) and the loss in the Champions League. But we are still fighting for the league title, there are still a lot of matches left. We have to keep fighting.”

Wednesday's match was postponed as Barcelona was among the clubs given extra time to rest after playing in the Champions League late into last season.

“We struggled in the first half despite controlling the game,” Alba said. “Leo’s goals put us at ease in the second half and then we could add the third.”

Messi reached 18 league goals with his double, moving two ahead of Atlético Madrid’s Luis Suárez — his former Barcelona teammate — at the top of the scoring list. The Argentina star has scored 13 goals in his last 12 matches in all competitions, and six in his last four.

Messi opened the scoring at the Camp Nou Stadium in the 48th minute with a shot from inside the area after a give-and-go exchange of passes with Martin Braithwaite, then added to the lead in the 68th after picking up a pass from Frenkie de Jong and fending off a few defenders before finding the net.

Alba closed the scoring in the 73rd after being set up by Braithwaite and Messi.

It was a fourth loss in six matches for Elche, which dropped to second-to-last in the 20-team standings. It had defeated Eibar in the previous round to end a 16-game winless streak in the league.

Barcelona's next two matches are against Sevilla — on Saturday in Seville in the Spanish league and on Wednesday at home in the second leg of the Copa del Rey semifinals. The Catalan club lost the first leg 2-0 away.

The second leg against PSG in the Champions League will be on March 10 in Paris.