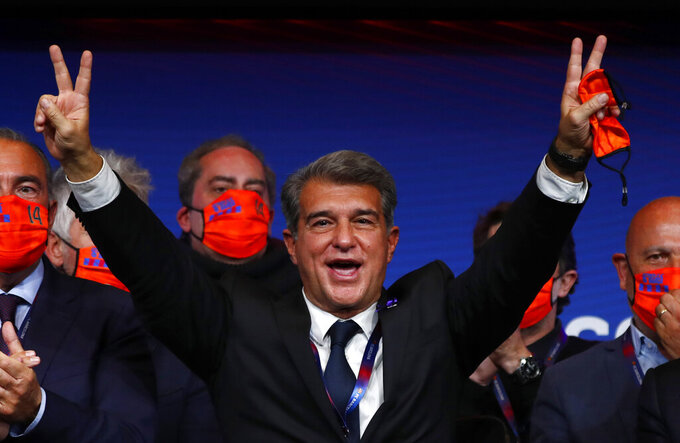 Joan Laporta celebrates his victory after elections at the Camp Nou stadium in Barcelona, Spain, Sunday, March 7, 2021. Joan Laporta has been elected Barcelona's president on Sunday, inheriting a club mired in debt and facing daunting problems that include the possible departure of Messi when his contract ends at the end of the season. (AP Photo/Joan Monfort)

Messi was at Laporta's inauguration at the Camp Nou Stadium and embraced the new president during the ceremony.

One of Laporta's biggest tasks will be to try to change Messi's mind after he pushed to leave the club last season. He had his request denied by former president Josep Bartomeu but can leave for free when his contract expires at the end of this season.

“I'll do whatever I can to keep Messi from leaving,” Laporta said, adding that he was certain the star player wouldn't be considering leaving if the stands weren't empty because of the pandemic.

Another big task for Laporta will be to restructure the club's finances amid debts of more than 1 billion euros ($1.2 billion) caused in large part by of the coronavirus pandemic.

This will be Laporta's second spell as Barcelona president. He was also in charge from 2003-2010, when Messi began playing at the club and when it had some of its greatest success.

Laporta also embraced captain Gerard Piqué, who also attended the inauguration along with Messi and Sergi Roberto. Coach Ronald Koeman also was at the ceremony.

“We were very happy then and we will be very happy again,” Piqué wrote on Twitter. “Congratulations Joan Laporta.”