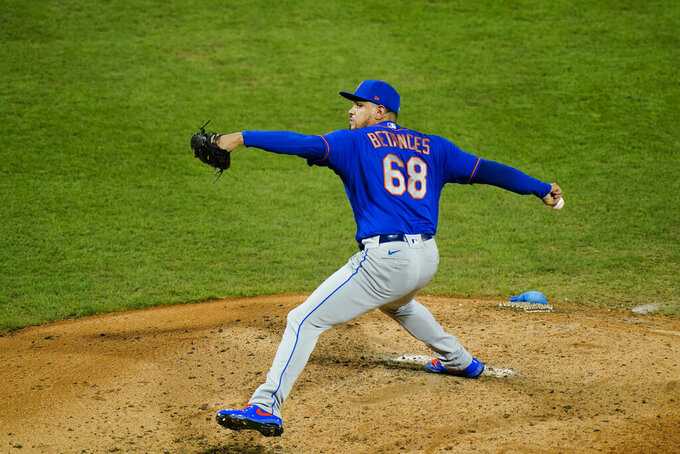 NEW YORK (AP) — Reliever Dellin Betances exercised his $6 million player option for next season with the New York Mets on Sunday, deciding against taking a $3 million buyout and becoming a free agent.

A 6-foot-8 right-hander who turns 33 on March 23, Betances signed with the Mets last December for a deal that guaranteed $10.5 million: a $5.3 million million signing bonus and a $2.2 million salary plus the option for 2021.

A four-time All-Star during seven seasons with the New York Yankees, Betances slumped to a 7.71 ERA in 15 relief appearances with the Mets, walking 12 and striking out 11 in 11 2/3 innings.

He struck out 115 in 66 2/3 innings with the Yankees in 2018, then missed nearly all of 2019 due to a bone spur behind his right shoulder. He returned to make his season debut Sept. 15 at Toronto, but his season ended after two batters and eight pitches wen he partially tore the Achilles tendon in his left foot when he hopped on the mound after striking out Brandon Drury.

New York also said it had made an $18.9 million qualifying offer to right-hander Marcus Stroman, who became a free agent. The 29-year-old right-hander was acquired from Toronto on July 28, 2019, for left-hander Anthony Kay and right-hander Simeon Woods Richardson. Stroman went 4-2 with a 3.77 ERA in 11 starts for the Mets late that season, then opted out of the 2020 season due to the novel coronavirus pandemic.