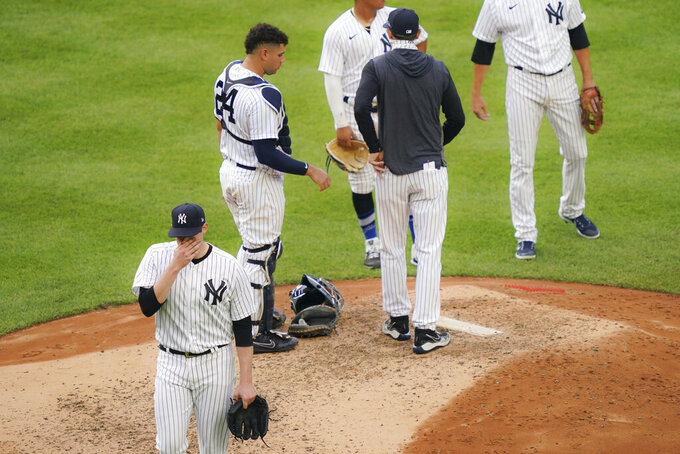 Amed Rosario hit a walkoff, two-run homer to lift the Mets to a 4-3 victory in the nightcap — a bizarre scene in the Bronx, where the Yankees batted first as the visiting team in the makeup of a game postponed last weekend.

The sweep sent the Yankees to their seventh straight loss.

Rosario connected off closer Aroldis Chapman (0-1) with pinch-runner Billy Hamilton at second base. Chapman walked Jeff McNeil to open the inning, and Hamilton promptly stole second despite being picked off by the All-Star left-hander.

Rosario then cranked his third home run of the season into the left field seats, setting off the second big celebration in the visiting dugout as the Mets swept the Yankees in a doubleheader for the first time.

Smith, a 25-year-old Black man, wept Wednesday night reflecting on a recent shooting by police of a Black man in Wisconsin. Smith and the Mets were all smiles after his decisive solo shot against Chad Green in the sixth inning on what was Jackie Robinson Day around the majors. Both teams wore No. 42 for the nightcap only.

Alonso pounded on the dugout railing and the Mets bench went wild while Smith rounded the bases at Yankee Stadium. Inspired by the emotional comments from the usually upbeat Smith, the Mets staged a walkout protest against racial injustice with the Miami Marlins on Thursday night.

“With what he’s lived in the last two days emotionally, and what we lived, too, supporting him as well, it was pretty special, for sure,” Mets manager Luis Rojas said.

Smith was not made available to reporters between games despite a rain delay before Game 2.

“Just a great human being,” said Michael Wacha, who is in his first season as Smith’s teammate. “Very passionate, just loves this game more than anything. One of the best teammates I’ve been around. It’s been an honor to lace them up with him."

The teams are set to play five games in three days to make up for games at Citi Field postponed last weekend after two members of the Mets tested positive for the coronavirus.

Smith’s drive followed a tying three-run shot by the struggling Alonso, and Jake Marisnick also connected in the inning against Green (2-2), who had been the Yankees' most reliable reliever this season.

“I think he got a couple pitches where he wanted, they just put better swings on it,” Yankees manager Aaron Boone said.

Mets reliever Dellin Betances, making his first appearance against his former team, allowed two runners in the sixth but escaped on Gary Sanchez’s popup. Edwin Díaz struck out the side in the ninth for his second save.

Clint Frazier homered, drove in three and reached base four times for the Yankees as a fill-in for injured Aaron Judge. New York's everyday right fielder was placed back on the 10-day injured list Friday with a recurrence of a left calf strain after aggravating the injury in his return from the IL on Wednesday.

Yankees left-hander Jordan Montgomery pitched one-run ball through five innings but allowed singles to J.D. Davis and Michael Conforto leading off the sixth before Green relieved to face Alonso. The 2019 NL Rookie of the Year was hitting .184 with runners in scoring position before sending Green's 3-2 fastball out to center field.

Walker Lockett (1-0) pitched two scoreless innings in relief for the Mets. He was designated for assignment between games to create roster space for nightcap starter David Peterson.

Jared Hughes (1-1) pitched a perfect seventh inning for the Mets.

Boone broke down in tears during a pregame press conference and left the room when he was asked about his two Black adopted sons. He returned a few minutes later, still shaken.

“I would just say, I know I’m talking to a lot of people out there, it’s a hard, heavy year, and a heartbreaking year in so many ways,” Boone said. “For my family, too. But I think that’s the case for a lot of people of all different backgrounds and races.

“My prayer is just that we can continue to, even though we’re going through some dark times, at the end of this, we’re better for it. That’s my continued prayer.”

Boone said he will donate his paycheck Friday to The Players Alliance, a group of more than 100 current and former Black major leaguers working to combat racial injustice.

Yankees outfielder Estevan Florial singled in the fifth inning of the opener for his first major league hit in his debut, and Mets catcher Ali Sánchez got his first big league hit in the late game.

Yankees: 3B Gio Urshela was held out with a bone spur in his right elbow and is day to day. ... LHP Luis Avilán was released.