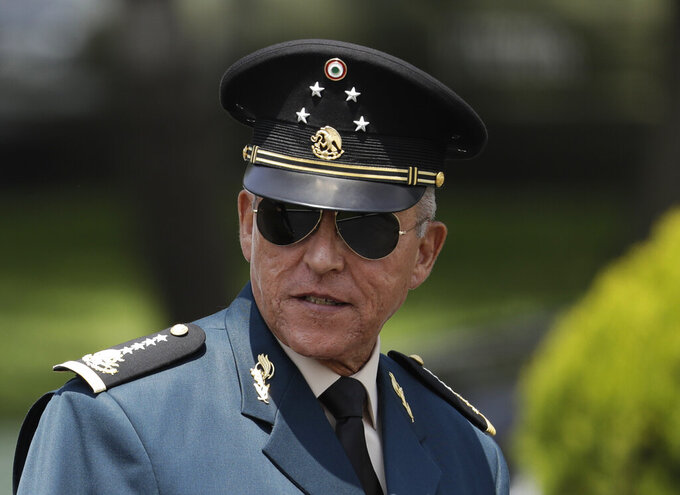 FILE - In this Sept. 14, 2016 file photo, Secretary of Defense Salvador Cienfuegos Zepeda arrives for a review of the troops that will participate in the Independence Day parade, in Mexico City. Mexican prosecutors on Thursday, Jan. 14, 2021, declared completely unfounded the U.S. case against Cienfuegos who was arrested on drug charges in the United States and then returned under pressure from the Mexican government. (AP Photo/Rebecca Blackwell, File)

MEXICO CITY (AP) — Mexican President Andrés Manuel López Obrador said Friday that the U.S. Drug Enforcement Administration had “fabricated” drug trafficking accusations against his country's former defense minister and then his government published what he said was the entire case file provided by U.S. authorities when they sent him back to Mexico.

The unprecedented move came one day after Mexico’s Attorney General’s Office announced it was dropping the drug trafficking case against retired Gen. Salvador Cienfuegos. The 751-page file included transcripts of intercepted Blackberry messenger exchanges that were marked: “Shared per court order, not for further distribution.”

It wasn't immediately clear if release of the documents would affect other court cases in the U.S.

The U.S. government dropped its charges against Cienfuegos in November in a diplomatic concession to the important bilateral relationship and sent him back to Mexico, where he was immediately released.

López Obrador said there was a lack of professionalism in the U.S. investigation and suggested that there could have been political motivations behind U.S. authorities' arrest of Cienfuegos at Los Angeles International Airport in October, noting that the investigation had been ongoing for years, but the arrest came shortly before U.S. presidential elections.

The U.S. government quickly responded that it reserved the right to prosecute Cienfuegos in the future. López Obrador's comments threatened to get the security relationship with the incoming administration of President-elect Joe Biden off to a rocky start.

López Obrador said Friday that Mexican prosecutors had dropped the case because the evidence shared by the United States had no value to prove he committed any crime.

“Why did they do the investigation like that?” López Obrador said. “Without support, without proof?”

The released documents include purported text messages from December 2015 between two drug gang figures based in Nayarit state that refer to a meeting at the Defense Department with a man they describe as ”The Godfather” at one point and as “Salvador Sinfuego Sepeda” at another.

In the exchange between Daniel Silva-Garate and Juan Francisco Patrón Sánchez, both of whom later were killed, Silva-Garate describes being picked up by men with short, military-style haircuts who tell him they are going to the Defense Department headquarters in Mexico City and describe a meeting with “The Godfather.”

He wants you to work so there is a crapload of money,” Silva Garate texts his boss. “We have to do something from Colombia.”

Silva-Garate tells his boss the “The Godfather” told him “Now we are going to do big things with you … that what you have done is small-time.”

Patrón Sanchez says he wants unmolested routes to ship drugs from Colombia and Silva Garate texts back, “He says that as long as he is here, you will be free … that they will never carry out strong operations,” or raids.

Silva Garate tells his boss the “The Godfather” told him that, “You can sleep peacefully, no operation will touch you.”

Speaking at his daily news conference Friday, López Obrador insisted his government would cover up for no one.

López Obrador acknowledged that many Mexicans have confidence in the U.S. justice system, seeing them as “the good judges, flawless, those don’t make mistakes, those are honest."

“In this case, with all respect, those that did this investigation did not act with professionalism,” he said.

Nicole Navas Oxman, acting deputy director of public affairs at the U.S. Department of Justice said, “The United States reserves the right to recommence its prosecution of Cienfuegos if the Government of Mexico fails to do so.”

In a statement Thursday night, Mexico’s Attorney General’s Office went beyond just announcing it was closing the case by clearing the general entirely.

“The conclusion was reached that General Salvador Cienfuegos Zepeda never had any meeting with the criminal organization investigated by American authorities, and that he also never had any communication with them, nor did he carry out acts to protect or help those individuals,” the office said in a statement.

It said Cienfuegos had not been found to have any illicit or abnormal income, nor was any evidence found “that he had issued any order to favor the criminal group in question.”

A seven-year investigation by the U.S. authorities was completely disproved by Cienfuegos within five days of having the U.S. evidence shown to him, the statement said.

All charges were dropped and Cienfuegos, who was never placed under arrest after he was returned by U.S. officials, is no longer under investigation.

López Obrador asked why he'd been arrested so close to the U.S. election. “What was the message? Who from? What were they trying to do, weaken the Mexican government, weaken Mexico’s armed forces, spark a conflict with the current government?”

Gladys McCormick, an associate professor in history at Syracuse University’s Maxwell School of Citizenship and Public Affairs, said the only surprise was that Mexico didn’t make a better show of looking into Cienfuegos.

“One would think that they would have at least followed through on some semblance of an investigation, even if it was just to put some window dressing on the illusion that the rule of law exists,” McCormick said. “From the Mexican side, this signals the deep-seated control the military as an institution has on power. It also shows that the level of complicity at play in this case.”

López Obrador has given the military more responsibility and power than any president in recent history, relying on it to build massive infrastructure projects and most recently to distribute the COVID-19 vaccine, in addition to expanded security responsibilities.

Cienfuegos was arrested after he was secretly indicted by a federal grand jury in New York in 2019. He was accused of conspiring with the H-2 cartel in Mexico to smuggle thousands of kilos of cocaine, heroin, methamphetamine and marijuana while he was defense secretary from 2012 to 2018.

Prosecutors said intercepted messages showed that Cienfuegos accepted bribes in exchange for ensuring the military did not take action against the cartel and that operations were initiated against its rivals. He was also accused of introducing cartel leaders to other corrupt Mexican officials.

Under the pressure of Mexico’s implicit threats to restrict or expel U.S. agents, U.S. prosecutors dropped their case so Cienfuegos could be returned to Mexico and investigated under Mexican law.

Acting U.S. Attorney Seth DuCharme told a judge at the time, “The United States determined that the broader interest in maintaining that relationship in a cooperative way outweighed the department’s interest and the public’s interest in pursuing this particular case.”

Even though the U.S. yielded on Cienfuegos, Mexico’s Congress a few weeks later passed a law that will restrict U.S. agents in Mexico and remove their diplomatic immunity.

Those restrictions, combined with dropping the case against Cienfuegos and suggesting the DEA made up the case against Mexico's former defense secretary, could sour the security relationship for the Biden administration, experts say.

“It is surely going to be a relationship of much more mistrust,” said Ana Vanessa Cárdenas Zanatta, a political science professor at Monterrey Technological and Anahuac universities in Mexico City. “This gives Biden all of the cards to distrust the relationship with Mexico so that they continue in secrecy and resume the pressure on the Mexican government of ’what are you doing in the fight against drug trafficking?'”

Mike Vigil, the Drug Enforcement Administration’s former chief of international operations, said clearing Cienfuegos “could be the straw that broke the camel’s back as far as U.S.-Mexico cooperation in counter-drug activities.”

“It was preordained that Mexican justice would not move forward with prosecuting General Cienfuegos,” Vigil said. “It will greatly stain the integrity of its judicial system and despite the political rhetoric of wanting to eliminate corruption, such is obviously not the case. The rule of law has been significantly violated.”