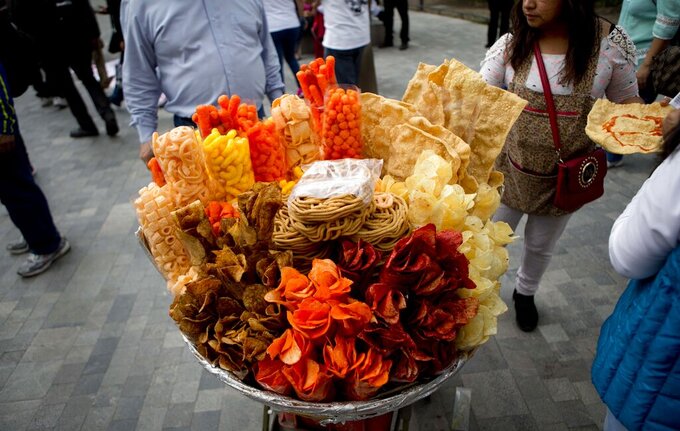 FILE - In this July 5, 2016 file photo, a street vendor sells fried snack food in Mexico City. As more states propose or approve bans on junk food sales to minors, Mexico is seeing the tide turn against high-calorie snacks that experts say have given the country one of the highest rates of childhood obesity and an unusually young coronavirus death toll. (AP Photo/Eduardo Verdugo, File)

MEXICO CITY (AP) — As more states propose or approve bans on junk food sales to minors, Mexico is seeing the tide turn against high-calorie snacks that experts say have given the country one of the highest rates of childhood obesity and an unusually young coronavirus death toll.

The Gulf coast state of Tabasco passed restrictions on the sale of sugary bottled drinks and high-carbohydrate snacks this week, less than two weeks after the southern state of Oaxaca became the first to do so. Legislators in several more states have introduced similar bills, all of which forbid merchants from selling “junk” food to minors unless their parent or guardian is present and approves.

In the northern state of Chihuahua, Rep. Rene Frias introduced a bill “to guarantee our children and youths a healthier diet and to fight obesity and excess weight.” The bill has not yet been voted on.

In Mexico City, the country's largest retail market, Mayor Claudia Sheinbaum said earlier this month “we are working with legislators to see if it is feasible to get similar legislation in Mexico City.”

Some of the measures also would ban vending machines from dispensing such foods and prohibit their sale in or near schools.

The issue has come to a head with the coronavirus pandemic with Mexico having the third highest confirmed COVID-19 death toll in the world, trailing only the United States and Brazil. The government revealed that among the 57,774 Mexicans who have died, high blood pressure and obesity were the chief underlying conditions that may have complicated the disease, with diabetes a close third.

The government's point man on the epidemic, Hugo López-Gatell, has been a big supporter of the junk food measures — as well as recently enacted mandatory warning labels on high-calorie food — in part because about half of Mexico's deaths from the virus were people under 65, something he has blamed on obesity and bad diets. He has singled out soft drinks, which he called “bottled poison.”

But defining “junk food” has become a major challenge in writing the new laws — Oaxaca is still working on drawing up its list — in part because there are a lot of traditional Mexican snack foods that are loaded with sugar, salt and calories.

For example, the drink known as “chilate” — variations are known in southern Mexico states as pozol, tejate and a host of other names — has a laundry list of high-calorie ingredients: chocolate, sugar, ground corn or rice, and even sometimes ground-up cookies. It has been consumed in Mexico in some form for hundreds of years. Traditional Mexican sweets are usually almost entirely made up of sugar, salt, tamarind and lime.

But because of political and economic concerns and national pride, the lawmakers want to avoid touching traditional snack foods, and instead seek to focus on packaged foods made by multinational companies.

The Tabasco law, passed on a 22-8 vote on Monday, uses verbal gymnastics to try to avoid including traditional snacks in the ban.

It may be a long haul to enforce the new law, because many packaged snack foods like Doritos chips have already been firmly integrated into Mexican food culture, with “Dorilocos” now a staple at Mexican parks. Preparing “Dorilocos” involves splitting open a bag and adding as many as a dozen ingredients to the chips, some healthy — like celery or tomato — and some decidedly not so, like salted nuts or gummy bears.

The U.N. Children’s Fund considers childhood obesity to be a health emergency in Mexico, saying the country’s children have the highest consumption of junk food and many get 40% of their total caloric intake from it.

Business groups, who complain about the impact the laws will have on tens of thousands of small stores and street stands that make much of their money selling snacks, say the new laws will only lead to a black market.

The National Association of Small Store Owners criticized the wave of new laws, under which store owners could face fines or charges for selling to children, suggesting they could lead kids to go to unlicensed vendors to get their snack fix.

“History demonstrates that this kind of measure, instead of reducing consumption, increases it. Prohibition promotes informal sales, illegality and evasion, with absolutely no health safeguards,” the association’s president, Cuauhtémoc Rivera, said in a statement.