Mexico urges end to harassment of health workers in pandemic 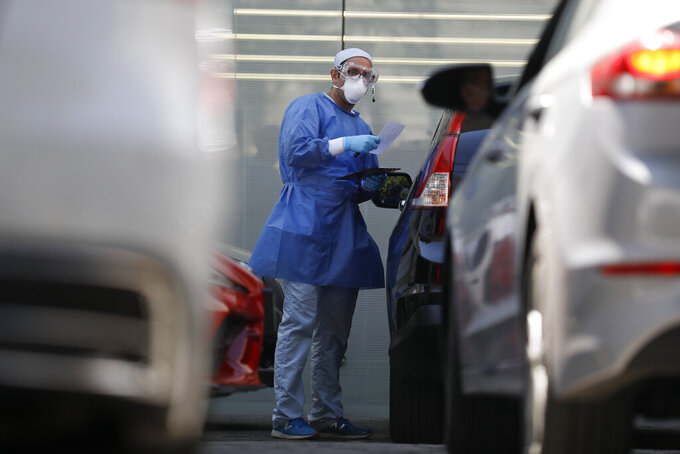 A doctor gathers information from drivers arriving to get tested for COVID-19 at private laboratory Biomedica de Referencia, in the Lomas Virreyes neighborhood in Mexico City, Thursday, March 26, 2020. The new coronavirus causes mild or moderate symptoms for most people, but for some, especially older adults and people with existing health problems, it can cause more severe illness or death.(AP Photo/Rebecca Blackwell)

MEXICO CITY (AP) — They are the first line of defense against the COVID-19 pandemic, but in parts of Mexico, doctors, nurses and other health workers are being harassed to the point that federal authorities have pleaded for Mexicans to show solidarity.

While tributes to courageous medical personnel putting themselves in the virus' path circle the globe, Mexico and some other places have seen disturbing aggression born of fear.

Recently, a hospital in Guadalajara — Mexico's second-largest city — were told to wear civilian clothes to and from work rather than their scrubs or uniforms because some public buses refused to allow them to board. Other medical personnel have reported attacks and this week someone threw flammable liquid on the doors of a new hospital under construction in the northern border state of Nuevo Leon.

“There have been cases, you could say isolated, but all outrageous,” Mexican undersecretary of health Hugo López-Gatell said Monday night. “Fear produces irrational reactions, reactions that make no sense, have no foundation and have no justification when they have to do with respecting the dignity and the physical integrity of people.”

It also comes as the Mexican government has embarked in a massive recruiting drive to bolster the thin ranks of its public health system before the virus hits with its full force.

“It's even more outrageous when it concerns the health professionals that we all depend on in this moment, because they are on the front lines facing this epidemic,” López-Gatell said. “The declaration is of indignation and a demand that this not occur because it is completely punishable, sanctionable and won't be allowed.”

Mexico has nearly 2,800 confirmed COVID-19 infections and 141 deaths. For most people, the new coronavirus causes mild or moderate symptoms, such as fever and cough that clear up in two to three weeks. For some, especially older adults and people with existing health problems, it can cause more severe illness, including pneumonia and death.

Authorities were moved to speak out publicly because the incidents have continued spreading. Harassment of medical personnel in the western city of Guadalajara became a daily occurrence in recent weeks.

In a letter to Gov. Enrique Alfaro, her organization asked for help and public condemnation of the attacks.

“We all know we are potentially at risk in public health, but violence can never be tolerated, even though we are afraid of catching coronavirus,” the letter said. “We have to maintain our mental health and share information so that they know nurses are not enemies of society.”

A group of cab drivers calling themselves “Code Red” in that city banded together to offer free or reduced cost rides to health workers.

But the attacks haven't been limited to that city.

A nurse in the city of Merida, Yucatan wrote on Facebook of a recent attack.

“While I was waiting for my ride, two people on a motorcycle threw an egg at my uniform," wrote Rafael Ramírez, who works at a public health clinic in Merida. “I didn't think these kinds of things happened in our city. I felt powerless not being able to do anything while they rode on laughing.”

In the central state of Morelos late last month, residents of the rural community of Axochiapan protested outside their local hospital, which they heard might be used to treat coronavirus patients. When the hospital director came out to say nothing had been decided yet, a man shouted that they would burn the hospital down.

The hospital attacked this week in Sabinas Hidalgo, Nuevo Leon had been turned over to the military to receive COVID-19 patients.

“To threaten the physical safety of medical personnel or to affect the functioning and operation of the hospital infrastructure dedicated in this moment to the health emergency puts at risk the capacity of response that the population requires,”said Víctor Hugo Borja, director of medical services for Mexico's public health system.

Mexico is not the only place seeing such harassment of medical personnel.

In Argentina, each night residents go out to their balconies or windows to applaud those working in the health system. But in one incident, a group of residents in an apartment building advised a doctor living there that she not be in the building's common spaces or risk legal consequences. They told her to “not touch door handles, stairway railings and to not be on the terrace.”

In another case, a pharmacist found a sign on his building's elevator telling him he should leave the building to not spread the virus to his neighbors. He reported it to authorities.

Victoria Donda, head of Argentina's National Institute Against Discrimination, Xenophobia and Racism, said doctors and nurses were among an “enormous quantity of cases of discrimination” they are receiving related to the pandemic.

“We can't applaud at 9 at night and discriminate at 9 in the morning,” she said. “We have to inform ourselves well so that the emotions that burst forth are not irrational in this emergency and we don't let fear overtake us.”