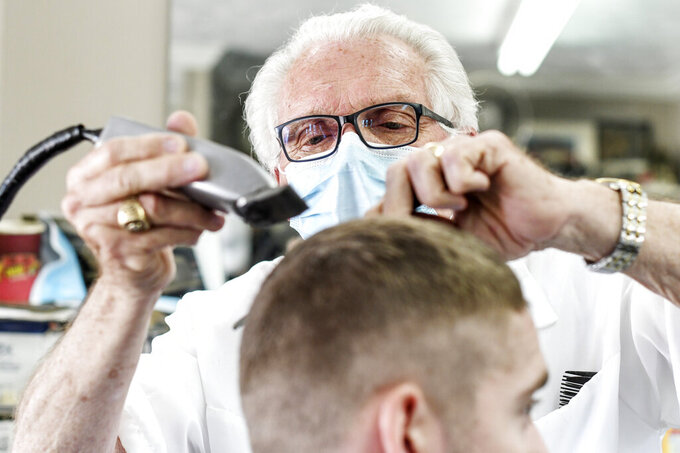 LANSING, Mich. (AP) — A Michigan barber who defied Gov. Gretchen Whitmer and reopened his shop last spring during the coronavirus pandemic was fined $9,000 for violating licensing rules, including joining a protest where hairstylists cut hair on the Capitol lawn.

Karl Manke will appeal the penalties in court, his lawyer said.

The Board of Barber Examiners on Monday accepted an administrative law judge's findings and issued the fines for violations — including barbering on the Capitol steps, where he was not licensed to operate. He also allowed used neck strips and piles of hair to accumulate on the floor in his Owosso barbershop and stored a comb in his shirt pocket instead of a covered container, according to the board, whose membership consists primarily of barbers.

The fines were levied against both Manke and his business, and $6,000 stemmed from his participation in the Capitol demonstration last May.

“It shows their pettiness, it shows their vindictiveness. The lack of proportionality here is almost breathtaking really,” said David Kallman, Manke's attorney.

Manke contends he had a right to free speech. In a March 1 report, Administrative Law Judge Stephen Goldstein said his argument “may have merit," but the tribunal had no jurisdiction to address constitutional issues.

“Respondent had the option of protesting without cutting hair,” Goldstein wrote. “He chose a different path and in so doing has violated the Code.”

Kallman expressed confidence that his client will prevail because the occupational code “ignores the First Amendment right and his right to free speech. The constitution overrules any restriction like that.”

In February, a judge dismissed disorderly conduct charges against six hairstylists who were ticketed during the protest after the women noted the state Supreme Court later ruled many of the Democratic governor's orders were issued under an unconstitutional law. The hairstylists still face administrative action related to their licenses.

The story has been corrected to indicate that the quote in the fifth paragraph is from Manke’s attorney, not Manke.