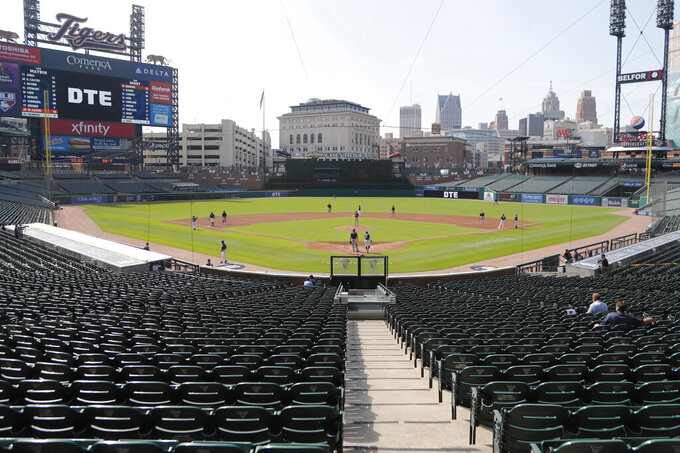 FILE - In this Friday, July 10, 2020, file photo, the Detroit Tigers play an intrasquad baseball game, in Detroit. Michigan appears poised to amend a 1,000-patron limit so more Detroit Tigers fans can attend home games on Opening Day and after. Gov. Gretchen Whitmer's office said Monday, March 15, 2021, the state health department has had talks with the team "to find a safe path forward to expand capacity limits at the stadium." (AP Photo/Carlos Osorio, File)

Gov. Gretchen Whitmer's office said Monday that the state health department has had talks with the team “to find a safe path forward to expand capacity limits at the stadium. ... There’s nothing more exciting than fans rooting for the Tigers at a home game, and we look forward to making that happen very soon.”

In a statement, the team said it will announce details on increased ticket availability “in coming days.” It said it has been coordinating with the health department, public health and medical experts, Major League Baseball and others on a plan to let fans “confidently and safely return to the ballpark.”

A state pandemic order designed to curb COVID-19, amended Feb. 4 after a two-month drop in cases, says outdoor entertainment and recreational facilities can have no more than 1,000 customers gathered — up from a 500-person restriction. Critics, including Republicans, said that is too low since Comerica Park holds more than 41,000.

The state GOP and some Republican lawmakers gathered near the stadium Monday to urge the Democratic governor to boost capacity, noting 2,000 fans can attend spring training at the Tigers' 8,500-seat facility in Florida. Rep. Matt Maddock of Milford suggested Comerica Park's capacity limit should rise to 50% to start.

“Gov. Whitmer, for God's sake, just let us have some fun for once,” he said.

Whitmer spokesman Bobby Leddy declined to elaborate on the discussions with owner Chris Ilitch. But he cited expanded COVID-19 vaccine eligibility and the success of the state's tighter coronavirus restrictions — ordered in November — as evidence that Michigan “is making tremendous strides to get back to normal as quickly as possible.”

The state's seven-day average of daily new cases has risen over the past two weeks, to 2,002 from 1,326, according to Johns Hopkins University. It was over 7,000 more than three months ago.

Michigan Democratic Party Chairwoman Lavora Barnes accused the state GOP of being more concerned with how many people can go to a Tigers game than it is about the continued impact of COVID-19, noting Republican legislators have not fully allocated federal relief funding.

Also Monday, the state formally announced a 16-member workgroup of government, business and union leaders that will make recommendations on reopening offices for in-person work. Emergency rules, which prohibit such work if employees’ activities can “feasibly” be completed remotely, will be extended before they expire in mid-April.

They could be revised before or after that point.

Sean Egan, the state’s director of COVID-19 workplace safety, said the group will give recommendations to the governor on an ongoing basis given “tight timelines.” One possibility is a potentially clearer definition of the feasibility of working from home, he said.

“I think what employers really need to focus on is how they're going to manage vaccinations. I'm trying to picture how we manage workplaces that have only 40, 50, 60% vaccination rates or lower in the mitigation strategies because that we know that vaccination is our ticket out of the pandemic,” Egan said.

As of Sunday, 23% of people age 16 and up in Michigan had gotten at least one vaccine dose. The state will expand eligibility to those age 16 to 64 with disabilities or certain medical conditions on March 22, with the entire 16-plus population following on April 5.