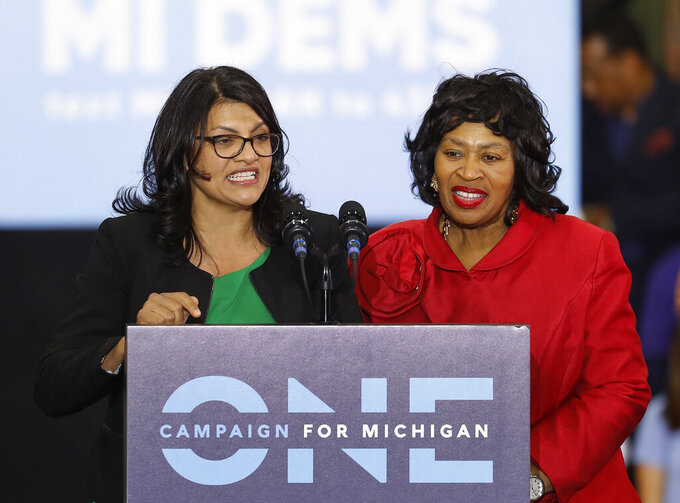 FILE - In an Oct. 26, 2018, file photo, Rashida Tlaib, left, then-Democratic candidate for the Michigan's 13th Congressional District, and Brenda Jones speak during a rally in Detroit. Tlaib's approach to governing as an unapologetic fighter, taking aim at the status quo alongside three other first-term congresswomen of color who make up the "squad" has made her a target of the GOP and her own party. Now the Michigan Democrat is the squad's most vulnerable member, as she faces Detroit City Council President Brenda Jones in the Aug. 4 primary. (AP Photo/Paul Sancya, File)

LANSING, Mich. (AP) — Michigan’s primary Tuesday featured a serious challenge to an incumbent congresswoman and campaigns for two U.S. House seats where a Republican and a former GOP member are retiring.

The election — marked by a surge of mail-in absentee ballots that led to delayed results during the coronavirus pandemic — also shaped races in November for a couple of potentially competitive congressional districts Democrats flipped in the 2018 midterm.

Democratic Rep. Rashida Tlaib, part of a “squad” of first-term liberal women of color, narrowly topped a crowded 2018 primary field to win the 13th District, which includes parts of heavily Democratic Detroit. She was leading a rematch with her closest challenger then, City Council president Brenda Jones, who finished the term of John Conyers.

Tlaib had a huge financial advantage over Jones. But race and religion were also factors. More than half of the district’s residents are Black, like Jones. Tlaib, of Palestinian descent, is one of the first two female Muslim members of Congress.

The decisions by Reps. Justin Amash and Paul Mitchell to not seek re-election led many Republicans to run in the 3rd and 10th districts.

Amash, who has criticized President Donald Trump and supported his impeachment, left the GOP last year. The Republican-leaning seat he has held since 2011 stretches between the Grand Rapids and Battle Creek areas.

Iraq War veteran Peter Meijer, whose grandfather helped build the Meijer chain of stores, easily won the five-way GOP primary and will face Democrat Hillary Scholten, a lawyer who ran unopposed and worked for the Justice Department during the Obama presidency. Meijer, 32, gave his campaign nearly $500,000.

Democrats are trying to flip the district this fall along with 17-term moderate Republican Rep. Fred Upton’s adjacent 6th District in southwestern Michigan, where liberal state Rep. Jon Hoadley outraised teacher Jen Richardson 18-to-1 but was surprisingly trailing with nearly all precincts reporting.

In the 10th District, three GOP candidates hoped to succeed Mitchell, who is leaving after two terms in the safe Republican seat that covers the Thumb region and much of Macomb County.

Business executive Lisa McClain spent more than $1.4 million of her own money — more than $900,000 above the amounts raised by state Rep. Shane Hernandez and retired Brig. Gen. Doug Slocum, who led the Selfridge Air National Guard Base. All support President Trump.

McClain was leading with 80% of precincts reporting.

In 2018, Democrats Elissa Slotkin and Haley Stevens flipped GOP-held seats and seem positioned to hold them amid Republicans’ candidate recruiting difficulties and Trump’s struggles in the suburbs around Detroit.

In Slotkin’s 8th District, which stretches from Lansing to northern Oakland County, newcomer Paul Junge, who was an immigration official in the Trump administration, was leading a four-candidate contest and declared victory. The Associated Press had not called the race early Wednesday morning. Junge gave his campaign $528,000. That is four times what the other three first-time candidates raised combined.

The 11th District in parts of Oakland and Wayne counties had a five-way GOP primary to see who goes against Stevens. The best-known candidate was former Rep. Kerry Bentivolio. He won the seat in 2012 when the incumbent submitted invalid nominating petitions, only to lose it two years later.

Eric Esshaki, a business attorney and former nurse, was leading with fewer than half of the precincts reporting.

Before the battle for control of the state House intensifies this fall — the GOP has a 58-51 edge — Republicans and Democrats had to settle primary fights. The parties’ chances in swing districts can hinge on whether strong candidates advance. Also, for many open seats, the next lawmaker was essentially chosen Tuesday because of how districts are drawn.

Absentee voting surged during the virus outbreak. As of 6:30 p.m. Tuesday, nearly 1.6 million absentee ballots had been cast — breaking the record of nearly 1.3 million set in the November 2016 presidential election and also surpassing the nearly 900,000 cast in the March presidential primary.

Secretary of State Jocelyn Benson called the election a “success,” with no reports of anyone waiting in lines when polls closed.

“We are ready for November,” said Benson, who again urged the Legislature to allow clerks to start processing absentee ballots before Election Day. She said the number of absentee ballots could double in the fall.