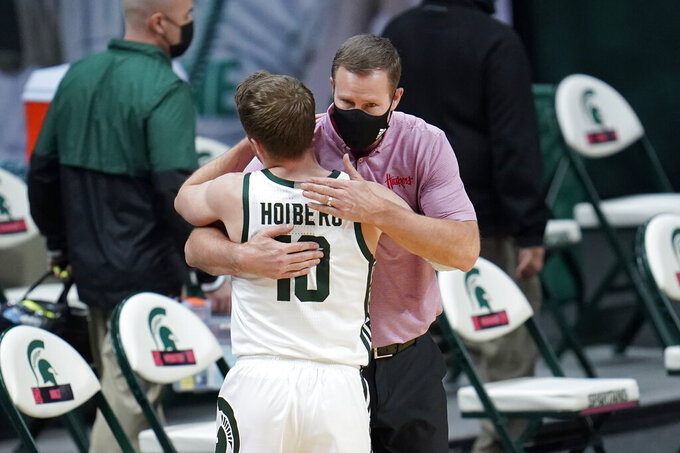 The Spartans (9-7, 3-7 Big Ten) ended a four-game losing streak, their longest since 2017. The skid led to the program's worst nine-game conference record since the 1969-70 season.

“We got a win so we can take a deep breath," Langford said.

The Cornhuskers (4-9, 0-6) played for the first time in nearly a month, returning to competition after a COVID-19 outbreak. Nebraska coach Fred Hoiberg, who had a severe case, was one of the many people in the program who tested positive for the coronavirus.

“There’s some positives from the competitive standpoint," Hoiberg said. “I had no idea what to expect."

The Cornhuskers were competitive early in the game and led 15-14 midway through the first half.

Michigan State took control for good and led 34-22 at halftime. The Spartans were ahead by as much as 16 early in the second half, overcoming 22 turnovers and Joey Hauser fouling out without a point.

“He’s in foul trouble all the time and some of that is his fault," Michigan State coach Tom Izzo said.

Nebraska's Trey McGowens had 13 points and Lat Mayen scored 10 points. Teddy Allen was held to three points and made 1 of 10 shots. The West Virginia transfer entering the game averaging 18-plus points.

Michigan State junior forward Thomas Kithier left the game midway through the first half because he was not feeling well. He didn't return to the game and was put in isolation at a nearby hotel, following COVID-19 protocols.

“It will be another 17 days for him if he tests positive,” Izzo said. “If he’s got a sore stomach, he’s back Sunday."

Kithier tested negative for the coronavirus Saturday morning. The Spartans had two games postponed last month because of an outbreak.

Nebraska was 11 of 24 at the line, missing opportunities to have a shot to win its first Big Ten game of the season.

“If we make half of those (missed) free throws, we’re right there and the outcome could’ve been different,” Hoiberg said. “But, I’m proud of them for competing.”

Michigan State junior forward Gabe Brown returned from a three-game absence after testing positive for COVID-19. He had six points and seven rebounds in 18 minutes.

“I did have a headache and I did lose my taste and smell, but I did get everything back," Brown said.

The Spartans were home for the first time since Jan. 8, but there were no fans in the stands due to the school's enhanced-physical-distance directive. Previously, players and coaches had some family members attend games at the Breslin Center.

Nebraska: The rusty team had a respectable showing after an outbreak paused activities Jan. 11.

“You never feel good after a loss like this, but there were some positives we can build on in the second half," Hoiberg said.

The Cornhuskers will have plenty of chances to compete the rest of the season and could end up playing 15 times in 32 or 33 days.

Michigan State: A desperately needed win was earned, but the team needs to win many more games to extend its NCAA Tournament streak that started in 1998.

“There is a little pressure on us and I kind of like that," Izzo said.

Turnovers continue to be the Spartans' No. 1 problem with a slew of giveaways against Nebraska preventing the Spartans from pulling away.

“I was not happy with the 22 turnovers," Izzo said. “But, I’m going to keep telling you that you have no idea what these kids are going through."

Michigan State: Hosts Penn State on Tuesday night and No. 8 Iowa on Saturday afternoon, giving the team an opportunity to earn a much-needed win over a ranked opponent.