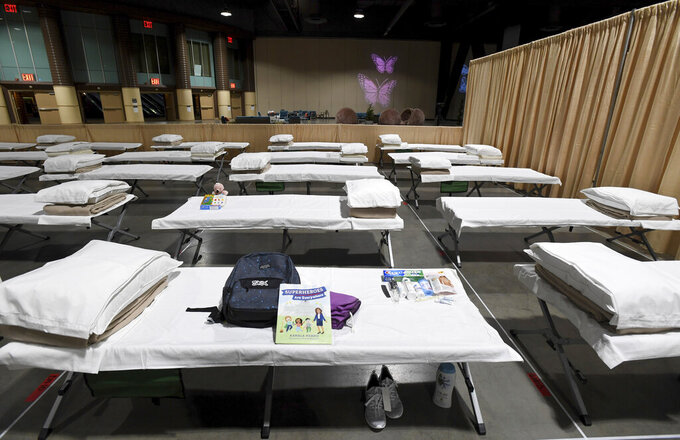 A U.S. Department of Health and Human Services spokesman, Mark Weber, said the department's staff and contractors are working hard to keep children in their custody safe and healthy.

In a recent news release, the administration touted its “restoration of a child centered focus for unaccompanied children,” and it has been sharing daily totals of the number of children in government custody as well as a few photos of the facilities. This reflects a higher level of transparency than the Trump administration. In addition, the amount of time children spend, on average, inside the system has dropped from four months last fall to less than a month this spring, according to the Department of Health and Human Services.

Nonetheless, the agency has received reports of abuse that resulted in a handful of contract staffers being dismissed from working at the emergency sites this year, according to an official who wasn't authorized to discuss the matter publicly and spoke on the condition of anonymity.

José, a father who fled El Salvador after his village was targeted in a massacre, requested asylum in the U.S. four years ago. He had hoped to welcome his wife and 8-year-old daughter to Southern California this year, but the pair were turned around at the border in March and expelled to Mexico. The little girl crossed again by herself and was placed in the government shelter in Brownsville, Texas, on April 6. José called a government hotline set up for parents seeking their migrant children repeatedly but said no one would tell him where she was.

For nearly three weeks, his daughter was held inside the Brownsville facility before finally being released to him in late April after an advocacy organization intervened to get the government to foot the bill for her airfare, as is required by the agency.

HHS declined to say whether there are any legally enforceable standards for caring for children housed at the emergency sites or how they are being monitored. The Biden administration has allowed very limited access to news media once children are brought into facilities, citing the coronavirus pandemic and privacy restrictions.

“HHS has worked as swiftly as possible to increase bed capacity and to ensure potential sponsors can provide a safe home while the child goes through their immigration proceedings,” HHS spokesman Weber said in a statement. “As soon as wrap around services — on-site primary care, including childhood immunizations and physicals, case management, phone calls to family members, education, recreation etc — become available as a result of additional infrastructure and staff, they are provided as part of the operation.”

Weber confirmed a number of specific shelter populations from the data the AP obtained.

Cohen described parents receiving calls from people refusing to identify themselves. They are told to be at an airport or bus station in the next two hours to pick up their children, who have been held for more than a month without notice, or they wouldn’t be released. Some parents are told to pay a travel agency thousands of dollars to have their child sent to them, she said.

“The children are coming out sick, with COVID, infested with lice, and it will not surprise me to see children dying as a consequence, as we saw during the Trump years,” Cohen said. “The Biden administration is feverishly putting up these pop-up detention facilities, many of which have no experience working with children.”

That emergency order still applies to adults, but the Biden administration has begun allowing children traveling without their parents to stay and seek asylum if they enter the country. As a result, some parents are sending their kids across the border by themselves.

Most already have a parent or other adult relative or family friend, known as a sponsor, in the U.S. waiting to receive them. But first they are typically detained by U.S. Customs and Border Protection, or CBP, then turned over to a government shelter.

“As much as having children spend days on end at CBP is unacceptable, so, too, is having children spend weeks on end in unlicensed Emergency Intake Sites,” said National Center for Youth Law attorney Neha Desai. “With every passing day, it is increasingly critical that these children are released to sponsors or transferred to licensed facilities.”

Over the course of 2019, the federal government held nearly 70,000 children in a system of contracted shelters, mass detention camps and foster parents. This year those numbers are expected to be even higher.

Some of the facilities holding children these days are run by contractors already facing lawsuits claiming that children were physically and sexually abused in their shelters under the Trump administration, while others are new companies with little or no experience working with migrant children. Collectively, the emergency facilities can accommodate nearly 18,000 children, according to data the agency provided earlier this month.

“There are a lot of questions about are there standards and who is ensuring that they are meeting them, and what kind of transparency and accountability will there be,” said Jennifer Podkul, a vice president at Kids in Need of Defense, which represents children in immigration court.

The Asylum Seeker Advocacy Project is one of several organizations that filed legal claims against the federal government seeking hundreds of millions of dollars in damages for parents who said their children were harmed while in government custody after being forcibly separated at the border under Trump administration policies. In some lawsuits, families claim children suffered physical and sexual abuse while in government custody, at both foster homes and private shelters.

“If those children were able to come in with their parents, they could be released with their parents and not placed in government custody,” said Conchita Cruz, co-executive director at the Asylum Seeker Advocacy Project. “This administration should lift the current policy in order for families to seek asylum together.”

Biden’s Justice Department is defending the government against these claims, which were filed in 2019 under the Trump administration. But the federal response has been mixed since the change in leadership. Some cases continue to be argued, while others are in settlement discussions.

In a recent filing in one case currently in litigation, federal attorneys agreed with the assertion that these policies indeed inflicted harm.

“President Biden has ‘condemned the human tragedy that occurred when our immigration laws were used to intentionally separate children from their parents or legal guardians ... including through the use of the “Zero Tolerance Policy” during the Trump administration,’” Justice Department attorneys wrote.

The judge in the case granted a joint request to pause the litigation until June 2 “while the parties explore settlement.”

“We want to make sure there is adequate oversight and transparency for these new structures and make sure that children can get out,” said Podkul, whose organization has been holding “know your rights” training with children in the emergency sites. “If kids are there for more than 48 hours, kids need to know what to expect.”

“She keeps asking me where her mom is, and I keep telling her not to worry, that she is in Mexico and she is OK,” he said. “Soon I hope she’ll tell me what it was like inside.”