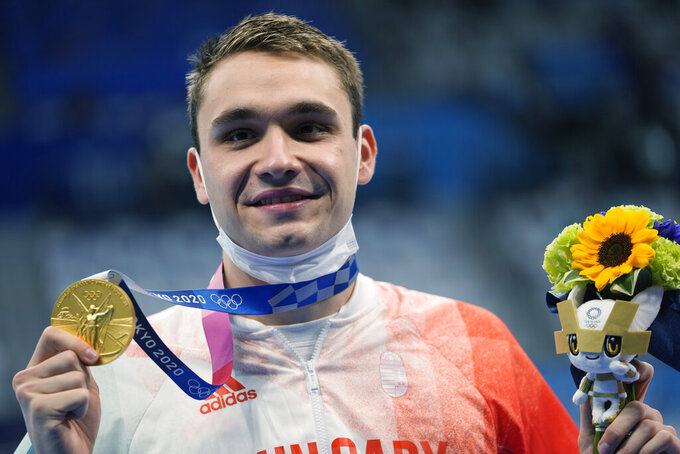 Japanese silver medalist Tomoru Honda said he had zero chance of beating Milak in the 200-meter butterfly final on Wednesday. Bronze medalist Federico Burdisso of Italy rated his own chances the same.

“I think it was impossible to win this race,” Burdisso said. “Because, you know, Milak is Milak.”

One thing did threaten to knock Milak off his stride, though: A tear in his swimming shorts.

Milak noticed the hole about 10 minutes before the race, he said, leading to a late change and a loss of focus. That little tear didn't stop him powering home to win gold by nearly two seconds. But it did spoil his chances of setting a new world record at his first Olympics, Milak said.

As if to underline his disgust, Milak produced the offending pair of swim shorts from a plastic bag, poked his finger through the tear, and then threw them down on a table.

"I have a routine, a rhythm," Milak said through a translator. “I am in focus but this situation broke my focus and that problem caused the time.”

The time was still a new Olympic record of 1 minute, 51.25 seconds. But with the gold medal effectively in the bag — no one disputes that — Milak's aim was to set a new world record at Tokyo Aquatics Centre and better his own mark of 1:50.73 from the world championships in 2019.

Milak is clearly the new dominant force in the fly having broken Michael Phelps' 10-year-old world record at the words. And at 21 years old, he'll have many more chances for more records.

As for the future of the swim shorts, Milak was asked if he'd thrown them away yet.