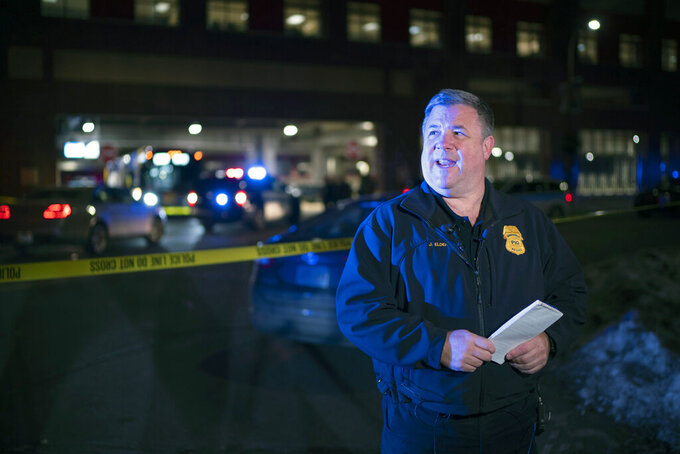 Minneapolis Police Public Information Officer John Elder briefs reporters on the shooting of two people on a bus, Feb. 6, 2020, in Minneapolis. The Minneapolis City Council voted Friday, July 24, 2020, to shift police media duties away from the Police Department to city communications staff, in what one of the proposal's authors called a small move designed to improve trust following the death of George Floyd. (Jeff Wheeler/Star Tribune via AP)

MINNEAPOLIS (AP) — The Minneapolis City Council voted Friday to shift police media duties from the Police Department to city staff in what one council member called a move to improve trust, amid calls for changes in policing after George Floyd's death.

The change was approved 9-3. Some council members wanted more time to consider the move, while journalists said they worried it could make it harder and take longer to get information.

The vote came as the city revised its budget to address a $156 million revenue dip due to the coronavirus pandemic. The shift in media duties won't affect the city's bottom line, but was seen as emblematic of a struggle over the future of policing in Minneapolis, where a majority of council members favor replacing the current department with a different kind of public safety agency. Overall, the City Council members redirected more than $1 million from a $193 million police budget Friday.

Council Member Steve Fletcher said the communications change is part of the larger process of examining whether functions currently handled by the Police Department could be done by someone else. Some council members also cited erroneous information given out by police after Floyd's death: In an initial statement, spokesman John Elder said Floyd “appeared to be suffering medical distress” after he resisted arrest and was handcuffed.

Cellphone video recorded by a bystander showed Floyd pleading for air as a white officer, Derek Chauvin, pressed his knee into the Black man’s neck for nearly eight minutes and people nearby urged officers to help him.

Elder has told The Associated Press that the initial description came after he was briefed by supervisors, and that he had not had time to review body camera video.

Lisa Goodman, a council member who voted against the change, said it “almost feels like it's retaliatory” against Elder, whom she said thought he was giving correct information.

“This is hardly transformational change,” she said, repeating a phrase used by council members who have said they want to significantly remake the department.

Suki Dardarian, managing editor at the Minneapolis Star Tribune, told one council member in an email that it's important to have city spokespeople who are trusted, credible, understand the subject matter and appreciate the need for transparency. When it comes to law enforcement, those spokespeople need to be accessible at all hours.

In an interview with the AP, Dardarian said she was concerned about revamping the city’s communication structure when so much is at stake, and fears the move will make transparency more difficult and decrease access to timely information. She said journalists work to track down information from multiple sources, including authorities, to get the truth.

“If we don’t have the information to begin with, it’s hard to really seek the truth,” she said.

The board for the Minnesota Chapter of the Society of Professional Journalists sent City Council members a letter discouraging the move, saying it was also concerned about access, and that placing the media position under city direction "would further erode public trust.”

Fletcher, who said there was a “pattern of inaccuracy” in information coming from the Police Department, said he was committed to ensuring access to reporters and was “convinced this is a move that can move us forward, rather than backward.”

When later asked to elaborate on other inaccuracies, Fletcher pointed to a June night in which multiple people were shot in a popular nightlife area. Police initially reported that one person died in that shooting, but later learned the fatality was from a separate shooting in another location, citing confusion when multiple shooting victims went to the same hospital.

Fletcher said rushing out information stoked fear in the community, and narratives that dramatize situations do the public a disservice.

Police Chief Medaria Arradondo, who opposed the change, released a statement saying the department has been lucky to have Elder help serve as the face and voice of the department, and the media position has helped the agency build relationships.

When previously asked to address the information about Floyd's death, Elder told the AP the Police Department realized its initial statement was inaccurate hours later when the bystander video surfaced. By then, state investigators took over and Elder said he didn't have authority to send out a correction.

“I will never lie to cover up the actions of somebody else,” Elder told the AP.