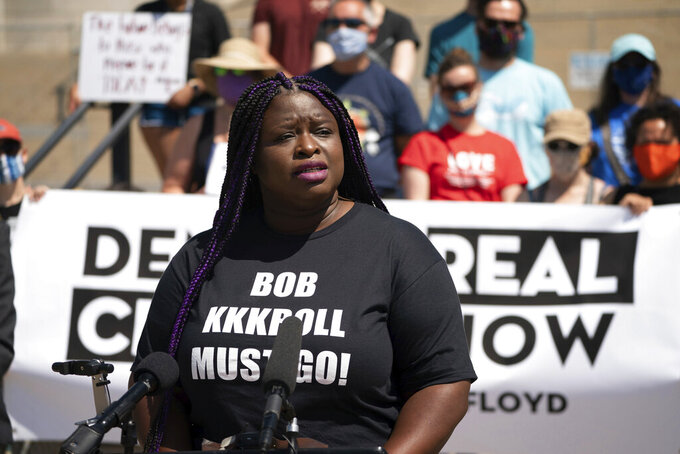 MINNEAPOLIS (AP) — Democrats who control the Minnesota House announced a $300 million economic aid proposal Monday for businesses that were damaged or destroyed during the civil unrest over the death of George Floyd.

The legislation is aimed at commercial corridors in lower income neighborhoods that were hardest hit as protests over Floyd's May 25 death while in Minneapolis police custody turned violent. Many of the affected small businesses along Lake Street and Broadway Avenue in Minneapolis, and University Avenue in St. Paul, are owned by people of color and immigrants.

State Rep. Hodan Hassan, a Minneapolis Democrat who represents part of the damaged area, said the community is still “in a lot of pain," and that buyers are already offering cash to people whose buildings were burned if they'll just go away.

Ibrahim Demaag, whose family owned Chicago Furniture Warehouse for nearly 27 years until they watched it burn down, said the family wants to rebuild but needs help.

“We don’t want to be segregated from anybody else,” he said. "We want to stay in our neighborhood. We want to build this neighborhood. We lost, we can come back as together. So all we need from you guys is your support, as much as we can, for anything that we need.”

The legislation includes a $125 million relief fund that's meant to get aid to small businesses in the next two to three weeks, with the rest of the money designated for longer-term recovery. It also includes sales and property tax breaks for rebuilding eligible properties, and measures that would prevent gentrification by ensuring that affected properties aren't sold off to the highest bidders for redevelopment. Democratic House Majority Leader Ryan Winkler, who is leading the push, told reporters that Democrats hope to pass the legislation this week.

The proposals face an uncertain fate in the Republican-controlled state Senate, where GOP leaders last week said that they intend to adjourn the special session this Friday no matter what happens in the House. Leading Democrats have urged Republicans to support the aid package.

Democratic Gov. Tim Walz called the special session mostly to comply with legal requirements for extending the emergency powers he has been using to respond to the COVID-19 pandemic, but he strongly endorsed an ambitious House Democratic slate of police accountability measures. The Senate GOP’s top special session priority, however, was an attempt to rescind his emergency powers, which the House blocked Friday.

House committees on Monday approved the Democratic-proposed policing measures, which are expected to go before the full chamber for votes late this week. The special session policing agenda of Senate Republicans is much more limited.

Senate Republican leaders said they would support some of the less controversial measures in the House package, such as a statewide ban on chokeholds and neck restraints, a duty for officers to intercede and report when they see another officer use excessive force, and to provide help for officers in recovering from stressful or traumatic events that could affect their future performance.

But those GOP leaders expressed opposition to many of the bigger changes sought by the House, such as putting the state attorney general’s office in charge of prosecuting all officer-involved killings. Senate Republicans have scheduled a hearing on their policing measures for Tuesday.

Also uncertain is whether the House and Senate can agree in time on a public construction borrowing package known as a bonding bill that's the main piece of unfinished legislation left over from the 2020 regular session, which ended last month. Senate Majority Leader Paul Gazelka said Friday that he'd be willing to consider increasing the size of the package from the $1.1 billion figure discussed earlier to $1.35 billion to provide money for rebuilding. But such a borrowing bill would require bipartisan support in both chambers to get the necessary three-fifths majorities needed to pass.

Minnesota is one of several states where Democratic lawmakers and governors are hoping to harness the anger over Floyd’s death to remake law enforcement. Legislatures have been slow to tackle those issues since a wave of police killings of young black men in 2014, including Michael Brown in Ferguson, Missouri.