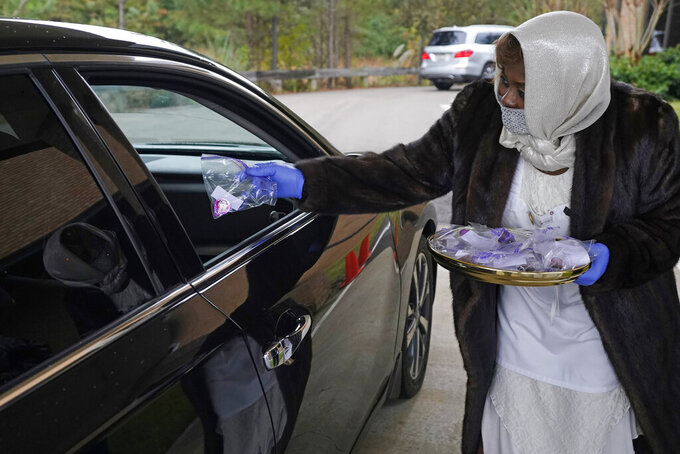 Usher Gloria Addison hands out a communion packet and radio frequency notice to a church member prior to the start of a First Sunday service at Anderson United Methodist Church, Dec. 6, 2020, in Jackson, Miss. The church has taken to using a variety of digital means by which to broadcast the majority of its church services to the members. However, for First Sunday services, the congregants gather in the church's parking lot to celebrate the receiving of communion in their personal vehicles. (AP Photo/Rogelio V. Solis) 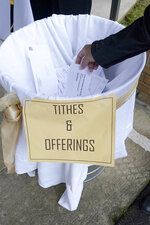 RIDGELAND, Miss. (AP) — It always feels special for Pastor Jay Richardson when his congregation at Highland Colony Baptist Church gathers during the holidays — but this year, that's even more true because of time they've spent apart.

The church temporarily shut down at the start of the pandemic, and again three months ago, when 25 worshipers became infected with coronavirus during an outbreak. Richardson, 70, was hospitalized with double pneumonia caused by the virus.

As hard as it was dealing with an outbreak, in many ways the isolation it caused has been worse, Richardson said.

“I’ve made the decision here that unless it’s a very, very unique situation, we’re not going to shut this church down anymore," Richardson said, explaining that not being able to worship together has hurt members emotionally and spiritually.

Mississippi is the center of the Bible Belt, where residents consider themselves the most religious in the entire country, according to Pew Research Center. At the same time, most of the state falls into the high-risk category for coronavirus because of a high rates of conditions like hypertension and diabetes.

Houses of worship have faced difficult decisions during the pandemic and those challenges have been exacerbated as new cases peak during Christmastime, with thousands of Americans dying from the virus every day.

"From a public health perspective, we don’t need to go to church,” Dobbs said during a virtual conversation about the approaching holiday.

Reeves has set limits on the number of people who can gather at one time — currently 10 people indoors and 50 outdoors, without social distancing — but those regulations have never applied to religious institutions.

The topic has been the subject of debate in the courts. In 5-4 vote last month, the conservative-led Supreme Court barred New York from enforcing certain limits on attendance at churches and synagogues in areas hit hard by the virus.

“God is bigger than government,” Reeves wrote on Facebook after the court's ruling. "The right to freely practice your faith must never be infringed.”

As Mississippi has seen a recent rapid increase in virus cases, both the Mississippi United Methodist Conference Pandemic Task Force and the Episcopal Diocese of Mississippi called for an end to in-person services.

“It breaks my heart to make this direction, especially now, during Advent,” the state's Episcopal bishop, the Rt. Rev. Brian R. Seage, wrote in a Dec. 3 letter.

But many have kept their routines. For now, Highland Colony — a majority-white church in a Jackson suburb — is still holding in-person services.

“God has built a certain rhythm into our lives as Christians, and part of that rhythm is meeting together on a real regular basis," Richardson said. "If you get to where you’re not doing that, your whole life gets out of rhythm.”

Richardson, who was hospitalized for five days, was the most severely ill member of the church during the outbreak at Highland Colony.

Church leaders believe the outbreak started at a singing group's rehearsal, then spread at a Sunday service.

Afterward, they canceled small group meetings and created more space for singers. They had already added a second Sunday service to limit crowds, spaced out seating and added sanitizing stations and temperature checks.

Joy Sartain, 89, was wearing a mask sitting in a section of seats roped off for vulnerable populations as she attended a recent Highland Colony service.

“I have trouble understanding why some people will go to a restaurant and eat, the grocery store or the mall to shop, but they are afraid to come to church? That doesn’t make sense to me," she said. “We can do this safely, and it's so important to us.”

Every church's approach has been informed by its experience with the virus.

At Anderson United Methodist, a predominantly African-American church in Jackson, the Rev. Joe May said he's seen the toll of COVID-19 firsthand. He said 10 members of his church have died during the pandemic.

Anderson has not returned to in-person worship, instead doing virtual services and daily prayer calls. Once a month, the church hosts a drive-in service that attracts around 400 people. Before the pandemic, up to 1,000 people attended.

May has noticed persistent anxiety among members about the virus, and that's something he's tried to respect. He said he thinks it's a reflection of how the pandemic has hit Black people especially hard.

“Now is a very dangerous time with numbers tripling and quadrupling. I think it is a very, very unsafe method,” he said of in-person worship. “It’s horribly bad in terms of people letting down their guard.”

Even while taking precautions, May said five members of the church's praise band had recently tested positive for COVID-19.

“A church is not just a building, a church is people,” he said. “We can still keep our people connected. You can worship God without having to congregate in a building."