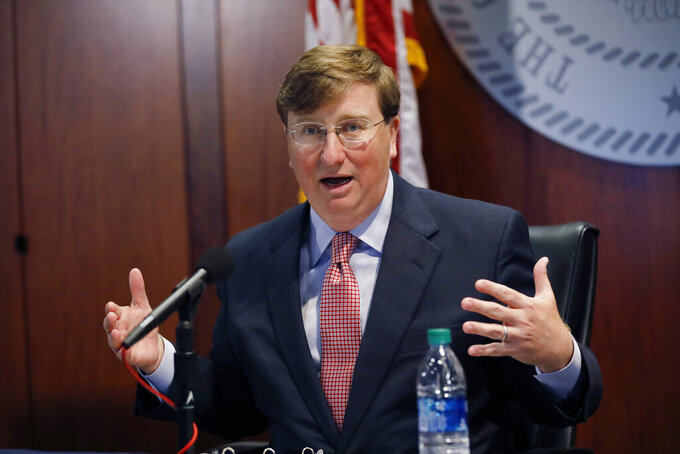 JACKSON, Miss. (AP) — Mississippi Gov. Tate Reeves said Monday that the state should phase out its individual income tax by 2030 to attract new residents and businesses that could boost economic growth.

“We, as a state, need to think big,” said Reeves, a Republican who became governor in January. “What can we do to make a splash? What can we to do to say to the world, ‘Not only do we want you to invest capital here, we want you to move here'?"

Mississippi's population has grown slowly this year after declining in recent years. Florida, Texas and Tennessee, which do not have an individual income tax, have grown rapidly.

“Let's eliminate the income tax, which is one huge speed bump to long-term economic growth and recovery for Mississippi," Reeves said.

Legislators often ignore budget ideas from any governor, and Reeves could face bigger challenges than usual because of uncertainty caused by the coronavirus pandemic.

The individual income tax is one of the largest sources of Mississippi tax collections.

During the fiscal year that ended June 30, the state collected about $5.8 billion from all types of state taxes, fees and other sources, including lawsuit settlements, according to the state Department of Finance and Administration. The biggest chunk of money, about $2.2 billion, came from sales taxes. The next-largest source was about $1.8 billion from individual income taxes.

The Mississippi Department of Revenue says the state does not charge individual income tax for the first $6,000 for a single person or the first $8,000 for the head of household — one person with at least one dependent. The exemption for a married couple is $12,000.

In 2016, Republican Gov. Phil Bryant signed a law that phases out the 3% individual income tax bracket, starting in calendar year 2018 and ending in 2022.

The proposed budget that Reeves released Monday also includes $3 million for grants to local schools for a “patriotic education” program and a $3 million increase for the state Law Enforcement Training Academy.

“We think one of the priorities in Mississippi is not to do what some would suggest, which is to defund the police,” Reeves said. “Rather, we want to have an initiative to actually fund the police.”

President Donald Trump on Nov. 2 created a “1776 Commission” to promote his vision of patriotic education. Trump had criticized The New York Times’ “1619 Project,” which examined the long-term consequences of slavery in the United States.