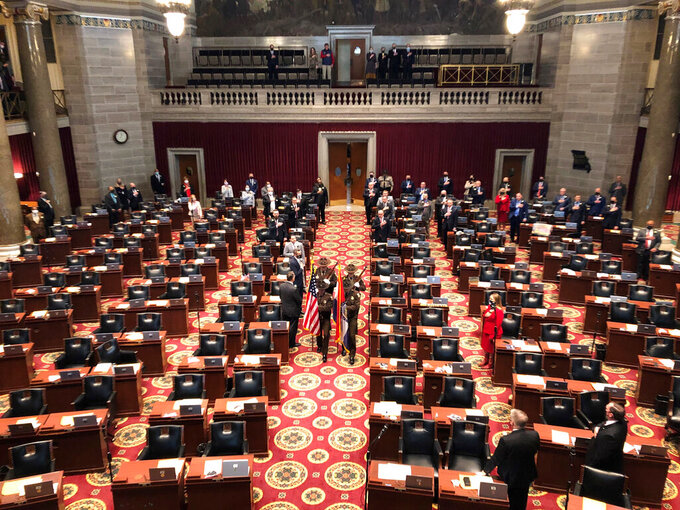 A Color Guard enters the Missouri House chamber to open the 2021 legislative session on Wednesday, Jan. 6, 2021, in Jefferson City, Missouri. Only the more senior incumbent lawmakers were present in order to try to reduce the number of guests in the galleries as a COVID-19 precaution. Newer lawmakers were later added to the floor, filling up the chamber. (AP Photo/David A. Lieb)

JEFFERSON CITY, Mo. (AP) — Missouri lawmakers on Wednesday began what's guaranteed to be an unusual legislative session as the state continues its battle with the coronavirus pandemic.

The usually packed House was noticeably empty when the chamber convened, with only the most veteran lawmakers present to take their oaths in order to reduce the number of guests in the galleries. The newer lawmakers were gradually added until the 163-member chamber was again full, with lawmakers packed closely at their desks. Democratic representatives wore masks, but most Republicans did not.

The smaller 34-member Senate convened in one group, with a similar partisan divide in mask-wearing.

Legislative leaders said precautions will be in place to avoid the spread of COVID-19 during the Republican-led Legislature's roughly five-month annual session, although rules primarily apply to staffers and not lawmakers.

House and Senate administrative staff must wear face masks, but that's optional for lawmakers. The Senate is limiting staff seating in committee rooms, and the House is allowing employees to work from home when practical.

Republican Senate President Pro Tem Dave Schatz, who himself tested positive for COVID-19 but has since recovered, said healthcare and other essential workers are on the frontlines daily. He said lawmakers are “going to have to do the same thing" and find a way to work safely.

“Maybe by the middle of summer we might have this thing a little bit further behind us," Schatz said. “But until then I plan on us moving forward and continuing business in the best way we can.”

When legislators last convened for a special session shortly after the Nov. 3 election, their work was delayed into December after several lawmakers and staff tested positive for COVID-19.

State Rep. Brenda Shields told The Associated Press she tested positive for COVID-19 on Nov. 12 after spending the previous days in Jefferson City. Shields said she regularly wore a mask and doesn't know how she contracted the virus.

At first, her symptoms appeared mild, like a head cold with fatigue. But two weeks later, Shields said she experienced “extreme heaviness” in her chest. Doctors said her lung capacity was less than 50% — as if she was a lifelong smoker, though she's never smoked — and that she also had developed heart issues from the virus. Shields said her recovery could take up to six months, and she hopes colleagues learn from her experience.

“Some people have COVID and it comes and goes and life continues on. You never know when you might be the person who ends up being the long-hauler,” said Shields, a Republican from St. Joseph. "So I encourage them to wear a mask and to take care of themselves.”

The Capitol is still open to the public. On days when the Legislature is in session, entrants will have their temperatures taken and be questioned about possible illness or exposure.

Public seating will be spaced out in House and Senate committee hearings for social distancing. The Senate also provides live audio streaming of its committee hearings and sessions, and the House livestreams video of its public meetings.

“As far as I have been told, it's going to be business as usual, which is obviously very unacceptable to me," she said.

Schatz and Republican House Speaker Rob Vescovo were both elected without opposition by their colleagues to the top leadership posts.

Lawmakers are expected to focus on pandemic-related policies in their work.

Both Schatz and Vescovo said a top goal is to pass a bill shielding businesses and health care workers from being sued for alleged misconduct related to the coronavirus pandemic.

Republican Gov. Mike Parson and the Missouri Chamber of Commerce and Industry, an influential business association, are both pushing lawmakers to pass the policy.

Parson had added passing the bill on lawsuits to lawmakers' to-do list during a special session on federal coronavirus aid last year. He later dropped his last-minute request, instead leaving it to lawmakers to address during their longer annual session this year.

Vescovo stressed the need to give schools the resources to stay open so that children can effectively learn. He also called for broader education reforms, recounting his own experience as a child adopted out of the foster care system who struggled and dropped out of school before eventually earning a GED.

He said the education system must be improved “so that it can help the kids who do not learn in conventional ways.”

Vescovo also voiced support for bills that that would “balance the need to protect the public health” with people's freedoms during the pandemic. Several lawmakers this year have proposed checks or limits on local officials' ability to close businesses, require masks or issue other health-related orders.

One bill would allow mayors or other local executives to shut down businesses, churches, schools and public gatherings for up to 15 days at a time. Any longer than that and shutdowns would need to be approved by the city or county governing board, state health department or the Legislature. Another proposal would exempt churches and places of worship from social-distancing requirements.

Schatz said he's not sure how successful those proposals will be.

The governor will outline his policy goals and budget recommendations during a State of the State speech Jan. 27.