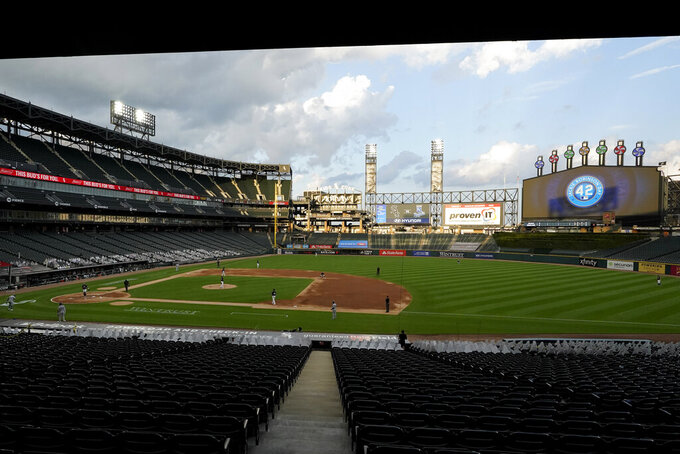 The Kansas City Royals play against the Chicago White Sox during the second inning of a baseball game in Chicago, Friday, Aug. 28, 2020. (AP Photo/Nam Y. Huh)

PHOENIX (AP) — Andrew McCutchen has relished these past few days in the Philadelphia Phillies clubhouse, having difficult, important conversations with baseball teammates about racial injustice.

As a Black man in a sport that's filled with mostly white and Hispanic players, he doesn't feel it's a burden to lead in the discussions. He's just glad that on Jackie Robinson Day, they're conversations that everyone is willing to have, even if the answers aren't always clear.

"What’s not OK is not caring what’s next.”

Major League Baseball observed a Jackie Robinson Day like no other Friday, with teams celebrating a man who broke the sport's color barrier with the Brooklyn Dodgers in 1947. More than 70 years later, the racial reckoning continued.

Eleven games were postponed this week as some teams joined other leagues like the NBA, WNBA and MLS in protesting social injustice.

The Oakland Athletics and Houston Astros took the field Friday night and then left after a moment of silence, draping a Black Lives Matter T-shirt across home plate as they chose not to play. They will play a doubleheader Saturday.

Teams across the league were celebrating the day in various ways. As usual, players, managers, coaches, umpires and other on-field personnel were wearing Robinson’s No. 42.

“I did find it almost crazy and kind of great, after everything that went down yesterday in baseball and in sports and with our organization as well, that we come right back here today and wear No. 42 and we go out there and celebrate Jackie Robinson and everything that he’s done for our game, and really, for the nation," Baldelli said.

Jackie Robinson Day is usually on April 15, but the celebration was moved to Aug. 28 this season to accommodate the COVID-19-altered schedule, which started in late July. The date was chosen because it is the anniversary of the March on Washington in 1963 and also the day in 1945 when Dodgers GM Branch Rickey met with Robinson to discuss breaking the color barrier.

In Boston, players from both teams lined up along the baselines before the game and the Red Sox played a clip of Robinson speaking in St. Augustine, Florida, in 1964. During a recording of the national anthem by Ruth Pointer, outfielder Jackie Bradley Jr. — the only Black player on the Red Sox — knelt as did Alex Verdugo next to him.

During the national anthem at Angel Stadium, Black players from the Angels and Mariners stood together in center field and linked arms with Los Angeles’ Mike Trout, Anthony Rendon and David Fletcher.

Also Friday, it was announced that actor Chadwick Boseman had died at 43 from colon cancer. Boseman played Robinson in the movie ‘42', which chronicled the ballplayer's life.

“I think (Robinson) would want us to talk about change," said Rockies outfielder Matt Kemp, who is Black. “Coming up in the Dodgers organization and the name Jackie Robinson, it just meant so much more. I wore the jersey that Jackie Robinson wore back in the day. To be around guys like Don Newcombe and Maury Wills, some of the legends that were with the Dodgers, you get to hear stories about things that people have never heard.”

Added Seattle's Dee Gordon: “I think (Robinson would) be happy today to know that we stood up."

According to a recently published study on diversity in baseball, only 7.5% of opening day rosters consisted of Black players, the lowest percentage in the game since the study began in 1991.

Yankees manager Aaron Boone broke down in tears during a media briefing and left the room when he was asked about his two Black adopted sons Friday. He returned a few minutes later, still shaken.

“I would just say, I know I’m talking to a lot of people out there, it’s a hard, heavy year, and a heartbreaking year in so many ways,” Boone said. “For my family, too. But I think that’s the case for a lot of people of all different backgrounds and races.

“My prayer is just that we can continue to, even though we’re going through some dark times, at the end of this, we’re better for it. That’s my continued prayer.”

Boone was emotional throughout the briefing, saying he had spent the previous hour talking to Yankees players about protests in recent days. New York was off Thursday and has not opted out of any games.

Pittsburgh Pirates first baseman Josh Bell, who is Black, was among the players who also donated their Friday salary to The Players Alliance.

“I feel like this past week, things have definitely escalated, people have talked and done what they can try to do to push that needle forward,” Bell said.

The decision by several teams not to play Wednesday and Thursday night were in response to the shooting by police of 29-year-old Jacob Blake, a Black man, in Wisconsin over the weekend. MLB let teams decide whether they would play or not. Some games were postponed while others went on.

Mets outfielder Dominic Smith, a 25-year-old Black man, hit the go-ahead home run in his first game since tearfully pleading for help combating racial inequality, helping his team beat the crosstown Yankees 6-4 in the opener of a doubleheader Friday.

Baseball's recent postponements came after the NBA’s Milwaukee Bucks didn’t come out on the floor for Game 5 of their first-round playoff series with the Orlando Magic on Wednesday. NBA games scheduled for Thursday and Friday were also postponed.