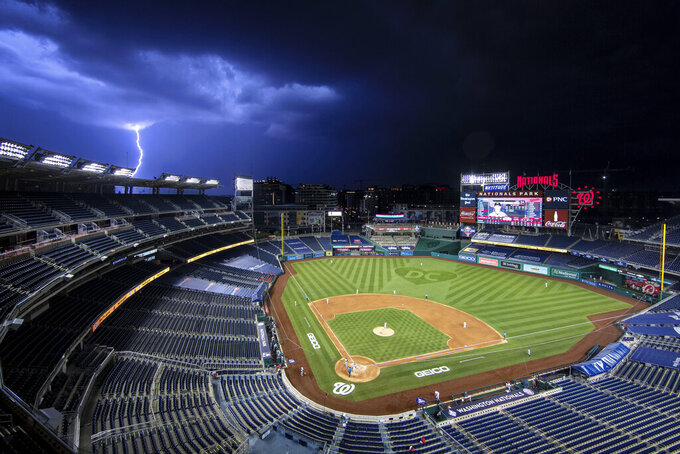 A bolt of lightning comes down from the clouds during the sixth inning of an opening day baseball game between the Washington Nationals and the New York Yankees at Nationals Park, Thursday, July 23, 2020, in Washington. (AP Photo/Alex Brandon)

NEW YORK (AP) — Major League Baseball and the players’ union agreed Thursday to expand the playoffs from 10 teams to 16 for the pandemic-delayed season, a decision that makes it likely teams with losing records will reach the postseason.

The agreement was reached hours before the season opener between the New York Yankees and World Series champion Washington Nationals. The deal applied only for 2020 and included a surprise benefiting the Yankees the most: Collection of baseball's luxury tax will be suspended this year, a person familiar with the details told The Associated Press, speaking on condition of anonymity because no announcement was made.

Sixteen of the 30 teams will advance to a best-of-three first round: the first- and second-place teams in every division and the next two clubs by winning percentage in each league. Those winners move on to the best-of-five Division Series, where the usual format resumes. The final four teams are in best-of-seven League Championship Series, and the pennant winners meet in the best-of-seven World Series.

“It’s such a unique season, why not try a little something different and make it as exciting as possible,” said Colorado shortstop Trevor Story, whose team has never won a World Series title. “I know it’s going to be such a sprint with the 60-game season; adding more playoff teams will just add to the fire and the excitement and the fandom around the game. Anything can happen in a 60-game season. I’m all for it.”

In each league, the division winners will be seeded 1-3, the second-place teams 4-6 and the teams with the next two-best records 7-8, which means up to four teams in one division could be in the postseason. The first round pairings will be 1 vs. 8, 2-7, 3-6 and 4-5.

“This season will be a sprint to a new format that will allow more fans to experience playoff baseball,” baseball Commissioner Rob Manfred said in a statement.

The higher seed in the first round will host all games from Sept. 29 to Oct. 2.

“For me personally, a little less than ideal that there’s not more weight given to the division winners,” Gerrit Cole said after winning his Yankees debut, 4-1 at Nationals Park in a game called in the sixth inning because of rain.

Tiebreaker games, which have produced famous home runs by Bobby Thomson and Bucky Dent, are eliminated. Ties would be broken by head-to-head record, followed by better record within a team's division and record in the last 20 games within the division. If still tied, the standard would be last 21 games within a division, then 22, etc.

Teams could finish the regular season with differing games played; regular-season postponements would be made up at the discretion of Manfred.

As part of the deal, MLB agreed to guarantee a postseason pool that would be $50 million: $20 million if the first round is played and $10 million for each additional round. The postseason pool usually comprises ticket money from the postseason, but baseball anticipates playing the entire year in empty ballparks due to the coronavirus.

“The opportunity to add playoff games in this already-abbreviated season makes sense for fans, the league and players," union head Tony Clark said in a statement. “We hope it will result in highly competitive pennant races as well as exciting additional playoff games to the benefit of the industry."

ESPN was given rights to seven of eight first-round series and TBS the other for no additional money as a makeup for missed games. ESPN and TBS were to have split the two wild-card games in the original format.

The change means 53% of the 30 teams reach the playoffs. If eight teams qualified for the playoffs in each league from 1995 through 2019, 46 teams at or below .500 would have made it, according to the Elias Sports Bureau, an average of just under two per season. Those teams included 25 from the AL.

There would have been only three seasons in which all playoff teams would have had winning records, Elias said: 2000, 2003 and 2009.

“From a selfish, White Sox standpoint, I’m certainly in favor of it just for the mere fact that it enhances the possibilities that this group’s going to get exposed to October baseball,” Chicago White Sox general manager Rick Hahn said. “We’ve talked over the years of this rebuild and into this next stage that learning how to win is part of that. And certainly learning how to win in October is very much part of getting us to our ultimate goals.”

MLB long restricted its postseason to just the pennant winners facing each other in the World Series. Postseason teams doubled to four with the split of each league into two divisions in 1969, then to eight with the realignment to three divisions and the addition of a wild card in 1995, a year later than planned due to a players’ strike. The postseason reached 10 with the addition of a second wild card and a wild-card round in 2012.

“There’s no question that by definition, it gives you more of a safety net,” Yankees manager Aaron Boone said. “I hope they they continue to put a premium on winning divisions.”

The new format created a minimum 14 additional postseason games and as many as 22 if each first-round series goes the distance. The plan was part of MLB's proposal to restart the season, but the union ended those talks June 22 and told MLB to unilaterally announce a schedule. That move preserved the union's right to file a grievance claiming MLB did not negotiate in good faith to play as long a regular season as economically feasible, subject to conditions set in a March 26 agreement between the feuding sides.

MLB renewed the proposal on Tuesday.

“It would be a great way to keep fan bases engaged throughout the entire season,” Milwaukee Brewers star Christian Yelich said. “You’d have a really tight race all the way down to the last day of the season. I think there’d be a lot of teams in it within a game or two of each other going into that final day.”