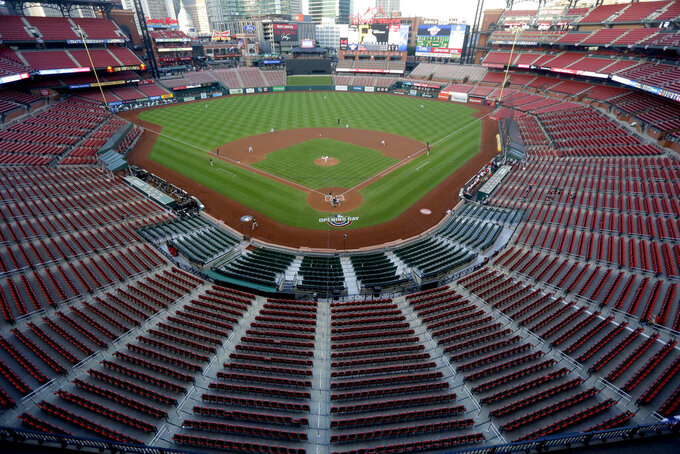 FILE - In this July 24, 2020, file photo, empty seats are viewed in Busch Stadium as St. Louis Cardinals starting pitcher Jack Flaherty throws in the first inning baseball game against the Pittsburgh Pirates in St. Louis. Major League Baseball players rejected a proposal to delay the start of spring training and the season due to the coronavirus pandemic, vowing Monday, Feb. 1, 2021, to report under the original schedule. (AP Photo/Jeff Roberson, File)

NEW YORK (AP) — Major League Baseball players, on-field staff and non-playing personnel who require access to them at ballparks must wear electronic tracing wristbands from the start of spring training and face discipline for violations.

Players will be encouraged to get vaccines but are not required to get them.

That was part of upgraded health protocols agreed to by Major League Baseball and the players’ association to deal with the novel coronavirus pandemic.

The 108-page operations manual, agreed to Monday night and obtained by The Associated Press, expands on the 101-page version used during the shortened 2020 season.

“Every covered Individual must wear a Kinexon contact tracing device at all times while in club facilities and during club directed travel and while engaged in team activities, including group workouts and practices,” the manual says. “Repeated failure to wear the devices or repeated failure to return the devices to the Kinexon device docking station may be a basis for discipline,” the manual says.

The manual states violations of the MLB or club codes of conduct or of spring training home quarantine “are subject to potential discipline, including but not limited to suspension or forfeiture of salary for days spent away from the club while in mandatory self-isolation or quarantine resulting from the violation.”

Player discipline would be subject to the just cause provisions of the collective bargaining agreement.

“Vaccination for COVID-19 will be voluntary for all players. However, MLB and the MLBPA will strongly encourage players to undergo vaccination at the appropriate time,” the manual states.

It adds “the parties, in consultation with their respective medical experts, will consider in good faith relaxing these protocols on a league-wide, team-wide and/or individual basis” ... (to) the extent it is safe and appropriate to do so" when sufficient players are immunized.

As part of the agreement, the sides extended last year’s experimental use of seven-inning doubleheaders and runners on second base at the start of extra innings.

Active rosters will return to 26 from opening day through Aug. 31 and 28 for the rest of the regular season, as originally intended for 2020, down from the 28 used throughout last season. Each team can travel with up to five taxi squad players for road games, and if all five are used one must be a player designated before the season as a catcher. The taxi squad players must return to the alternate training site after each trip.

A team experiencing a COVID-19 outbreak may expand its active roster without the added players having to be optioned, sent outright to the minors or placed on waivers when impacted players return.

MLB and the players' association combined to spend about $35 million on COVID-19 testing and rules last year. There were 45 games postponed for COVID-19-related reasons but just two were not made up, between St. Louis and Detroit.

There were COVID-19 positives for 58 consecutive days before Los Angeles Dodgers third baseman Justin Turner learned of his positive test and was pulled after seven innings of the sixth and final game of the World Series. Turner caused a controversy when he left an isolation room and returned to the field for a postgame celebration. He later apologized.

Players will undergo PCR testing for a second straight season, mostly by saliva samples but with a provision allowing nasal swabs. Blood samples will be occasionally collected for serology or rapid antibody testing. PCR testing will take place at least every other day starting in spring training and continue as long as a player's team advances until the postseason ends. There will be daily temperature and symptom screening.

Players and of-field staff will again be required to wear masks at ballparks, except for players in games, and pitchers and catchers warming up in bullpens.

Spring training starts Feb. 17 in Florida and Arizona, and the sides agreed intake screening can start three days before a player's voluntary report date. A player must undergo a five-day at-home quarantine before reporting, with exceptions for essential activities and approved outdoor workouts and exercise.

Players, on-field staff and non-playing personnel who require access to them may not during spring training, the season or the postseason go to indoor restaurants, bars, fitness centers, casinos, bowling alleys, pool halls, dance clubs or any indoor gathering of 10 or more people.

In addition, during spring training they must quarantine at home except for baseball activities with their teams and travel, medical care, grocery shopping, takeout food pickup, outdoor physical activity and — with permission of a joint management-committee — outdoor dining. Other low-risk outdoor activities are permitted during the season.

Unless advance permission is given by the team compliance officer, anyone covered by the plan may not meet during road trips with anyone outside the traveling party, other than for outdoor meetings with family and household members.

Similar to last season, high-risk individuals may opt out of playing and those who opt out may change their minds and opt in.

Traveling parties will be encouraged to keep windows in hotel rooms and team buses open for ventilation.

During the regular season, a game of less than five innings stopped by rain will be suspended and continued.

Players complained last year that they could not view replays during games, A new provision states “players will have access to tablets under the Dugout iPad program that can be loaded with content before and after games, and will have access to in-game video in a format that cannot be used to steal the catcher’s signs.”

Spring training will be divided into three phases. Workouts will be limited to individuals and small groups through Feb. 20, larger groups and intrasquad games will be permitted from Feb. 21-26, and the exhibition season will start Feb. 27 or 28.

Games against non-major league teams, including colleges, are banned this year, and spring training games through March 13 may be shortened to five or seven innings if both managers agree; half-innings may be stopped before three outs if a pitcher has thrown at least 20 pitches; and pitchers may re-enter a game. The three-batter minimum rule that started last season will be enforced starting March 14. Any spring training game may end in a tie.

Players will be allowed to drive their own cars rather than take team buses to maximize distancing.