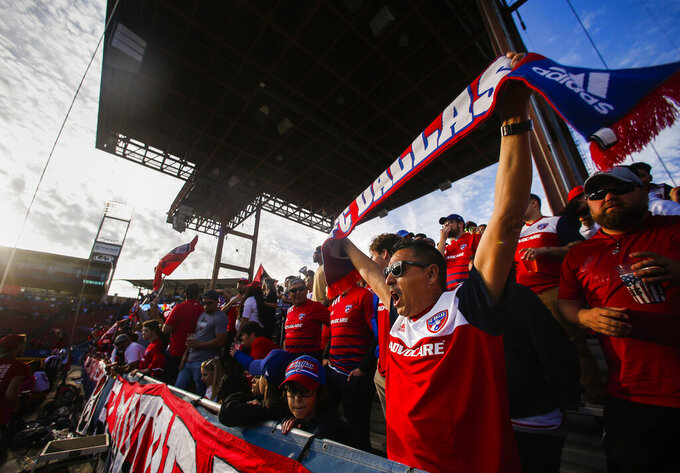 MLS was supposed to be celebrating its 25th year, but for now it remains a quiet milestone amid the coronavirus pandemic. Monday marks the anniversary of the league’s first game, when the San Jose Clash hosted D.C. United at Spartan Stadium before 31,000 fans.

The league has overcome crisis before, like in 2002 when the MLS contracted by two teams and its future was in doubt. But nothing quite like this.

“I think one of the saving graces that we have is that last year we shaved off a month of our season on the back end. And so now we have that back end to kind of help us. So I actually think that it’s feasible,” Vermes said. “I believe that we’ll get through this and have our season and all those things will come together.”

Teams were just two games into the season when play was suspended because of the new coronavirus.

The shutdown came at what otherwise would have been a high point.

Nashville and Miami joined the league this season, bringing the number of clubs to 26, with four more on the way in coming years. Inter Miami, David Beckham’s team, was preparing for its home opener when the delay took effect.

Multiple league sources told The Associated Press last week that the preference is to still play a 34-game season — with fans in attendance. However, that possibility grew dimmer with the U.S. government’s recommendation to extend social distancing guidelines to April 30.

Among the options available is returning to the league’s old calendar, which extended into December. The league shortened the season last year, in part by eliminating two-legged playoffs.

Another option is eliminating some non-league matches, like the expanded Leagues Cup competition with Liga MX teams.

Players are currently “in market” with their teams until at least April 24. The season is officially on hold until a target date of May 10, although that now appears unrealistic. One MLS player has tested positive for the virus, a Philadelphia Union player who had mild symptoms.

The league has had to weather storms before.

MLS lost $250 million in its first five years. While the league had expanded in 1998 to 12 teams with the addition of the Miami Fusion and the Chicago Fire, MLS was soon in trouble. It culminated in 2002 when the Fusion and the Tampa Bay Mutiny folded and the league contracted to 10 teams. Just three owners were left: Colorado billionaire Phil Anschutz owned six of the teams.

Current Commissioner Don Garber, who took the job in 1999, was instrumental in leading MLS back. The league made several significant changes but also had some luck: The U.S. men’s national team advanced to the quarterfinals of the 2002 World Cup in South Korea, creating renewed enthusiasm for the sport back home.

“In 2002, we started to implement that strategy. And it served as a very solid foundation for the next several years of growth. And the men’s national team went through the quarterfinals of the World Cup, and that helped really bring a lot of optimism about the future for soccer in the United States and the role that the league was playing because the players that scored the goals, Landon Donovan and Clint Mathis, were players that were playing in the league,” said MLS President Mark Abbott, who was the league’s first-ever employee.

By 2005, the league was expanding again, adding Real Salt Lake and Chivas USA. In 2007, Beckham joined the LA Galaxy, ushering in the era of the high-profile designated player.

On the day Inter Miami was supposed to host the Galaxy for its home opener, Beckham and his family went to the team’s temporary stadium in Fort Lauderdale, Florida. The Spice Girls’ “Spice Up Your Life” played on the stadium’s PA system — fitting since Beckham’s wife, Victoria, was part of the group.

The suspension has been especially tough on Nashville FC. In the week before their final game, a 1-0 loss at Portland, Tennessee was stuck by a series of tornadoes.

“Lots to process for all of us the past few weeks,” Nashville midfielder Dax McCarty said on social media. “For me, sport always unifies in difficult times but we are entering uncharted territory and the decision to postpone games is the right one. The health and safety of our communities comes first and always should. Stay safe friends.”

The league took steps to mitigate some losses by temporarily cutting the salaries of Garber, Abbott and Deputy Commissioner Gary Stevenson by 25%. Other front-office employees also will have their salaries cut, but no layoffs or furloughs were planned.

Giovanni Savarese, the current coach of the Timbers, who was among the league’s players that first season, praised MLS leadership for its handling of a difficult situation.

“The meetings and conversations that have gone on in the last few weeks, the ownership groups have been phenomenal in the way they have been reacting to try to make sure they are proactive, to make sure they expect every situation and put a plan in place,” Savarese said. “So the league is much different than what it used to be. If it would have been back in the day, going through this moment, it would be very difficult.”

Vermes, the league’s longest-tenured coach, who also was one of the inaugural players, believes MLS is well-positioned to retain its momentum.

“I do believe that our sport will, it will not only survive this, but I think it’ll grow and continue to flourish, because I think the things that have been put in place are things that are sustainable,” Vermes said.