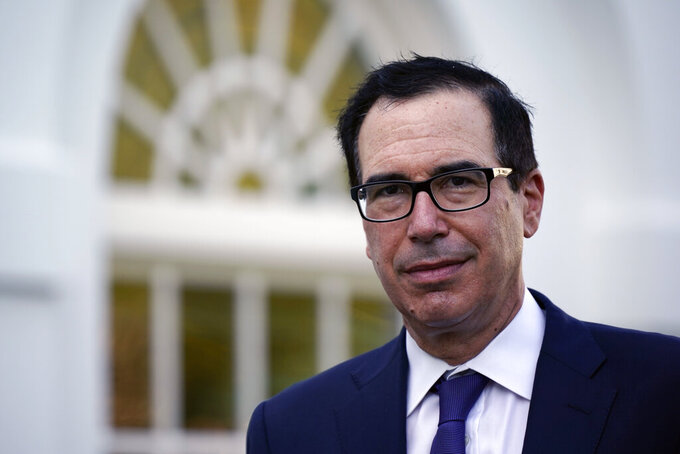 FILE - This Aug. 24, 2020 file photo shows Treasury Secretary Stephen Mnuchin at the White House in Washington. The U.S. is starting the 2021 budget year the way the old year ended, with soaring deficits. The Treasury Department reported Thursday, Nov. 12 that the federal government ran up a record October deficit of $284.1 billion, nearly double the red ink of a year ago. (AP Photo/J. Scott Applewhite, File)

WASHINGTON (AP) — Treasury Secretary Steven Mnuchin denied on Friday that he is attempting to limit President-elect Joe Biden's options for reviving the pandemic-damaged economy by ending several emergency loan programs being run by the Federal Reserve.

Mnuchin said the programs were not being heavily utilized and Congress can make better use of the money by re-allocating it toward small-business grants and extended unemployment assistance.

Mnuchin has argued that the decision will allow Congress to re-appropriate $455 billion to other coronavirus programs.

After initially objecting to the move, which will end the Fed’s corporate credit, municipal lending and Main Street Lending programs as of Dec. 31, the Fed softened its stance.

The Fed released a letter Friday from Chairman Jerome Powell in which he said the central bank would comply with Mnuchin’s request to close out the emergency loan programs and return the unused money appropriated by Congress to Treasury.

Powell said in his letter to Mnuchin that he is “pleased with all that we have accomplished together this year.”

Powell’s letter struck a more collegial tone than a one sentence statement the Fed issued Thursday. The central bank had said it would have preferred all the emergency facilities set up during the pandemic be maintained "to serve their import role as a backstop for our still-strained and vulnerable economy.”

In his Friday letter, however, Powell said he agreed with Mnuchin's contention that the Fed could access funds if needed from a separate Fed account to provide emergency loans.

But critics saw politics at play.

“There can be no doubt, the Trump administration and their congressional toadies are actively trying to tank the U.S economy,” Sen. Sherrod Brown, D-Ohio, said in a prepared statement Friday. “For months, they have refused to take the steps necessary to support workers, small businesses and restaurants. As the result, the only tool at our disposal has been these facilities.”

The U.S. Chamber of Commerce also criticized the move.

“A surprise termination of the Federal Reserve's emergency liquidity program, including the Main Street Lending Program, prematurely and unnecessarily ties the hands of the incoming administration and closes the door on important liquidity options for businesses at a time when they need them most,” said Neil Bradley, the chamber's executive vice president, in a prepared statement.

“There is an obvious right use for these hundreds of billions of dollars of already allocated but unused funds,” McConnell said in a statement.

The future of the Main Street and Municipal Lending programs has taken on greater importance with President-elect Joe Biden’s victory. Many progressive economists have argued that a Democratic-led Treasury could support the Fed taking on more risk and making more loans to small and mid-sized businesses and cash-strapped cities under these programs. That would provide at least one avenue for the Biden administration to provide stimulus without going through Congress.

Neither program has lived up to its potential so far, with the Municipal Lending program making just one loan, while the Main Street program has made loans totaling around $4 billion, to about 400 companies.