Montana bill would make it easier to decline vaccinations 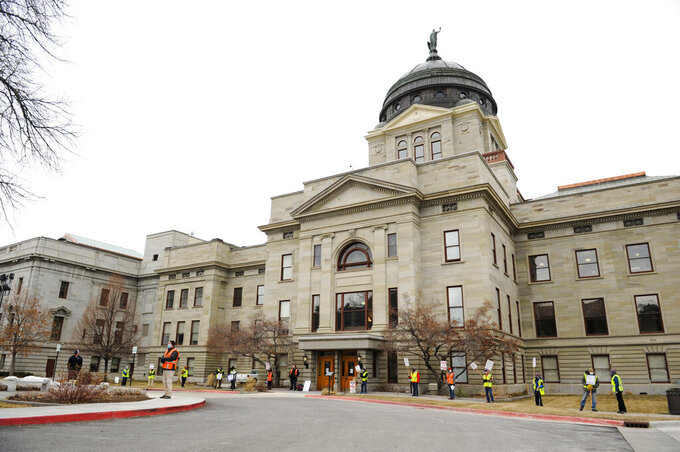 FILE - This Jan. 4, 2021 file photo shows the Montana State Capitol as demonstrators urge people to wear masks in Helena, Mont. The Montana House Judiciary Committee voted Tuesday, Feb. 23, 2021, to advance a bill that would ban discrimination based on vaccination status and prohibit the use of vaccination status to grant or deny services or access to businesses. (Thom Bridge/Independent Record via AP, File)

HELENA, Mont. (AP) — The Montana House Judiciary Committee voted Tuesday to advance a bill that would ban discrimination based on vaccination status and prohibit the use of vaccination status to grant or deny services or access to businesses.

Supporters of the bill told the committee it would protect the freedom and privacy of families to make their own medical choices, and expressed doubt over the medical safety of vaccines. Opponents, including several health care and child care organizations in the state, said mandatory vaccinations ensure the health of children and prevent outbreaks of diseases such as measles.

“By allowing children to come to school unvaccinated, we will see reemergence of serious infection,” said Dr. Marian Kummer, a retired pediatrician from Billings representing the Montana chapter of the American Academy of Pediatrics. In the previous school year, 4.5% of Montana kindergarteners had vaccine exemptions, Kummer said.

The bill's proponents said they worried such exemptions could disappear, and expressed concern that the coronavirus vaccines, which have been shown to be effective is reducing the spread of COVID-19, would eventually become mandatory.

“We are worried with the talk of vaccine passports, that people with deeply held religious beliefs that would preclude them from getting vaccinated will see those exemptions weakened over time and ultimately result in exemptions being done away with and people forced to get vaccines,” said Jeff Laszloffy, a lobbyist with the Montana Family Foundation, a conservative advocacy group.

Some countries have proposed the use of vaccine passports — or documents that would prove an individual’s vaccination status — to allow those inoculated against COVID-19 to travel internationally with more ease.

Vaccine passports have not been implemented in Montana or by the U.S. federal government.

The bill was advanced by the committee in a vote along party lines, with all 12 Republicans in favor and seven Democrats opposed. It heads next to a vote on the House floor.

The Republican-dominated Montana Legislature is considering other vaccine-related measures that would make it easier for parents and foster parents to decline to vaccinate their children.

Samuels is a corps member for the Associated Press/Report for America Statehouse News Initiative. Report for America is a nonprofit national service program that places journalists in newsrooms to report on undercovered issues.