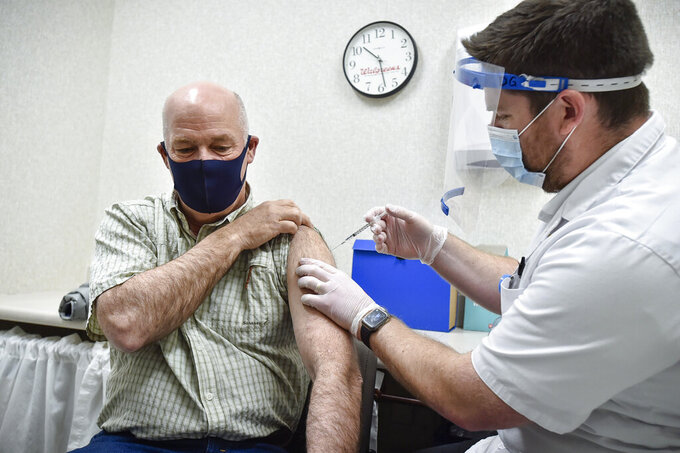 Gianforte's office disclosed Monday evening that he had been tested after experiencing unspecified symptoms a day earlier. First lady Susan Gianforte's positive test result came back Tuesday. She has not exhibited any symptoms, the governor's office said.

The governor notified all of his close contacts since his last public event on Thursday. Those contacts were with a staff member, a member of his security detail, family members, and friends with whom he had dinner, spokesperson Brooke Stroyke said.

Gianforte received his first dose of a COVID-19 vaccine Thursday and had been tested regularly since he was sworn into office in January. People aren't considered fully vaccinated until two weeks after receiving their second vaccine in the case of two-dose vaccines and two weeks after the vaccine in the case of one-dose vaccines, according to the U.S. Centers for Disease Control and Prevention.

The Gianfortes planned to isolate for 10 days on the advice of doctors and public health guidance. All of the governor's in-person events have been canceled. But he will “continue to conduct his duties and manage the state's business from his home in Bozeman," his office said in a statement.

Twenty-five members of the governor's staff were tested Tuesday and all received negative results, Stroyke said.

Since taking office in January, Gianforte has lifted a mask mandate imposed by his predecessor and eased other restrictions intended to curb the spread of the virus. He has touted personal responsibility and had kept a mask mandate in place for his own office.

After receiving his vaccine Thursday, he posted a social media statement saying the vaccine was “safe, effective and accessible to all Montanans 16 and older.”

He continues to encourage people to get the vaccine and take “commonsense precautions” to prevent the spread of the coronavirus, Stroyke said.

Montana has tallied over 105,000 positive tests for COVID-19 with at least 1,477 deaths. Montana has just under 1,000 active cases, including 262 in Gallatin County. Thirty-three people are hospitalized, according to state reports.

Montana has also administered 534,000 doses of vaccine, with just over 215,000 residents being fully immunized.