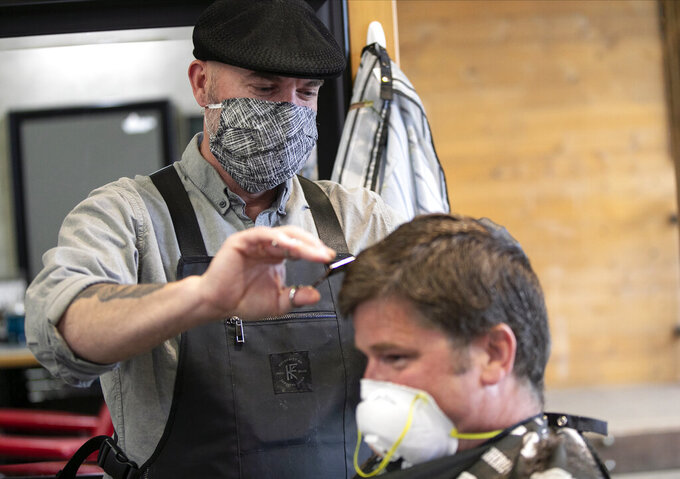 FILE - In this July 17, 2020, file photo, co-owner Bryan Kirkland cuts the hair of Mike Fallaw, a typical customer at The Barbershop & Shaving Parlor in Bozeman, Mont. Montana's statewide mask mandate has been lifted by Gov. Greg Gianforte. The Republican governor said Friday, Feb. 12, 2021 he made the decision because he thinks enough vulnerable Montana residents have been vaccinated against COVID-19. (Ryan Berry/Bozeman Daily Chronicle via AP, File)

HELENA, Mont. (AP) — Montana's statewide mask mandate that had been in place since July was lifted Friday by Gov. Greg Gianforte. But some cities and counties are keeping local mask requirements because they think the governor's move was premature.

Gianforte, a Republican, promised the day after assuming office in January that he would lift the state’s mask mandate once there were liability protections in place for businesses and health care providers, and once vulnerable Montana residents began receiving vaccines against COVID-19.

The governor said this week that both requirements had been met after he signed a law that would protect businesses from lawsuits by customers and employees related to contracting the virus.

The state’s chief medical officer resigned from his post Thursday, the day after Gianforte announced he would lift the mask mandate.

Dr. Gregory Holzman, who has been a key figure in the state’s response to the coronavirus pandemic, will continue to serve in the role until April 16. Holzman did not say in his letter of resignation whether the move was connected to the governor’s decision to lift the mask requirement.

Among those keeping local mask rules are: Lewis and Clark, Gallatin, Butte-Silver Bow and Missoula counties along with the city of Whitefish and several of Montana's Native American reservations.

The statewide mask mandate was put in place by Gianforte’s Democratic predecessor Steve Bullock in July, applying at first to counties with four or more active cases of COVID-19. It was expanded in November to cover the entire state, as the number of coronavirus cases and hospitalizations in the state surged.

The number of confirmed cases has since declined significantly, but some public health officials are saying the state is still far from vaccinating enough vulnerable individuals to safely lift the mask mandate.

Fewer than 47,000 people in the state had received both doses of the vaccine as of Friday, according to state figures.

The state’s public health department estimates 250,000 Montana residents are eligible for the vaccine under the second distribution phase, which includes those 70 or older, those with severe underlying health conditions, and people of color at a greater risk from contracting the virus. They join around 50,000 Montanans who were eligible under the state’s first vaccination phase, which included frontline health care workers.

“We’ve got thousands of Montanans who can’t get a vaccine and they’re vulnerable because they’re seniors or because they have underlying health conditions,” said Gallatin County Health Officer Matt Kelley, calling the governor’s decision “confusing and concerning.”

“I’d like everybody to have a chance at the vaccine before we take the mask mandate down,” Kelley said. “We’re not even close to that yet.”

Gianforte’s announcement came as the Centers for Disease Control reaffirmed the importance of wearing masks, saying earlier in the week that face coverings remain an important tool to combat the spread of the virus.

Even as he announced the mandate would be lifted, Gianforte said he would continue to wear a mask and urged others to do so. During the announcement of the change, he was accompanied by four Republican lawmakers, all wearing face coverings. However, the lawmakers, including Senate President Mark Blasdel and House Speaker Wylie Galt, are rarely seen wearing masks inside the state Capitol, where the Legislature has been in session for more than a month.

“To combat the virus, providing incentives and promoting personal responsibility are more effective than imposing impractical government mandates,” Gianforte said during the announcement.

Montana joins several states that have repealed their statewide mask requirement since the onside of the pandemic, including most recently Iowa, where the governor lifted the requirement last week despite advice to the contrary from the White House COVID-19 Response Team.

Without a cohesive statewide policy on masks, Kelley said there will be more pressure on business owners and government officials to ensure that public health regulations are being followed.

“The huge value of having a rule is it empowers businesses and government officials to put a sign on the door and let people know – ‘There’s a rule, and we’re following it. Please put a mask on,’” he said. “You take that away, you really leave business owners and other people out on an island having to make that decision on their own and defend it."