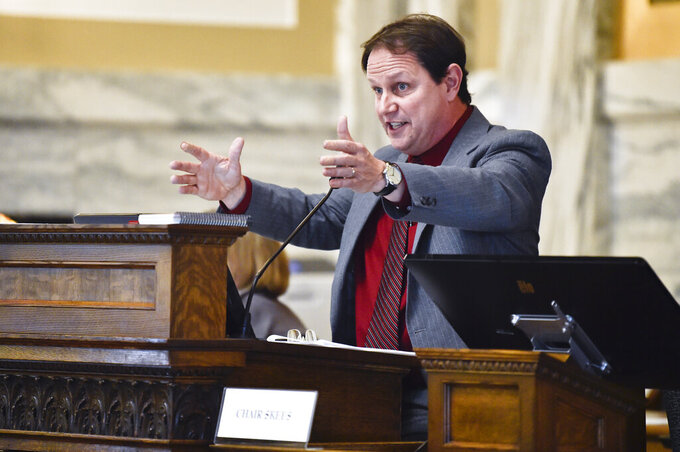 FILE - In this Dec. 7, 2020, file photo, state Rep. Derek Skees speaks during a meeting on the House floor of the Montana State Capitol, in Helena, Mont. Montana lawmakers have revived a controversial dress code that drew accusations of sexism when it was first introduced ahead of the 2015 legislative session before being tabled without ever taking effect. "We've been down this road before," said Rep. Skees, Republican chair of the rules committee. "When we went down this road it turned into an argument and a discussion that really had nothing to do with what we wanted." (Thom Bridge/Independent Record via AP, File)

HELENA, Mont. (AP) — Montana lawmakers have revived a dress code that drew accusations of sexism when it was first introduced ahead of the 2015 legislative session before being tabled without ever taking effect.

The dress code made a reappearance Thursday in response to a Republican lawmaker’s objection to a male Democrat’s decision not to wear a tie on the House floor, part of an unwritten expectation loosely enforced by lawmakers.

Lawmakers in the GOP-controlled Legislature were originally scheduled to discuss the dress code Friday afternoon, but the hearing was rescheduled for sometime next week.

“It is important, and I think we need to address it at some point, and I guess I got tired of waiting,” said Rep. Mark Noland, a Republican who brought the objection.

Republicans said Thursday they wanted to cement the tie-wearing expectation in House rules, but by making an issue of requiring ties for men they also brought back what some feel are sexist requirements for women.

The proposed code says women “should be sensitive to skirt lengths and necklines" while saying they can wear suits or dresses.

Democratic lawmakers expressed anger Thursday during a House Rules Committee meeting when Republican lawmakers first brought up the issue, pointing out that legislators should focus on addressing the impacts of the coronavirus pandemic on the state.

“It seems to me that this is a pretty big waste of time considering what is happening in this building,” said Minority Leader Kim Abbott.

Montana lawmakers drew national attention and plenty of mocking when the dress code came up in 2014.

Then-House member Jenny Eck, a Democrat, wrote in an email to then-House Speaker Austin Knudsen, a Republican, that the code “puts women under an extra level of scrutiny because of our gender.”

Knudsen later called the proposed dress code a “rookie mistake” and reversed course. “It wasn’t a hill worth dying on at the beginning of the session,” he said at the time.

Republicans instead offered a one-paragraph statement proposed by Eck, stating that House members should “dress in professional, business attire as is befitting the honor of the positions that we hold in office,” without reference to gender.

Republicans on Thursday acknowledged the rules had caused controversy in the past, but that they provided more clarity than the one-paragraph statement, which did not explicitly require ties be worn by male lawmakers.

“We’ve been down this road before,” said Rep. Derek Skees, Republican chair of the rules committee. “When we went down this road it turned into an argument and a discussion that really had nothing to do with what we wanted.”