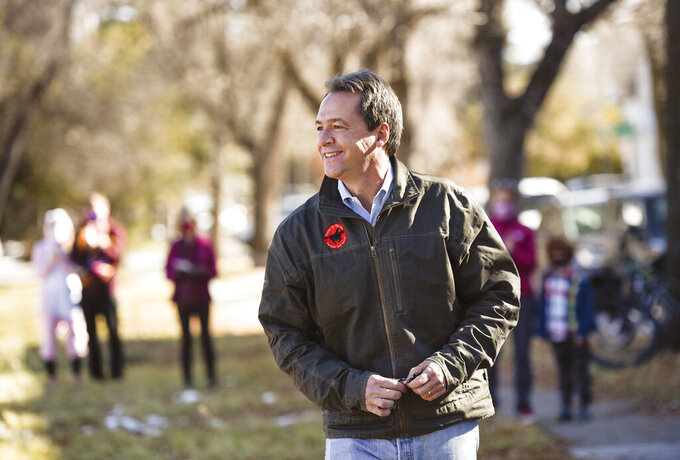 Gov. Steve Bullock speaks at a Democratic Party "Get Out The Vote" rally on Saturday, Oct. 31, 2020, in Bozeman, Mt. (Rachel Leather/Bozeman Daily Chronicle via AP)

HELENA, Mont. (AP) — Montanans have cast a record number of votes in this year's general election, in part because of close races that could change the political direction of the state and the country.

Most people are voting by mail because of the coronavirus pandemic.

Through late Monday afternoon, 529,168 absentee ballots had been received by county election offices, which is nearly 12,300 more than the 516,901 votes counted in the 2016 general election, according to the Secretary of State's Office totals.

The race between Republican U.S. Sen. Steve Daines and his Democratic challenger, Gov. Steve Bullock, could help shape the majority in the U.S. Senate.

Republican State Auditor Matt Rosendale and former Democratic state lawmaker Kathleen Williams are vying for Gianforte's U.S. House seat in another race that is expected to be close.

Montanans have not favored a Democratic presidential candidate since 1992, when Bill Clinton received nearly 38% of the vote, George H.W. Bush received 35% and Ross Perot pulled in 26% of the votes cast. A Democratic candidate hasn't received a majority of the vote in Montana since Lyndon B. Johnson received 59% in 1964. It was Johnson who led the country through John F. Kennedy's assassination a year earlier.

Larger counties started counting mailed-in ballots on Monday under a law passed by the 2019 Legislature. No results can be released until the polls close at 8 p.m. Tuesday.