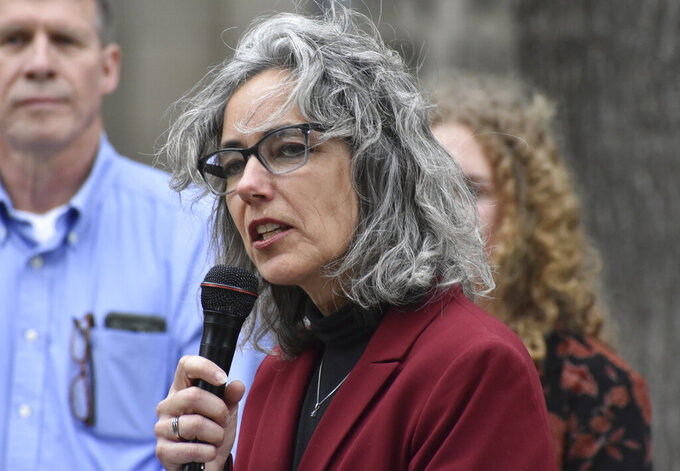 Rosendale talks glowingly about Trump's actions since COVID-19 hit the United States, while many have criticized his response to the coronavirus — including Rosendale's opponent.

Democrat Kathleen Williams slams the federal response to the virus, even in Trump country, saying states like Montana were left without federal support as they sought to develop testing strategies that would permit them to reopen their economies while limiting the spread of the virus.

“I think we could have responded much more effectively if there had been some leadership at the federal level on that,” she told The Associated Press.

Williams said there has been a lack of leadership on this issue from Montana’s U.S. House seat, which is currently occupied by Republican Greg Gianforte.

“We’re just seeing nothing, and it’s frustrating,” she said.

Rosendale celebrated the president’s decision to limit travel to and from China in late January and his efforts to reopen the economy. “He was very decisive in the very beginning of this,” he told AP. “I think he’s been very prudent, and very effective.”

Trump endorsed Rosendale in February and made four trips to Montana to drum up support for him when he unsuccessfully tried to unseat Democrat U.S. Sen. Jon Tester in 2018. Rosendale lost that race by 4 points.

Like Rosendale, Williams comes to this race with something to prove. This is her second attempt at retaking a seat held by Republicans since 1997. In 2018, she fell short of defeating Republican Greg Gianforte, another Trump darling, coming within 5 points of victory.

The House seat opened up this year after Gianforte decided to run for governor, with incumbent Democrat Steve Bullock termed out and running for U.S. Senate.

Paul Pope, a political analyst and professor of political science at the Montana State University in Billings, says the pandemic could be the issue that puts the seat within Democrats' reach.

“Candidates who endorse Trump’s approach to politics and governing are struggling in the polls,” Pope said, calling the Montana House race “incredibly tight.”

Rosendale, who has served as state auditor since January 2017, is no stranger to the campaign trail. He first ran for U.S. House in 2014, losing the primary in a crowded field. Now, he is hedging his campaign on the Republican party line — emphasizing his support for Trump’s border wall with Mexico even in a state on the opposite side of the county.

Williams comes to the race without a strong attachment to name brand Democrats. She is building on her career in environmental conservation and her time serving in the state Legislature, where she developed a reputation for working across the aisle. She hopes to bring that same spirit to the U.S. House, where “hyper partisanship has gotten out of control," she said.

According to Pope, Williams has positioned herself to attract independent voters in the state, thanks to her appeal as a conservationist, a popular perspective in a state that is home to two national parks and a robust fishing and hunting tradition.

As Montana joins other states in facing a sharp spike in coronavirus cases, Rosendale is holding out that Trump will return to the state to campaign on his behalf. But in-person campaign events could become a liability.

“I think the best they can do is smaller, more intimate affairs,” Pope said.

Trump’s rally in Oklahoma in late June was poorly attended, reportedly because of coronavirus-related concerns, and contributed to a surge of COVID-19 cases in the state, according to health officials. Pope thinks the same thing could happen in Montana.

Williams hoped the current campaign will be like her previous one — built on connections with Montanans across the state. In the months preceding the coronavirus outbreak, she said she put 75,000 miles on her vehicles, crisscrossing the state to meet voters.

In Montana, which is more than 1.5 times the size of Britain, candidates often spend countless hours on the road as they venture to meet voters in person. But for now, Williams says that's off the table.

“We’re discussing how we can ensure that we can get out and talk to Montanans and listen to their hopes struggles and dreams but do it safely,” Williams said.

Williams has not held in-person campaign events since March. Rosendale held two in-person events in early June, before entering a 14-day quarantine after coming in contact with Donald Trump Jr.'s girlfriend, who later tested positive for the virus, at a Republican fundraising event.

In a tight race, the campaigns' response to the coronvirus could become the deciding factor.

“We continue to regroup and figure out — how can we reach out and touch as many voters as possible?” Rosendale said. “Touch being, you know, virtual."

This story was first published on July 20, 2020. It was updated on July 24, 2020, to make clear that Democratic candidate for Montana’s U.S. House seat Kathleen Williams statement on the lack of leadership on a federal testing policy for COVID-19 was criticism directed specifically at current U.S. House Rep. Greg Gianforte.