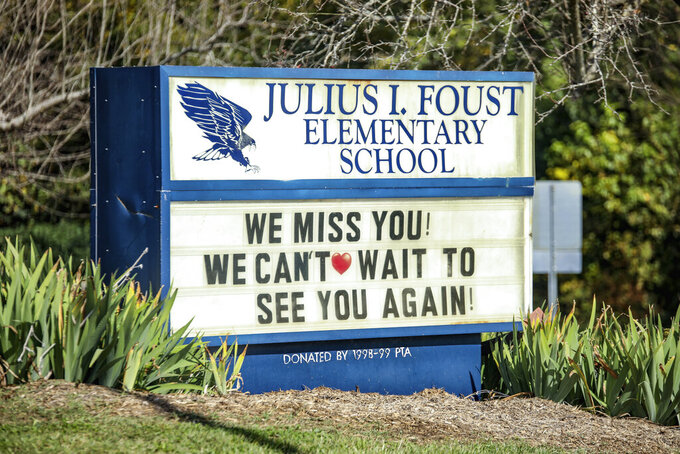 FILE - This Friday, Oct. 23, 2020 file photo shows a sign for the Julius I. Foust Elementary School in Greensboro, N.C. A report from the state's Department of Public Instruction released in December 2020, estimates the whereabouts of less than 1% of the roughly 1.5 million students in the state system is unknown. (Abby Gibbs/News & Record via AP)

Lawmakers and educators worry more students are falling through cracks in the system than is presently known, as the coronavirus pandemic upends students' learning plans and keeps some out of virtual or physical classrooms.

David Stegall, the North Carolina Department of Public Instruction's deputy superintendent of innovation, told lawmakers earlier this month that a survey the state conducted of some districts concluded that the whereabouts of about 0.7% to 1% of the state’s 1.5 million K-12 public school students are unknown.

This happens when a school has lost contact with a student, often because the student dropped out without alerting the school or moved elsewhere without the parent notifying the school or responding to repeated requests to get their kid back in class.

If a student misses at least 10 consecutive days of school in North Carolina, they are typically unenrolled, and the school works to account for them. The education department said in a statement that “unaccounted for” doesn’t necessarily mean the school doesn’t know where a student is or that the student is in danger.

North Carolina has long kept track of enrollment and attendance numbers but has no database for counting the number of students who educators can't account for. Republicans and Democrats on the Joint Legislative Education Oversight Committee asked the department to provide the information and now worry the estimates grossly understate the scope of the problem.

Rep. Craig Horn, a Republican from Union, said he heard reports in his district and elsewhere earlier this year that upward of 1 in 5 students could not be found or had parents who didn’t inform the district that their child moved and enrolled elsewhere. He believes that number has fallen slightly but remains nowhere close to the state’s claims.

“I talk to superintendents, principals and teachers across this state, and I’m hearing numbers significantly higher than 1%,” Horn said. “I’m hearing numbers going from 8% to 14%. I just find it very difficult to believe that if we had 20-25% students missing in May that now we only have .7%. I’m sorry. It just doesn’t ring right.”

In the Dec. 1 hearing with members of Horn’s committee, Stegall said he was “relieved” the numbers weren’t higher and noted the state’s efforts to track people down.

“Our schools are continually working with social workers, truancy officers, their counselors to track down every student,” Stegall said. “And sometimes, that means not only home visits but visiting neighbors, friends, family and trying to find out where they may be.”

Erik Naglee, a principal at Page High School in Greensboro, has worked to support the roughly 1,800 students at his school who were learning entirely online during the two fall quarters this year. He said several dozen students remain unaccounted for and dozens don’t have access to a computer or the Internet, disrupting their ability to show up to class even when they’re accounted for.

Three or four buses serve as WiFi hotspots in some of the community’s lowest-income neighborhoods, but that is only helpful to those who already have devices at their disposal. Naglee and fellow administrations spent a weekend earlier this month tracking down seniors to give them hard copies of learning materials and help them remain on course to graduate.

State Rep. Ashton Clemmons previously worked as a local elementary school principal for eight years and has three children enrolled in public school. The Democrat from Guilford questions the accuracy of the state’s estimates and wants the education department to adopt a broader definition of “unaccounted for” that also factors in students who are technically enrolled but haven’t been able to learn and keep in contact with their teachers during the pandemic.

“Signing in one time doesn’t mean you’re accounted for from my perspective,” Clemmons said.