More than 400 days between home matches for A-League team 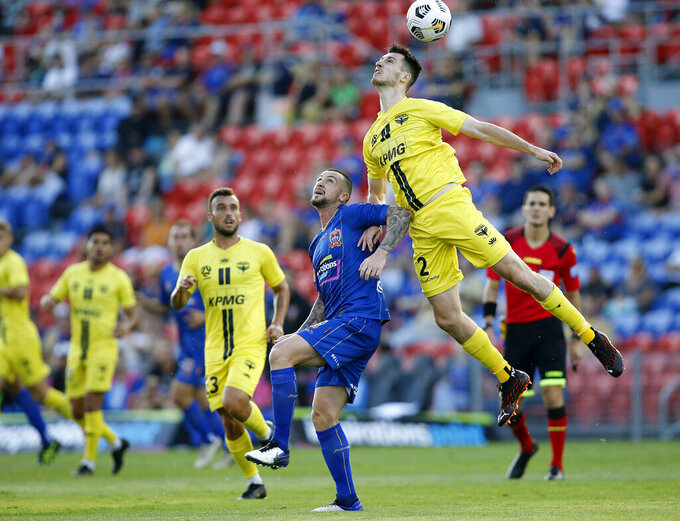 Liam McGing, right, of Wellington Phoenix jumps over Roy O'Donovan of the Newcastle Jets to head the ball during their A-League match in Newcastle on Feb. 28, 2021. The A-League announced Friday, April 30, 2021, that the Phoenix, fighting for a playoff spot, will play a home match in the New Zealand capital of Wellington on May 22. (Darren Pateman/AAP Image via AP)

SYDNEY (AP) — It's been a long time between home matches for the A-League's Wellington Phoenix: more than 400 days in fact. The coronavirus-forced drought will soon end.

The A-League announced Friday that the Phoenix, vying for a playoff spot, will play a home game in the New Zealand capital of Wellington on May 22 against Western United. That will be followed on May 30 by the Phoenix' last regular-season match of the season in Auckland against the Perth Glory.

That's 433 days since the Phoenix played at Wellington's Sky Stadium on March 15, 2020, when they beat the Melbourne Victory 3-0 during the 2019-20 season. The competition was halted because of the pandemic after that match and the Phoenix squad later had to relocate to Australia.

Fans will be allowed to both games in New Zealand in May, and officials are hoping that 15,000 might attend each match. The league stressed that the matches are subject to no further outbreaks of COVID-19 that could affect the current travel “bubble" that allows quarantine-free travel between New Zealand and Australia.

The Phoenix are in eighth spot, just two points outside the top six which qualify for the playoffs.

Because of the coronavirus restrictions and a ban at the time on travel between New Zealand and Australia, the Phoenix set up a “home-away-from-home” in Wollongong south of Sydney on Nov. 1 of last year for the 2020-21 season. They have played 10 home games in Wollongong and another in Newcastle north of Sydney.

It has meant being away from families and friends since then. A-League Commissioner Greg O’Rourke said the competition owed some thanks to all those involved.

“Being away for so long hasn’t been easy for the players and staff by any stretch of the imagination, and it's credit to them that Wellington are firmly in the mix to finish in the top six,” O’Rourke said.

“Because of the travel restrictions imposed by the government in light of the coronavirus pandemic, having Wellington based on Australian soil was the only way we could play this season. The fact they have done so without complaints, and just as importantly have played some great football along the way, is testament to (coach) Ufuk Talay and his players."

They're not the only professional sports team from New Zealand forced to re-base in Australia during the pandemic.

The pandemic and travel ban also forced Super Rugby to hold separate Australian and New Zealand competitions, although teams from both countries will play each other in a joint trans-Tasman tournament beginning in mid-May.