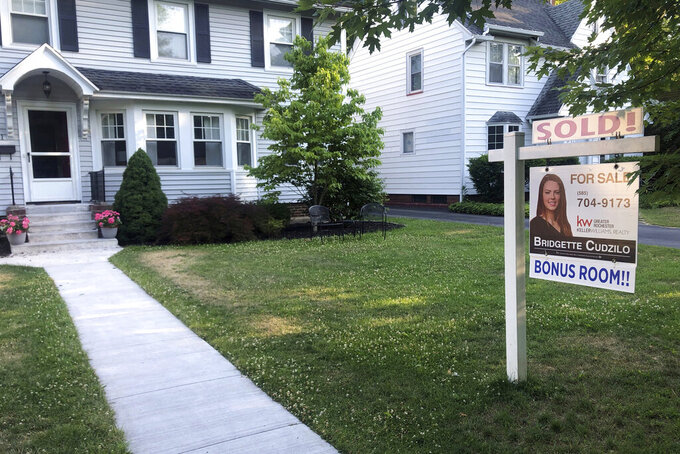 FILE - In this July 4, 2020 photo, a sold sign hangs in front of a house in Brighton, N.Y. More Americans signed contracts to buy homes in July, a sign that the hot housing market should continue into the fall season. (AP Photo/Ted Shaffrey)

The National Association of Realtors said Wednesday that its index of pending sales rose 8.8% to a record high of 132.8. An index of 100 represents the level of contract activity in 2001. It had sunk to a low of 69 in April, when buyers and sellers were sidelined as the coronavirus swept through the U.S.

Contract signings are a barometer of finalized purchases over the next two months, so this month’s numbers point to continued strong sales into October.

The housing market has been one of the highlights of the U.S. economy, which is still trying to get back its pre-virus momentum. Contract signings are now 24.2% ahead of where they were last year, after falling behind last year’s pace earlier in the year because of the pandemic.

The positive pending home sales numbers follow a pair of indicators showing continued strength in the housing market. The National Association of Realtors said last week that sales of existing homes rose 2.4% in August to its highest level since 2006. Sales are up 10.5% from a year ago and back to pre-COVID-19 levels of early 2020. Also last week, the Commerce Department reported that sales of new homes rose a solid 4.8% in August after surging 13.9% in July.

Historically low interest rates of less than 3% are pushing buyers into the market, even as home prices rise due to lack available properties.

All four regions of the U.S. saw more contract signings for the third straight month.