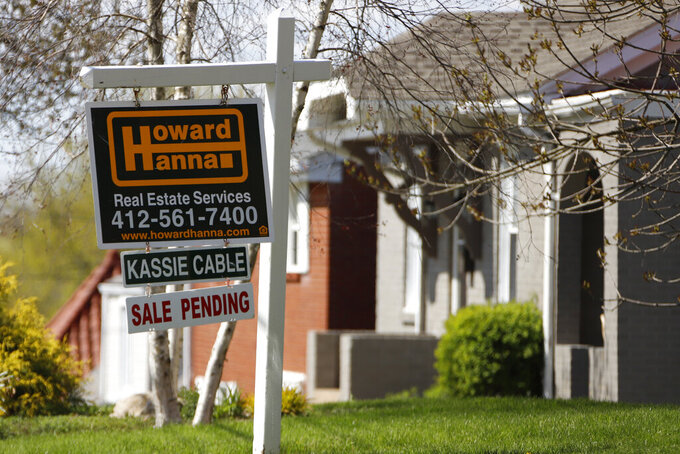 This Monday, April 27, 2020 photo shows a sale pending sign on a home in Mount Lebanon, Pa. The number of Americans signing contracts to buy homes rose for the second straight month as the housing market appears to be recovering from a devastating spring freeze because of the coronavirus outbreak. The National Association of Realtors said Wednesday, July 29, that its index of pending sales rose 16.6% to 116.1 in June.(AP Photo/Gene J. Puskar)

SILVER SPRING, Md. (AP) — The number of Americans signing contracts to buy homes rose for the second straight month after a devastating spring freeze brought on by the coronavirus outbreak.

The National Association of Realtors said Wednesday that its index of pending sales rose 16.6%, to 116.1 in June, its highest level since 2006. That's up from a reading of 99.6 in May.

Contract signings are now 6.3% ahead of where they were last year after being significantly behind last year's pace due to the pandemic. An index of 100 represents the level of contract activity in 2001.

All four regions saw more contract signings for the second straight month. The Northeast led the way with a 54.4% increase. Sales in the Midwest, South and West all jumped around 12%.

“It is quite surprising and remarkable that, in the midst of a global pandemic, contract activity for home purchases is higher compared to one year ago,” said Lawrence Yun, NAR’s chief economist. “Consumers are taking advantage of record-low mortgage rates resulting from the Federal Reserve’s maximum liquidity monetary policy.”

Freddie Mac reported last week that average interest rates on a 30-year fixed rate mortgage rose to 3.01%. The average had been 2.98% the previous week, the first time in 50 years that it slipped below 3%. The Federal Reserve wraps up a two-day meeting Wednesday and is not expected to change its main borrowing rate.

In May, the number of Americans signing contracts to buy homes rebounded a record 44.3% after plunging during the usually busy spring season as buyers and sellers were sidelined by coronavirus-related closures and regulations.

May's recovery was the highest month-over-month gain in the index since since its inception in January 2001.

Last week, the government reported that sales of new homes jumped 13.8% in June, the second straight increase after two months when sales plunged as the country went into lockdown because of the coronavirus. June’s increase followed a 19.4% jump in May, further evidence the housing market has turned around.

The housing sector has been one of the more resilient segments of the U.S. economy as the pandemic drags on. But coronavirus infections are surging in the South and West, regions that in recent years have led the entire sector in activity.

“While this is another piece of positive news for the housing market, there is some uncertainty ahead,” said Joel Kan of the Mortgage Bankers Association. “COVID-19 cases are rising in many parts of the country, the unemployment benefits extension remains in doubt, and housing inventory remains tight.”

More than a million Americans continue to file for jobless benefits every week, while some U.S. companies are posting billion-dollar-plus quarterly losses. The government on Thursday will issue its first estimate of U.S. economic activity for the April-June quarter, and economists are expecting a record-shattering contraction of perhaps 30% or more on an annual basis.