Morikawa back from missed cut with strong debut at Muirfield 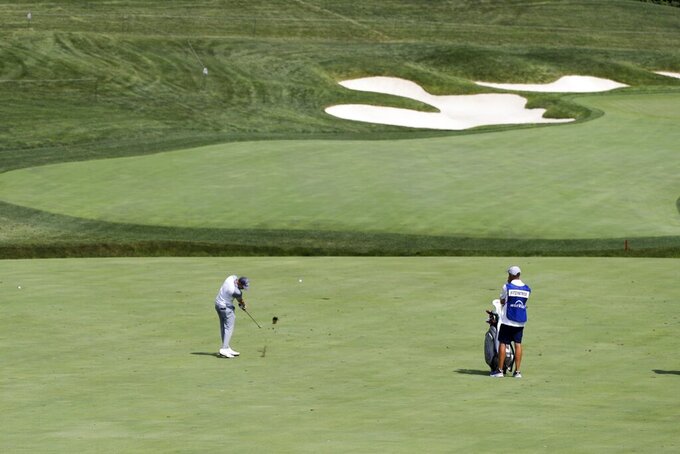 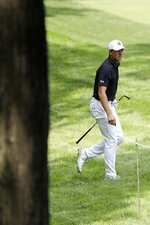 DUBLIN, Ohio (AP) — Collin Morikawa didn't get rattled by his first missed cut as a pro or his first time playing Muirfield Village.

Morikawa finally had a forced weekend off two weeks ago after 22 consecutive cuts to start his PGA Tour career, three short of the standard set by Tiger Woods. He bounced back Thursday in the Workday Charity Open with a 7-under 65 for a one-shot lead over Adam Hadwin.

It was a quiet day of work, typical for the PGA Tour with no spectators allowed in the return from the COVID-19 pandemic shutdown. It was never more evident at Muirfield Village, which typically has enough fans to frame just about every hole.

Morikawa goes about his work quietly in any circumstances, and he was dialed in from the start of a relatively calm and steamy afternoon on the course Jack Nicklaus built. His shot into the par-5 fifth settled 3 feet away for eagle. All but one of his birdie putts was inside 12 feet. The only setback was a bogey from the fairway on the 18th.

“It's a beautiful track. It’s a very tough course, obviously, but you just have to map your way around it,” Morikawa said. “You've got to be really smart. If you’re not in the fairway, you’ve got to make sure you play smart. I was playing smart but I felt good with my irons, so I was able to attack some pins when they were accessible.”

He liked it so much that Morikawa is even more excited about spending two weeks at Muirfield Village.

For the first time in 63 years, the PGA Tour will have tournaments on the same course in consecutive weeks. The Workday Charity Open fills a void this year for the John Deere Classic, which decided to cancel without being able to have spectators, a pro-am or corporate hospitality.

The second week at Muirfield Village — the Memorial — was supposed to be the first with fans since the PGA Tour returned June 11. That plan was scrapped at the last minute and it was clear how much work went into it.

There were signs for spectator parking along the streets outside the club. Concession and hospitality tents were a few days away from being completed. There was no point taking them down, because sound travels when no one is around.

Rory Sabbatini found out the hard way. He was at the top of his swing for his opening tee shot when a volunteer some 80 yards away laughed in conversation. Sabbatini flinched, sent his drive well to the right and he stood looking at the volunteer, too far away to realize what had happened.

Jon Rahm was in a perilous spot in juicy rough left of the 14th green, facing a downhill chip toward the water. He took a full swing for a flop shot, it came out softly and raced down the green and into the cup for a birdie.

That hole — that shot — is best known for when Tiger Woods chipped in for par on his way to victory in 1999. Rahm was a 4-year-old in Spain at the time, but apparently he has seen enough video of the shot that as he stood to the side of the green, he smiled and said of the empty theater, “Just like when Tiger did it.”

Phil Mickelson made plenty of noise, at least for nine holes. Lefty was 4 under at the turn and narrowly missed a 10-foot birdie chance on the 11th. He made bogey from the bunker. He missed a 5-foot par. He needed two chips from 25 feet to get on the 14th green. He hit in the water for double bogey on the 16th. He shot 41 on the back for a 73.

Brooks Koepka played for the first time since withdrawing from the Travelers Championship two weeks ago after his caddie tested positive for the coronavirus. He used PGA Tour winner Marc Turnesa as a caddie for this week, which might be a short week. Koepka opened with a 74.

Most of the good scoring came in the morning. Hadwin had five birdies over his last eight holes for a 66. Nick Taylor, a new father who chose to stay home in Canada for an extra month after the tour resumed, had an eagle at No. 11 and kept bogeys off his card for a 67. He was joined by past Muirfield Village winner Hideki Matsuyama.

Keegan Bradley had a 69 and was among 35 players who shot in the 60s. One shot summed up the environment at PGA Tour events at the moment. He hit a 6-iron on the par-3 fourth hole for an ace, and didn't even know it.

“There was probably five or six people up by the green, and no one did anything,” Bradley said. “We walked up to the green, I fixed my ball mark. I'm looking all over the green for it. And someone just goes, ‘It’s in the hole,' like really casually. It was just bizarre.”

And it will be that way for two weeks.