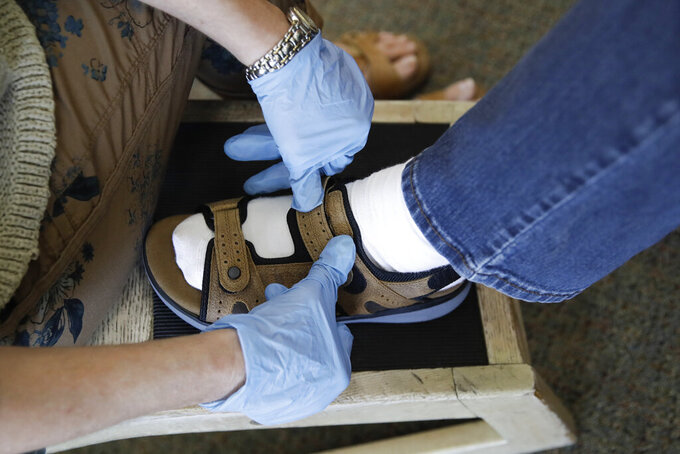 Salesperson Jennifer Blythe-Freiner uses rubber gloves to help Yvonne Wright try on a pair of shoes at Brown's Shoe Fit Co., Wednesday, May 20, 2020, in Visalia, Calif. Tulare County's board of supervisors voted 3-2 Tuesday to move further into the state's four-stage reopening plan than is allowed. That means nearly all businesses and churches could reopen, though county officials said businesses should adhere to state guidelines on social distancing and other health measures. (AP Photo/Marcio Jose Sanchez)

SACRAMENTO, Calif. (AP) — As California moves through its methodical four-step process for reopening, some counties are pushing the boundaries by bypassing the state's orders or refusing to enforce rules against businesses that reopen without state permission.

Tulare County, in the middle of the state's vast Central Valley agricultural region, was the latest. Its Board of Supervisors voted Tuesday to move into phase three of reopening, giving barbershops, movie theaters and churches the go-ahead even before the county had been approved by the state to go deeper into phase two.

The state called the county’s actions “hasty and careless” and warned in a letter it could lose state and federal disaster relief money. State officials made the same threat to three other counties that defied Gov. Gavin Newsom's stay-at-home order earlier this month.

County and state officials were in discussions after the letter was sent, Tulare County Supervisor Amy Shuklian said Wednesday. She thought moving ahead was a rash decision and voted against it.

Two weeks ago, under increasing pressure to move more quickly to reopen the state's economy, Newsom issued health standards that counties must meet to more quickly proceed into phase two than called for under state rules. More than 20 mainly rural Northern California counties were approved within days to resume dining in restaurants and in-store shopping, with restrictions aimed at keeping people apart.

Larger counties criticized the rules as too strict, arguing the requirement that counties record no virus deaths for two weeks made it impossible for them to reopen more quickly. Newsom relented and issued a set of relaxed standards this week, and more large counties were approved Wednesday.

Among them were San Diego County, the state’s second-most populous county, along with Kern, Santa Barbara and Ventura. All together, about 40 of 58 counties have been approved.

Merced County also won approval to move into phase two. Its sheriff, Vernon Warnke, is among several in California who have said publicly they won't enforce violations of coronavirus orders.

“The citizens themselves can make informed decisions on how to proceed and protect their lives and livelihood,” Warnke said last weekend in a letter to Newsom’s office.

Earlier in the month, electric car maker Tesla faced no penalties when it reopened its factory in Fremont in defiance of Alameda County rules. While Tesla founder Elon Musk knew he was breaking the rules, there is significant confusion about what is allowed since it varies county to county.

Newsom has stressed that counties have the flexibility to proceed more slowly than what's allowed under his state order. That has been the case in Los Angeles County and the San Francisco Bay Area.

Some businesses in those places and elsewhere — especially hair salons, which are not allowed until phase three — have flouted the rules and opened on their own. In virtually all cases, authorities have done little more than issue warnings.

Even many businesses that are allowed to reopen have trouble following the often dense rules. And with so many businesses reopening in varying ways, state, county and local governments can't police them all.

In Los Angeles County, inspectors found that more than 1,000 out of 1,600 businesses visited were not in compliance with the county's directives, public health director Dr. Barbara Ferrer said. But she said the county worked with the businesses to implement the measures. That's just a fraction of the businesses in the county that's home to 10 million people, a quarter of California's population.

The enforcement challenges could come into greater focus if more churches hold in-person services, something that's not yet allowed by the state. It is considered a high-risk activity because a large group of people are in close proximity.

On Tuesday, the U.S. Justice Department sent a letter to Newsom saying his order violates the Constitution. Lawyers representing a Lodi church that filed a lawsuit against Newsom said Wednesday they expect more than 3,000 churches will hold services on May 31.

Rebecca Nanyonjo-Kemp, the public health director in Merced County said enforcement is “incredibly important” against things such as mass gatherings. But she noted many of the state's guidelines have relied on an “honor system” of compliance.

“A lot of this is really neighborly accountability,” she said.

In Tulare County, Supervisor Kuyler Crocker said the board's vote reflected the reality that the county isn’t going to enforce the state’s order and that many businesses already were operating beyond the rules.

“If we don’t have voluntary compliance, then what’s the point?" he said, adding the state rules aren’t consistent and seem to be ever-changing, leaving residents and elected officials wondering what is safe.

Newsom named Tulare County on Monday as one that might not be able to meet the state's health guidelines because of virus outbreaks at nursing homes. In Tulare County, home to 442,000 people, nursing homes account for most of the 71 deaths and a large percentage of the confirmed infections. Local officials blame the state, which regulates nursing homes.

Crocker said the county is focused on protecting the residents of these facilities by reaching out to administrators and ensuring they have adequate equipment and training.

Beyond revoking federal and state disaster funding, the state has enforcement tools through the Alcoholic Beverage Control department and the Board of Barbering and Cosmetology. But both prioritize education over discipline.

Other counties that won approval for reopening Wednesday were Sacramento, San Luis Obispo, Yolo and Napa, the first in the San Francisco Bay Area.

At Napa’s Downtown Joe’s Brewery and Restaurant, customers were starting to trickle in Wednesday morning, when waiters served breakfast to five tables that had been separated to allow for social distancing, owner Joe Peatman said.

“Now we’re able to serve people inside our building and outside on our patio, and it’s a blessing because we weren’t going to make it,” Peatman said.