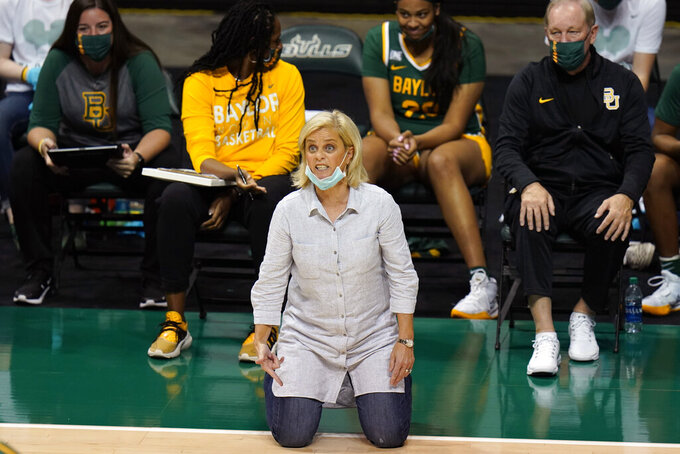 Baylor head coach Kim Mulkey is shown during the second half of an NCAA women's college basketball game against South Florida Tuesday, Dec. 1, 2020, in Tampa, Fla. No. 6 Baylor canceled its much-anticipated home game Thursday night against No. 3 UConn after Lady Bears coach Kim Mulkey tested positive for COVID-19. “I immediately self-quarantined and did not re-join the team when our staff and players came back from our holiday break on December 28," Mulkey said in a statement Tuesday, Jan. 5, 2021. (AP Photo/Chris O'Meara)

Baylor said it began restricting team activities after Mulkey tested positive on Monday, the same day she had been planning to rejoin the team.

The 58-year-old Mulkey missed Baylor's win Saturday at TCU because of contact tracing after being exposed on Christmas Day to a family member who tested positive.

“I immediately self-quarantined and did not re-join the team when our staff and players came back from our holiday break," Mulkey said in a statement Tuesday. “I produced three negative tests leading up to our game at TCU (on Saturday). However, I decided that it was important to continue quarantining in case the virus took time to come to fruition.”

Mulkey now hopes to rejoin the program Jan. 15, if she shows no symptoms.

Kansas State, another Big 12 program, said Tuesday it also has paused team activities following COVID-19 test results and contract tracing procedures, leaving the Wildcats unable to meet league-mandated roster thresholds to play games. They have postponed their next two games — Sunday at Baylor and Jan. 14 at home against TCU.

UConn (6-0) is now scheduled to play at home Saturday against Providence in a Big East game when Huskies coach Geno Auriemma goes for his 1,098th win. That would tie him with the late Pat Summitt for second on the career list.. Stanford coach Tara VanDerveer set the record this season and now has 1,103.

The next scheduled game for Baylor is Jan. 13 at Kansas, but the school medical staff is conducting additional COVID-19 testing to determine the length of the program’s restricted activity.

The pandemic has disrupted college basketball since the season began in late November, with scores of games canceled or postponed. The women’s teams at Duke and SMU already have ended their seasons early.

UConn has already lost nonconference games this season with Mississippi State, Louisville and now Baylor because of COVID-19 issues. Auriemma said he is open to rescheduling one or more of those games, or finding another nonconference game.

No. 2 Louisville hasn’t played an ACC game since its league opener Dec. 9 at Duke. The Cardinals had more conference games postponed this week, and on Tuesday played nonconference opponent Tennessee-Martin for the second time this season. Louisville at one point went 23 days without a game.

Auriemma said he and Louisville coach Jeff Walz have talked the last couple of weeks about finding a time to play each other.

“And every time something does come up that could look possible, something comes up that makes it impossible,” Auriemma said. "That seems to be the case for a lot of schools and a lot of conferences.”