Murders in Mexico, especially of women, grew during pandemic 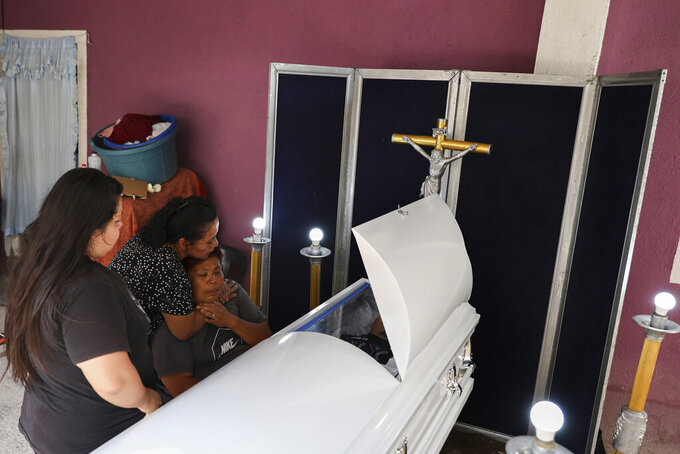 FILE - In this July 2, 2020 file photo, Martha Alvarado, sitting, is comforted in her home during the wake for her son Jorge Bravo who was killed along with at least 26 others in an attack at a drug rehabilitation center where he was being treated in Irapuato, Mexico. New government figures show the number of homicides in Mexico has grown 1.9% during the new coronavirus pandemic, according to data released Monday, July 20, however, the killings at this rehab center were not included in the new data. (AP Photo/Eduardo Verdugo, File)

MEXICO CITY (AP) — The number of homicides in Mexico has grown during the new coronavirus pandemic, including a 9.2% spike in killings of women, according to government figures released Monday.

Activists have long worried that the increased confinement of families to their homes would increase killings of women, and they indeed grew from 448 in the first half of 2019 to 489 in the same period of 2020.

Some experts, meanwhile, had hoped the lockdown caused by the coronavirus would limit the drug gang activity that is a major cause of the violencue, but on Monday the Defense Department released an analysis saying that a disturbing video of massed drug cartel gunmen posted online last week was indeed genuine and had received about 16 million views in a few days.

The department said the video showed “evidence of military-style training” and may have been timed to coincide with the July 17 birthday of Jalisco cartel leader Nemesio "El Mencho" Oseguera.

The department said the video was apparently filmed near the border of Jalisco and Guanajuato states and shows an “elite group” of cartel gunmen formed in 2019 who have been linked to an attack on police, but who have apparently not used the armored vehicles in combat or directly attacked federal forces.

Many of the trucks have welded steel-plate armor, turrets and firing slots. Some were painted with the Jalisco cartel's initials.

The army said “the armament, the equipment and the vehicles used show an unlimited use of money earned from illegal activities.” While other drug cartels have posted videos displaying their impressive firepower in the past, the army said the group shown in the Jalisco tapes “is the only group of this type.”

The department also suggested the Jalisco cartel may have been filmed that and another video “in response” to another drug gang leader's suggestion that he might call on the Sinaloa cartel for help in fighting Jalisco. Jalisco is fighting the Santa Rosa de Lima gang for control of the central state of Guanajuato.

In a video posted in June, José Antonio Yépez, the leader of the Santa Rosa gang, spoke about allying himself with the Sinaloa cartel to fight off the incursion by Jalisco. That proxy war has already made Guanajuato the deadliest state in Mexico. Guanajuato was where gunmen burst into a drug rehabilitation center in early July and killed at least 27 people. Those killings were not included in the figures released Monday.

The Public Safety Department noted in its report that the rate of growth in homicides has eased somewhat. But the continued high level of killings is likely to draw more attention to President Andrés Manuel López Obrador's policy of avoiding direct confrontation with the cartels. He prefers to address social problems like poverty and unemployment that he says contribute to crime.

The effects of the lockdown on crime were varied and in some cases unclear. Officals reported a 12.1% increase in street-level drug-dealing cases during the first six months of the year, but it was unclear whether that was due to reduced street traffic during the pandemic, which would have made drug deals easier for police to detect.

The pandemic did appear to have resulted in a steep drop in some types of crime. Because far fewer people are riding buses, robberies of passengers on public transportation dropped 45.1% during the first six months of the year, and kidnappings decreased by 37.3% compared to the same period of 2019. Other types of robberies were also down.