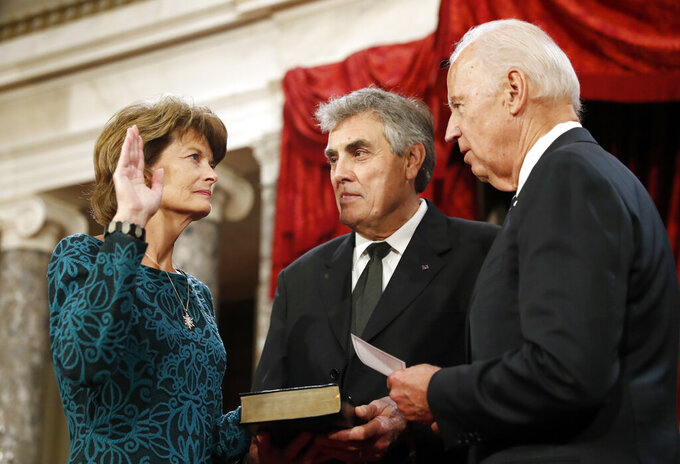 FILE - In this Jan. 3, 2017, file photo, Vice President Joe Biden, right, after administers the Senate oath of office to Sen. Lisa Murkowski, R-Alaska, as her husband Verne Martell holds a Bible, during a mock swearing in ceremony in the Old Senate Chamber on Capitol Hill in Washington as the 115th Congress begins. The oath, which normally doesn’t attract much attention, has become a common subject in the final days of the Trump presidency, being invoked by members of both parties as they met Wednesday, Jan. 6, 2021 to affirm Biden's win and a pro-Trump mob stormed the U.S. Capitol. Murkowski vowed to honor the oath she took and affirm the results of the presidential election while urging colleagues to do the same. (AP Photo/Alex Brandon, File)

WASHINGTON (AP) — Alaska Sen. Lisa Murkowski said Friday that President Donald Trump should resign, making her the first Republican senator to say he should leave office as backlash grows against his goading of violent supporters who stormed the Capitol.

“I want him to resign. I want him out. He has caused enough damage,” Murkowski told the Anchorage Daily News.

Murkowski told the newspaper that if the GOP doesn’t cut ties with Trump, she might leave the party. “If the Republican Party has become nothing more than the party of Trump, I sincerely question whether this is the party for me,” she said.

The four-term senator is one of Congress' more moderate Republicans and has long had a fraught relationship with her party. Even so, her vehement break with Trump underscores the burgeoning desire of Democrats and some Republicans to force him from office, even as his term expires Jan. 20 with the inauguration of Democrat Joe Biden.

There is growing momentum among House Democrats to impeach Trump for a second time as early as next week. Rep. Adam Kinzinger, R-Ill., has said Vice President Mike Pence and the Cabinet should use the 25th Amendment to force Trump from office. Sen. Ben Sasse, R-Neb., has said he would consider voting to remove Trump should the House approve impeachment articles.

Murkowski said Trump should leave if he’s not going to do his job. She cited his announcement that he would skip Biden's inauguration and his inattention to the COVID-19 pandemic, saying, “He’s either been golfing, or he’s been inside the Oval Office fuming."

She added, “He needs to get out. He needs to do the good thing, but I don’t think he’s capable of doing a good thing."

Murkowski's interview came after Republicans lost a pair of Senate runoff elections in Georgia that will give Democrats control of that chamber. The new breakdown is 50-50 but tips to Democrats with Vice President-elect Kamala Harris’ tiebreaking vote.

In a speech outside the White House on Wednesday, Trump spurred a crowd of supporters to head to the Capitol, where their attack resulted in five deaths and widespread damage and forced lawmakers to flee the building.

The storming occurred as Congress was meeting for its usually routine certification of electoral votes in the presidential race, which Trump has fallaciously claimed was marred by widespread fraud. His groundless assertions have been rejected by Democratic and Republican state officials across the country and by scores of state and federal courts, including the conservative-dominated Supreme Court.

Murkowski has clashed repeatedly with Trump, helping kill his 2017 effort to repeal former President Barack Obama's health care law. When she lost her Republican primary for Senate in 2010, she was reelected as a write-in candidate in the general election despite opposition from Sen. Mitch McConnell, R-Ky., the current Senate majority leader who was minority leader at the time.

She has been in the Senate since 2002, replacing her father, Frank Murkowski, who took office in 1981.