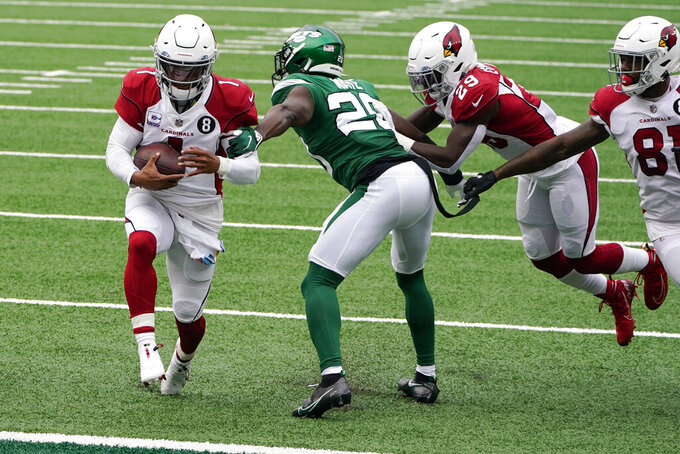 EAST RUTHERFORD, N.J. (AP) — The Arizona Cardinals certainly came to the right place to get back on the winning track. Everybody wins at MetLife Stadium against New York's rotten apples.

Having Kyler Murray and the offense put up nearly 500 yards against the hapless and winless Jets was almost predictable.

Murray ran for a touchdown and threw another to DeAndre Hopkins as the Cardinals snapped a two-game losing streak with a 30-10 victory over the Jets, further putting coach Adam Gase's future in jeopardy after an 0-5 start.

“I don’t want anyone on the team to feel satisfied with what happened today," said Murray, who threw for 380 yards. "That’s not what it’s going to be like every weekend. I hope everyone knows that. Sundays aren’t easy.”

Murray had a 2-yard TD run and hit Hopkins on a 37-yard strike on a day the Cardinals (3-2) had 496 yards in total offense. They had 500 yards until taking knees to end the game.

Chase Edmonds, who played his college ball at nearby Fordham, added a 29-yard TD run, Kenyan Drake tallied from a yard out and Zane Gonzalez kicked a 47-yard field goal. Arizona scored touchdowns on drives of 96, 89, 75 and 70 yards.

“Definitely needed a win,” said Edmonds, who scored three touchdown last season in a win over the Giants, MetLife's other weak link. "This was a must-win game just to get back on track.”

For the Jets' it was another frustrating week.

Gase sounded befuddled after the game.

“We got to get, you know, learn from this show," Gase said. “We got to figure out a way to play a full 60 minutes in which all three phases are playing well together. It’s just like one side’s playing while the other side’s not on.”

Playing with Joe Flacco in place of injured quarterback Sam Darnold and with running back Le'Veon Bell in the lineup for the first time since opening day, the Jets stayed close into the second half. They drew within 17-10 on an 11-yard pass from Flacco to Jamison Crowder, who had eight catches for 116 yards.

The Cardinals quickly put the game out of reach, scoring touchdowns on their next two possessions. Drake, who had a 31-yard catch on a fourth-and-1 from the Arizona 39 on the first drive, a powered his way into the end zone with :15 left in the third quarter. Murray (27 of 37 for 380 yards) capped a six-play, 96-yard drive with his perfect toss to Hopkins, who had six catches for 136 yards.

Flacco, who finished 18 of 33 for 195 yards, said he is not seeing any signs the Jets' locker room is falling apart

“I definitely don’t feel any finger pointing and things like that going on," Flacco said. “I think we’ve got good guys. We just got to kind of look at ourselves here and then start believing that we get the job done.”

THIRD AND NOT MANAGEABLE

The Jets came up short on three third-and-1 and one fourth-and-1 play in the first 34 minutes. Bell was stopped twice, running once inside and once outside. Jeff Smith dropped a pass and tight end Trevon Wesco took a handoff as an upback and was stopped in his tracks.

This marks the third straight year Darnold has missed games with injuries or illness. He missed three games as a rookie in 2018 with a foot injury and three games last season with mononucleosis.

Cardinals: LB Chandler Jones was ruled out after a first-half biceps injury. S Budda Baker returned to the lineup after missing a week following thumb surgery.

Jets: Receiver Chris Hogan was carted of in the fourth quarter with what looked like a knee injury. Gase said it was an ankle. ... Besides Darnold, the Jets had three other starters out this week: WR Breshad Perriman (ankle), OT Mekhi Becton (shoulder) and CB Bless Austin (calf).

Cardinals: finish a three-game road trip in Dallas on Sunday.

Jets: play at Miami next Sunday as NFL reorganizes schedule due to coronavirus pandemic.