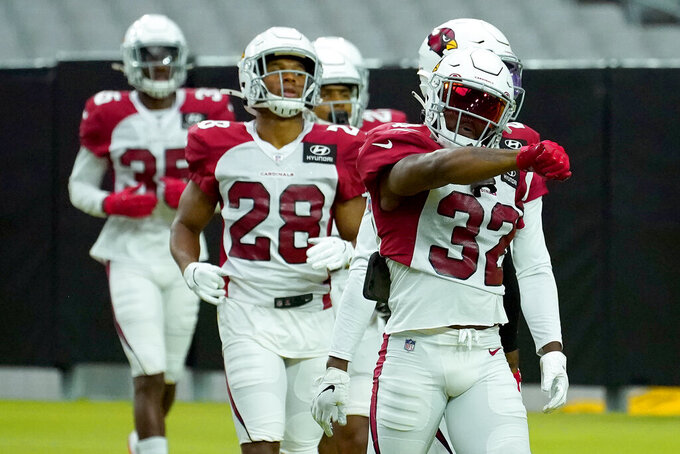 GLENDALE, Ariz. (AP) — Kyler Murray looks different now that he's entering his second NFL season, and it's not just because he's much more confident in his abilities or his role in the Cardinals' offense.

“He got a little swole, a big chest,” receiver Christian Kirk said grinning. “Most quarterbacks aren't too willing to go in there and bench press and do biceps, but he's all about it. He gets after it.”

The 5-foot-10, 207-pound Murray packed on a few pounds during the offseason, working to get his body in shape so he can handle the grind of a 16-game NFL season. Tossing around some weights with his teammates proved a good way to bond, and he hopes the hard-working mentality translates into a push for the playoffs.

“I didn’t try to go into the weight room and put on weight,” Murray said. “I think it’s just the maturation of getting older, working out. It just happened. I didn’t go into the offseason saying I need to put on 10 pounds or however many pounds.

"It just comes from working hard.”

Arizona's one of the more intriguing teams in the NFL this season after adding several key players in free agency and through the draft. The franchise finished 5-10-1 last year and it won't be easy making headway in the NFC West.

The Cardinals pulled off one of the biggest stunners of the offseason when they landed elite receiver DeAndre Hopkins in a trade that sent running back David Johnson to the Houston Texans. They were also active in free agency and used the No. 8 overall draft pick on linebacker Isaiah Simmons.

Not even a pandemic and strange offseason schedule could dull the excitement for second-year coach Kliff Kingsbury.

“Everybody in this building is excited about some of the players we brought in,” Kingsbury said. “We're returning a lot of the same coaching staff, same schemes, and so we're anxious, we're fired up to be back at work. We know how fortunate we are to have jobs and be pushing to make this thing work."

The new pieces are important, but all eyes will be on 2019 Offensive Rookie of the Year Murray. He was the No. 1 overall draft pick and threw for 3,722 yards, 20 touchdowns and 12 interceptions. He also ran for 544 yards and four touchdowns.

Now he's got a few more pounds of muscle to absorb the pounding of an NFL season — even if he hopes he doesn't have to use it.

“I try not to get hit in the first place,” Murray said smiling.

The Cardinals were thrilled to have some continuity in Kingsbury's second season, but haven't been able to take full advantage with all the offseason work done virtually.

Coordinator Vance Joseph has had to help several newcomers quickly adjust to a new defense, including Simmons and free agent linebackers Devon Kennard and De'Vondre Campbell, along with lineman Jordan Phillips.

Then there's Murray, who the Cardinals expect to take a big jump.

“Obviously you would have liked to have him on the grass for some of the offseason training,” Kingsbury said. “But just staying in touch with him the past few months, he's been working his tail off. It's been all football, all the time. I feel like he's still going to take some huge strides."

Receiver Larry Fitzgerald ages about as gracefully as anyone in NFL history. He's entering his 17th season and will be 37 years old by the time the season starts.

Fitzgerald isn't just clinging to a roster spot. He's once again expected to be another key contributor after catching 75 passes for 804 yards and four touchdowns last season.

With Hopkins now in town, Fitzgerald won't be the main target, but he'll be a significant one.

Kingsbury was the coach at Texas Tech before coming to Arizona. That experience in college might give him an advantage during the first few weeks of the COVID-19-affected NFL schedule.

NFL teams usually have four preseason games to prepare, but this year they'll have none. That's the usual setup in college, where teams always go straight from summer camp into game action that counts.

“You know what you've got and not what anyone else has,” Kingsbury said. “There's going to be some anxiety heading into that first week. It's going to be new for everybody.”

The Cardinals signed safety Budda Baker to a $59 million, four-year extension during training camp, securing a young defensive cornerstone through the 2024 season. Baker was one of the team's two Pro Bowl selections in 2019, and the 24-year-old is now among the league's highest-paid safeties.

All-Pro linebacker Chandler Jones had a career-high 19 sacks last season and has made it known he believes Michael Strahan's single-season record of 22 1/2 sacks is in reach.

“If there’s a year to do it, this could be the year to do it,” Jones said. “That’s a personal goal of mine. We have more help on our team, we have a better team. You see it on paper, but it’s right there for you.”