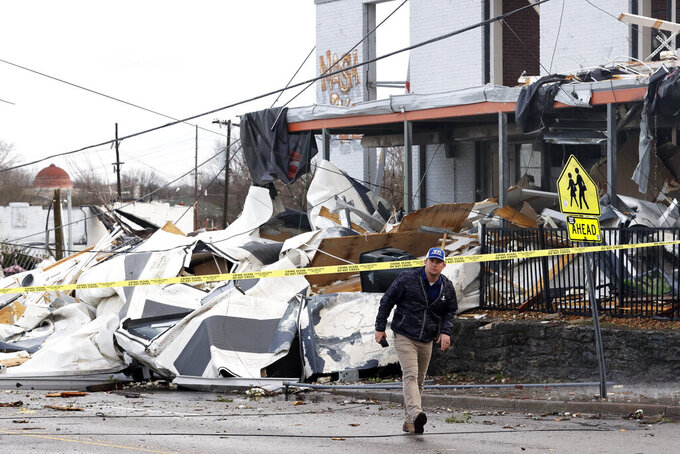 FILE - In this March 3, 2020, file photo, a man walks past storm debris Tuesday, March 3, 2020, in Nashville, Tenn. It has been nearly a year since deadly tornados tore across Nashville and other parts of Tennessee as families slept. The March 3 storm killed more than 20 people, some in their beds, as it struck after midnight. More than 140 buildings were destroyed across a swath of Middle Tennessee, burying people in rubble and basements. (AP Photo/Mark Humphrey, File)

NASHVILLE, Tenn. (AP) — When frantic messages started trickling in that a tornado had hit a beloved music venue in Nashville, Mike Grimes told himself it couldn't possibly be that bad.

Affectionately known as “The Beast,” the club was only 5 years old, but already had established a reputation as one of Nashville’s trendiest music spots, across the river from the city's tourist-laden honky-tonks on lower Broadway.

The venue, with a capacity limit of 475, quickly became known as a premier site for hosting big-name acts in an intimate setting. Margo Price, Cage the Elephant, John Prine, Maggie Rogers, Maren Morris, Sturgill Simpson and many others played there.

Maybe, Grimes thought desperately as he drove over to the club, the people texting him about the destruction were exaggerating.

But when he pulled up to The Beast, his stomach dropped. The tornado had ripped the roof cleanly off a little after 1 a.m., crumbling the majority of the walls and leaving a tangled mess of destruction behind.

“You just don't want to believe it,” Grimes said. “It was immediate shock.”

The March 3 storm killed more than 20 people, some in their beds, as it struck after midnight. More than 140 buildings were destroyed across a roughly 60-mile (97-kilometer) swath of Middle Tennessee, burying people in rubble and basements.

The six Basement East staffers who were cleaning up after the Sanders event escaped harm by running to the actual basement of the building just minutes before the powerful EF-3 tornado roared down the street. It took two staffers to shut the door against the winds, just as the twister passed over.

Right on the heels of the tornadoes, the virus outbreak slammed into the state with brute force last spring, and by Thanksgiving, Tennessee ranked among the worst hit in the country, with a record number of hospitalizations and cases. To date, more than 11,000 residents have died from COVID-19.

“It’s so strange to have a scenario where the building is gone and then we have something ... like COVID-19,” a confluence of devastating occurrences “that has never happened like this in our lifetime,” Grimes said.

As the virus raged on, the dream of once again packing Basement East full of music lovers seemed shakier than ever.

“There were times that thought crossed my mind: ‘It’s not going to happen,’” said Dave Brown, the club's other owner.

Basement East first opened its doors in 2015, but it took nearly five years for the venue to turn a profit. It wasn’t until 2020 that Brown and Grimes felt they could breathe, that what they were doing was working. The partners — who describe themselves as grown teenagers with a love for rock ‘n’ roll — had wanted to celebrate their five-year anniversary in April 2020, but the tornado and pandemic had other plans.

Now, as the anniversary of the two catastrophic events approaches, the partners are hoping to finally reopen. Amid signs that virus cases are dropping and with more people getting vaccinated, they’ve set their sights on this spring. But they still plan to require patrons to wear masks and will spread tables out throughout the club’s 5,000-square-foot (465-square-meter) space.

When the tornado struck Basement East last March, it left one thing standing: A portion of a wall mural with the slogan, “I believe in Nashville.”

Like that wall, the city itself is steadfast and resilient, Brown and Grimes note. Both believe Nashville's central role in the world of American entertainment and culture will ensure that it perseveres.

“The magic of music,” Brown said. “That’s what makes this place so strong.”