Nashville police chief to retire amid calls for resignation 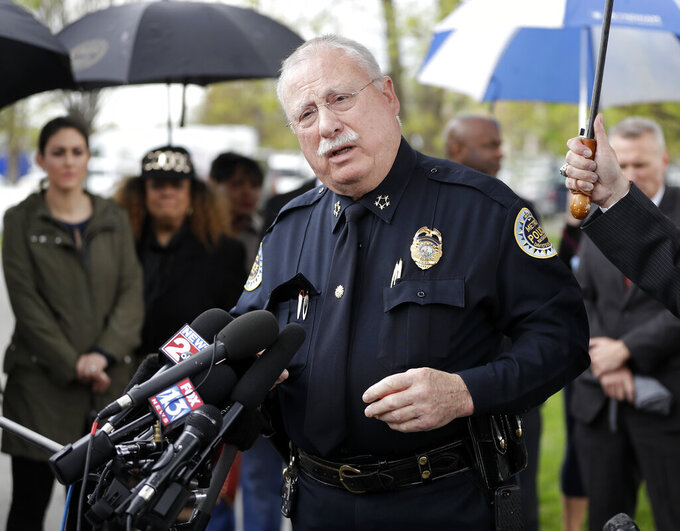 FILE- In this April 23, 2018 file photo, Metropolitan Nashville Police Chief Steve Anderson speaks at a news conference in Nashville, Tenn. Anderson announced, Thursday, June 18, 2020, that he will retire amid calls for his resignation. Anderson will step down after a national search for a new chief is completed. (AP Photo/Mark Humphrey, File)

NASHVILLE, Tenn. (AP) — The police chief of Tennessee's capital city has announced he will retire amid calls for his resignation and a wave of protests nationwide over policing.

Nashville Police Chief Steve Anderson will step down after a national search for a new chief is completed, Mayor John Cooper said in a statement Thursday. Cooper said Anderson, who took over as chief in 2010, intended to retire after serving 10 years in the role.

Anderson has been criticized in recent years, particularly after two high-profile deadly shootings by white officers of black men in 2017 and 2018. The city also has run into delays in trying to implement widespread use of body cameras for officers, with the mayor saying last week that the full deployment of the devices was beginning and that other precincts would begin getting them by February 2021 at the latest.

Calls for Anderson's resignation have intensified amid the nationwide wave of protests calling for police reforms, and grew even louder early this month, when Metro police announced arrest warrants for Nashville activists Justin Jones and Jeneisha Harris on riot charges, stating the pair were connected to vandalism of a police cruiser during a protest.

Police said the activists walked on the car, damaging it. Three hours after the announcement, Metro police recalled the warrants after reviewing “additional information” received by the department and District Attorney General Glenn Funk.

Activists across the nation are demanding changes to policing after the death of George Floyd, a black man who died last month in Minneapolis after a white officer pressed his knee against the handcuffed man’s neck for nearly 8 minutes.

In February 2017, then-Nashville officer Josh Lippert shot and killed Jocques Clemmons during a confrontation that happened after a traffic stop and chase. Police and prosecutors determined he fired only after he saw Clemmons was armed with a gun.

Officer Andrew Delke, who is charged with first-degree murder, fatally shot Daniel Hambrick from behind in July 2018 as Hambrick ran during a foot chase. Delke’s attorney has said the officer acted in line with his training and Tennessee law in response to “an armed suspect who ignored repeated orders to drop his gun.” Funk has argued Delke had other alternatives, adding the officer could have stopped, sought cover and called for help. Delke's trial has been delayed by the COVID-19 pandemic.

The American Civil Liberties Union of Tennessee, which called for Anderson to resign, also criticized the chief's level of cooperation with a new community oversight board of police that Nashville voters created after Hambrick's death.

Anderson drew some praise when officers handed out hot chocolate during the 2014 protests in Nashville after the fatal police shooting of Michael Brown in Ferguson, Missouri.

“In order for police practices to change in Nashville and in order to build trust between the Metropolitan Nashville Police Department and communities of color in Nashville, a change in leadership is essential,” the resolution stated.

Cooper said Nashville's focus will be on finding the best police chief, not specifically an African American one.

“It would be super, of course, to have an African American chief in Nashville, but they need to understand that they are being picked because they are the best chief,” Cooper said.

In addition to searching for a new chief, Cooper said the police department would work with a public commission to review the agency's use of force policies and procedures. He said officials must address additional public safety demands, including a nationally televised presidential debate hosted at Belmont University in October.

Anderson has served 45 years at the Nashville police department beginning as a patrol officer. Cooper said he wanted people “to celebrate (Anderson's) tenure as its chief.”

“Chief Anderson is a thoughtful and effective leader – a dedicated public servant who has the admiration of his officers and the thanks of a grateful Mayor for his years of service to our community,” Cooper said.