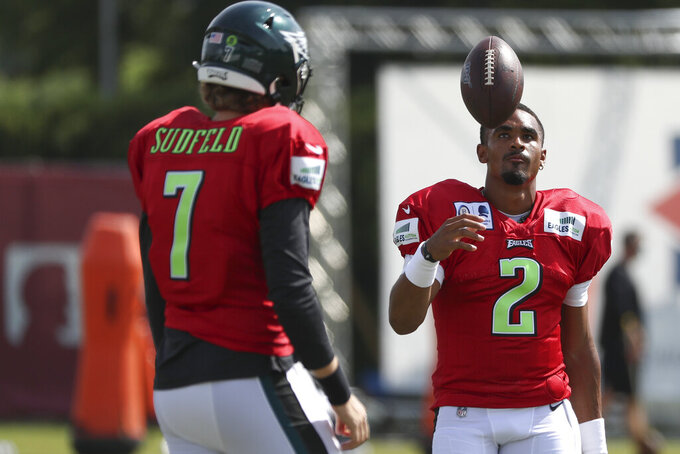 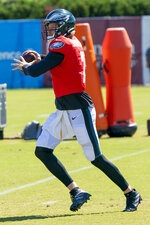 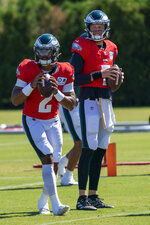 PHILADELPHIA (AP) — Nate Sudfeld has watched the backup quarterback play important playoff games for the Philadelphia Eagles each of the past three seasons.

Now he’s the guy one play away from being the starter.

“I want to stay ready,” Sudfeld said Friday. “You treat yourself like the starter. You make sure they can call the game with you in there like they do for the starter. I want to give the coaches confidence in me that I can go in and pick up where it was left and move it forward.”

Sudfeld was the No. 3 quarterback in 2017 when Carson Wentz tore two knee ligaments and Nick Foles stepped in and led the Eagles to the franchise’s first Super Bowl title. He was in the same role in 2018 when Wentz injured his back and Foles led the Eagles to an NFC East title and a road playoff win.

Last season, Wentz started all 16 games for the second time in his four seasons. But a concussion knocked him out of Philadelphia’s wild-card playoff game early and Josh McCown couldn’t pull out a win.

“I’ve been around a ton of great quarterbacks in general, including some great starters and backups,” Sudfeld said. “I think you can’t try to be like someone else. You have to be who you are and own who you are because guys really respond to authenticity. I can’t try to go out there and be exactly like Carson, Nick, Josh, or whoever. I have to be myself, make sure I’m prepared, and make sure I know what my process is and how that works for me to go out and be successful.”

Sudfeld has only thrown 25 passes in his four-year career that began as a sixth-round pick by Washington in 2016. He’s not even guaranteed the backup job after the Eagles spent a second-round pick on Jalen Hurts. Coach Doug Pederson said Sudfeld is “right now” the No. 2 quarterback.

“Nate has done a nice job for us, and Nate has come in and really done everything we’ve asked him to do from a backup position and really just moved the team when he’s in there, executing the offense, and that’s where he’s at,” Pederson said.

Sudfeld is disappointed he won’t get to showcase his skills in preseason games that were canceled because of the coronavirus pandemic. But he’s eager to battle it out at practices.

“You learn in this league to never assume anything,” Sudfeld said. “You have to go out there and earn it every single day. It’s a broken record, but rent is due every day. You have to bring it, so I’m definitely not taking anything for granted, and I am thankful for the opportunity that I have, and I am trying to put my best foot forward to help this team and keep improving as a player.”

Hurts was runnerup for the Heisman Trophy last year at Oklahoma when he threw for 3,851 yards and 32 touchdowns. He’s been impressive in training camp.

Sudfeld is among many who have noticed.

“Jalen has been awesome. I’ve been really impressed. He can really spin it,” Sudfeld said. “Everyone thinks that he is an athletic guy, which he is, but he can spin it. He is also smart in the (quarterbacks) room, and it’s been great having him in the film room.”