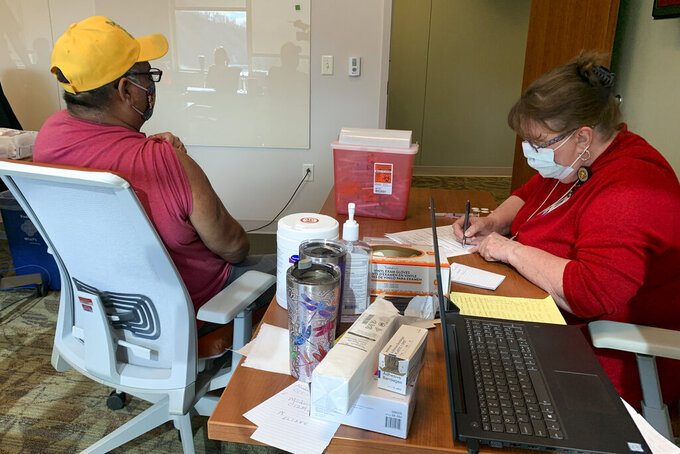 In this Thursday, Jan. 28, 2021 photo, a man rolls up his sleeve and prepares to receive the COVID-19 vaccine inside the hospital belonging to the Eastern Band of Cherokee Indians, in Cherokee , N.C. The native American tribe of 16,000 in Western North Carolina has faced little resistance while distributing the vaccine to tribal members. (AP Photo/Sarah Blake Morgan)

CHEROKEE, N.C. (AP) — Joyce Dugan did not hesitate before sitting down inside the Cherokee Indian Hospital for her second and final dose of the COVID-19 vaccine. “I’m proud of our hospital,” the 72-year-old former tribal chief said as a nurse quietly prepped her arm. “I’m proud that we’re able to get these shots.”

While minority communities across the United States have struggled to trust the vaccine, the opposite is true for the Eastern Band of Cherokee Indians, a Native American tribe of 16,000 in western North Carolina, and other tribes across the country, which were also quick to adopt coronavirus prevention measures.

The federal Indian Health Service said Tuesday that it has administered nearly 385,300 doses of COVID-19 vaccines. At a rate of about 18,490 per 100,000, that’s higher than all but five U.S. states, according to an AP analysis of federal data.

The trend owes itself both to a harsh reality — Native Americans and Alaskan Natives are four times more likely to be hospitalized from COVID-19, according to the Centers for Disease Control and Prevention — and tradition. Community before self has long been a core principle in Native American culture.

“We already innately have held on to that cultural tradition of taking care of our community," said Abigail Echo-Hawk, director of the Seattle Urban Indian Health Institute and a citizen of the 3,000-member Pawnee Nation. “The rest of the United States could learn from us."

In March, Eastern Band of Cherokee Indians Principal Chief Richard Sneed made the controversial decision to close Qualla Boundary, the Cherokee name for the tribe's reservation in North Carolina. Only tribal citizens and essential workers were allowed through police barricades, cutting off tourism and shutting down the tribe’s casinos, its main source of revenue.

“The data we were looking at told us that if we did nothing, we could expect that by April we would have about 400 positives,” Sneed said.

Feeling the financial strain, the reservation opened again after seven weeks — and as expected positivity rates rose steadily. The tribe has lost 10 people to the virus since March, but the majority of the 1,299 members who contracted COVID-19 have recovered.

The Navajo Nation, the country’s largest Native American reservation with about 175,000 residents in Arizona, New Mexico and Utah, declared a public health emergency in March even before its first positive case was confirmed. A flurry of public health orders followed, including a mask mandate, shelter-in-place orders, daily curfews and weekend lockdowns. Tribal leaders banned mass gatherings and ordered the closure of schools, four casinos and other tribal businesses, along with tribal parks popular with tourists.

The measures have taken an enormous financial toll. The casino enterprise laid off more than 1,100 workers in January after exhausting federal virus relief funding. It said it might be forced to close permanently if it cannot secure additional funding or partially reopen.

The Navajo Nation recently lifted weekend lockdowns so that residents could be vaccinated. So far, the Indian Health Service has administered more than 90,000 doses in the Navajo-area region. With support from the federal government, the tribe hopes to hit 100,000 by the end of this week.

“Everyone is knocking down the door trying to get a vaccine,” said the Navajo Nation's health director, Dr. Jill Jim.

In North Carolina, a major reason why members of the Cherokee tribe have not hesitated in stepping forward to get the vaccine is their hospital. Some Native American tribes rely on health care facilities owned and managed by the Indian Health Service, but the Eastern Band took over its health system in 2002.

Inside the lobby of the hospital built in 2015, “Ni-hi tsa-tse-li,” one of the Eastern Band's guiding principles, greets guests. In Cherokee, it translates to, “It belongs to you.”

The move helped mend a once fractured relationship between providers and patients. The strong bonds between them have paved the way for acceptance of the COVID-19 vaccine.

“Many of our health care providers have been here for 10, 20 years,” Dr. Rick Bunio, the tribe’s Clinical Director said. “The community trusts them.”

The hospital also didn't wait for people to sign up for vaccines. Instead of requiring them to compete with others on overcrowded websites, which has been the case in most states, hospital staffers identified residents of the reservation most at risk and then called each one of them to schedule an appointment.

“Our language is who we are. ... We want to do everything to protect that heritage,” said Vickie Bradley, the tribe’s Health and Human Services director.

Since mid-December, more than 3,000 residents have received at least one dose of the COVID-19 vaccination, according to the tribe's website. More than 800 have gotten two. The tribe would like to vaccinate more but is waiting for more doses from the Indian Health Service, which is working with more than 340 tribes and tribal organizations to distribute vaccines.

Inside the Eastern Band's hospital, Dugan exhaled quietly as a nurse pulled the tiny needle from her arm. “I’m relieved for our people, just as much as I am for myself,” she said. “We’ve had to overcome many obstacles in our history. And each time after each obstacle, we’ve become stronger.”