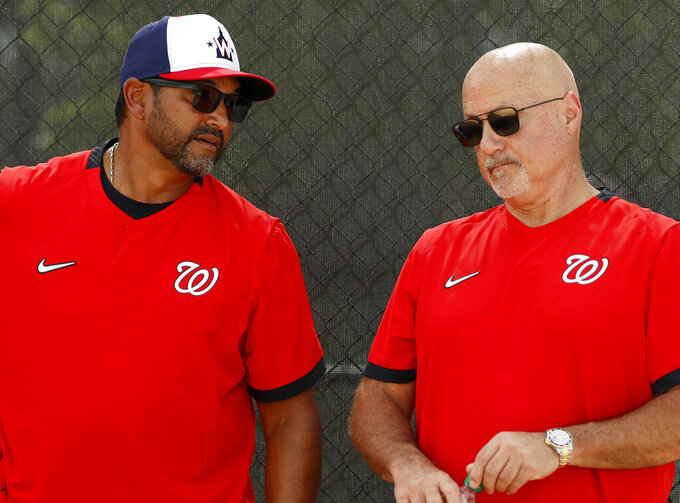 WASHINGTON (AP) — Washington Nationals GM Mike Rizzo’s top offseason priority is adding a middle-of-the-order hitter, likely a corner outfielder or first baseman — and by the sound of things, he won’t do that by trading for a certain past NL MVP currently with the Chicago Cubs.

Rizzo laid to rest any such speculation pretty plainly during a video conference call with reporters Tuesday.

“We haven’t had a serious conversation about Kris Bryant in probably two years. He was not a big guy on our radar, last year or this year,” Rizzo said when asked about the three-time All-Star. “He’s a great player, but at this point in time, with where we’re at and what we have in our farm system, and where we’re going, we think we can allocate our dollars and prospect capital in a better way.”

Both Rizzo and manager Dave Martinez spoke with the media for the first time since September — when Washington wrapped up the pandemic-truncated season at 26-34 and tied for last in the NL East, a year after winning a championship — and while both covered many topics, they made little in the way of real news.

“With conversations with ownership,” Rizzo said, when asked about his payroll parameters, “we feel we have the budget to get a championship-caliber club.”

One positive sign for the team: World Series MVP Stephen Strasburg, who threw just five innings in 2020 because of a nerve issue in his throwing hand, was re-examined on Dec. 4 and, Rizzo said, is “coming along great.”

“He should be full-go for spring training,” Rizzo added. “He began his throwing program a couple of weeks ago and he’s progressing nicely.”

Second baseman Starlin Castro also should be set for Florida after breaking his right wrist in August.

— Rizzo said the Nationals “do not have any official offers on the table right now” to free agents.

— Rizzo has spoken to catcher J.T. Realmuto’s representation but wouldn’t comment on Washington’s level of interest in any specific free agents.

— Yan Gomes could be the team’s main catcher and play “90 to 100 games, at least,” Rizzo said, but said he would want to add a “complement” or “partner” at that position.

— Ryan Zimmerman and Howie Kendrick are expected to play in 2021, although Rizzo hasn’t spoken to either, lately; Rizzo said Kendrick is “a guy that’s dear to everyone’s heart. If there’s the right role and the right situation, I’d love to have him back.”

— NL batting champion Juan Soto could play right field or left field — and, Martinez said, even offered to play center, if need be — depending on who the team adds to the outfield after Adam Eaton was let go.

— Carter Kieboom will face competition to be the starting third baseman. “I’m behind him 100%,” Martinez said. “I talked to him, and I told him: ‘Hey, you’re our future third baseman. And the future is now. So you’ve got to come to spring training and be ready to go. The job is yours, but you’ve got to earn it.’”