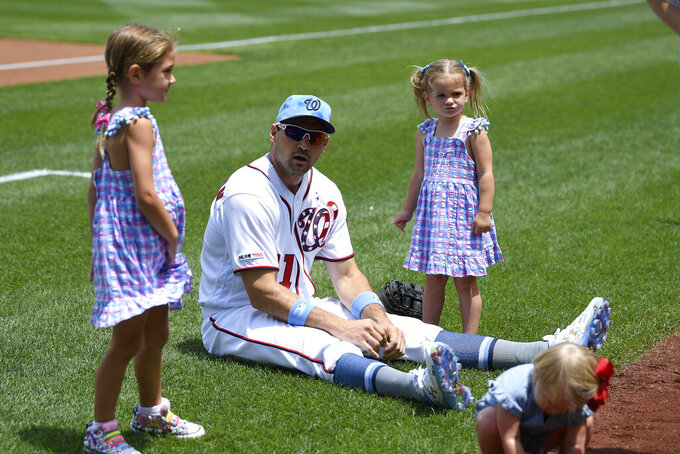 FILE - In this June 16, 2019, file photo, Washington Nationals' Ryan Zimmerman, center, sits on the field with his daughters Mackenzie, left, and Hayden, right, before a baseball game against the Arizona Diamondbacks in Washington. With baseball on hold because of the coronavirus pandemic, Zimmerman occasionally will offer his thoughts via diary entries published by the AP, while waiting for the 2020 season to begin. (AP Photo/Nick Wass, File)

EDITOR’S NOTE: Ryan Zimmerman is a two-time All-Star infielder who has played 15 years in the majors, all with the Washington Nationals. He holds most of the team’s career hitting records, and his two homers and seven RBIs last postseason helped the Nationals win their first World Series championship. With baseball on hold, Zimmerman is offering his thoughts -- as told to AP Sports Writer Howard Fendrich -- while waiting for the 2020 season to begin. This is the third installment; Zimmerman discusses the Pros for Heroes fundraiser he and his wife, Heather, are using to support medical professionals during the coronavirus pandemic.

Heather and I were at home, like, ‘We’re just sitting here. What can we do over the next weeks or months -- or however long this thing lasts, where people are really battling at the hospital -- so we can help out?’

We realized there are a lot of athletes who can give money or use their social media reach to give this a boost. We wanted to start a fund to give athletes in the D.C. area a way to come together, raise money and pump it directly right back into the community, to the hospitals and to the health-care workers in the D.C.-Virginia-Maryland area.

Those people are fans; they come watch us play. Whether it’s the doctors, the nurses or the patients, these are the people that allow us to do what we do. So this is the least we can do to give back.

A bunch of teammates donated. The Scherzers donated. The Corbins. The Strasburgs. Anthony Rendon and his wife donated. (Capitals forward) Nicklas Backstrom made a generous donation.

I plan to talk to Ryan Kerrigan to try to get some of the Redskins involved. I’ve talked to D.C. United head coach Ben Olsen. I’ll reach out to the Mystics.

This started with giving hospital staff and their families food when they get off their shifts. We were told that’s a huge burden off their backs, to be able to bring dinner home, not have to cook.

These people are working around the clock, so to have a nutritious meal for them and their family is huge, as is the stress relief: It’s already made, there’s no dishes to wash afterward.

Now we have the ability to do the meals and also get into donating medical supplies, whether it’s masks or gowns or protective equipment for people helping patients with the disease, so they don’t get infected.

As this thing really grows, we can really make a difference, which is great to see and shows you the power of athletes if they work together. We started Pros for Heroes this week, and by Tuesday night, after the Zoom call on Facebook with my teammates (during a TV re-airing of Game 7 of the World Series), we already had raised over $200,000.

It was cool for us to relive it, because when you’re playing in the game, you don’t see a lot of the things that you notice when you re-watch it.

I didn’t realize how long Patrick (Corbin) pitched. He was one of the most underrated players for our whole playoff run. This guy’s a top-20 starting pitcher in the entire league and just signed a $140 million contract and was literally doing whatever we needed him to do all postseason: Throwing out of the ’pen; coming in on what’s supposed to be his side day.

A lot of guys would just say, ‘Nah, I’m a starting pitcher. I don’t want to do that.’ He pitched three innings out of the bullpen in Game 7. I mean, what?! I knew he pitched for a while, but when you’re in a game, and you’re worrying about what you need to do at first base or in your at-bat in the next inning, you kind of get lost in it all.

So to re-watch it and see how many outs he got us was unbelievable. (Astros starter) Zack Greinke was really good that night. Zack’s been a really good pitcher for a long time, but the last couple of years, he hasn’t been what he was four or five years ago. That was one of the best games I’ve ever seen him throw. Re-watching it, I was happy to see him leave the game.

I hope it was fun for the fans to hear our perspective and see the group of guys that we had. That’s why we won the World Series last year: The group that we had, the personalities, how much fun we had together.